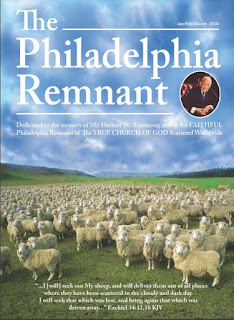 In thumbing through the various COG magazines on offer it's easy to overlook some of the minor entries. Publishing a bi-monthly magazine is still seen as one of the received traditions in the Churches of God. The Plain Truth may have morphed into an empty Albrecht echo chamber, but the work of publishing the Gospel must go on, verily.

The Philadelphia Remnant is another of the lesser-known contenders. Produced by Don Billingsley, famous in COG history as the driver of the vehicle which killed passenger Richard David Armstrong, the 42-page January-March issue oozes with references to Herb, the late lamented all-wise one.

The feature article has been disinterred from a 1957 Good News, Why America is Cursed! by (who else?) the high and herbal one himself. Don's long editorial notes the thirtieth anniversary of Herb's death and announces that he was the Third Elijah (the other two were John the Baptist and, fairly obviously, Elijah himself). Lots of pictures of the End Time Elijah too.

There's an article about Lake Erie and how we'll all have clean water in the world tomorrow, and another about school violence (illustrated with a black kid holding a gun, hewing to the stereotypes).

Don's rag doesn't advertise its circulation, but we're probably on very safe grounds assuming it doesn't have one as there doesn't seem to actually be a hard copy option. Oh well, no matter, a virtual magazine apparently still ticks all the boxes; and Don is in good company here (notably COGWA's Discern.)

No surprise that it's a bunch of sheep gathered on his cover.

Ah, yes. "Why Is America Cursed?" I read this 1957 classic recently myself, and included quotes from it in my blog article called "Signs of the Time" which was part of my "Wonderful World Tomorrow--What it WON'T Be Like" series. I'm going to guess that I used the material from Herb in a slightly different way than Mr B does. Seeing as how the answer to the BIG QUESTION that Herb asked was...America was cursed in 1957 because it had fallen prey to the Communist-inspired Civil Rights movement.

" Mrs. Eleanor Roosevelt has fallen under this delusion, and other public leaders have started a trend in America which makes segregation, which God COMMANDS, appear to be sinful and evil, and which makes a mixing of races, which GOD CONDEMNS, appear to be Christian and good! "

Strangely enough, many of the biblical prophets said that Israel (which by Herb's definition meant America) would be cursed because they neglected the poor...and the stranger. (The "stranger among you" according to Herb was always "the Negro.") I must admit that Herb never neglected the Negro--he wrote a lot about that race. He just consigned it to move back to Africa where he belonged. In fact, he expected it to be forcefully moved en mass back at the beginning of the Millennium, under a Great Relocation Program headed up by the resurrected Noah hisself. Who would get the job because he had been so good at keeping his own kids from miscegenation.

You can read more about the Curse on my blog here...

Signs of the Time

I recall that the chief spokesmen for racism in the WCG were Waterhouse and Blackwell. Blackwell spoke to the issue of re-segregating the races. Waterhouse spoke of how HWA was like Noah - pure in his generations. What they said was always BI-centric. It wasn't about getting the Whites out of Africa. It was about getting the Africans out of "Israel." To their credit, Waterhouse and Blackwell did not add Anti-Semitism to the mix. That ingredient was added on the Big Sandy campus in the Seventies. Goebbels and Rosenberg would have been proud.

I believe that people pragmatically should marry as close to their own background as possible. Marriage is a dicey proposition at best. One of those things that goes poorly for the large majority of people. A person needs all the help they can get with this challenge and introducing needless conflicts doesn't help. But I do not believe that racial intermarriage is a sin.

I recall the consternation on the BS Campus when HWA married the second time. Originally his second wife was described as Black. Then she was described as brown. It did turn out that she was a significant part Native American. Many at the BS Campus threw a sop to normative behavior by citing the fact that Moses married an Ethiopian.

I do recall that one of our erstwhile BS ministers in public responded to the first rumor that HWA married a Black by saying that HWA would never marry a n****r.

Interracial marriages can be more challenging when there are significant cultural differences. Many people of color come from families that have been culturally assimilated. Those still from the original culture refer to the assimilated ones as having been raised "white". There really are not any more personal challenges involved in marrying an assimilated one than in marrying from one's own group, other than needing to occasionally face the racist prejudices of ignorant outsiders. In many cases, opposites tend to attract, and external forces cause the bond between them to be stronger.

Many non-racist Bible students teach and believe that the impurity in generations prior to Noah was due to intermarriage with the Nephilim, or perhaps with previous versions of mankind, such as Neanderthal. The fact is, significant Neanderthal genes have been discovered in certain Europeans living today.

One thing is certain. God would not flood and destroy the known world because of intermarriage, and preserve two "non-white" races through Noah's sons who had commited the very act for which the rest of humanity had been destroyed. There must be another type of purity in generations which would explain why Noah's family was spared. But, hey, racists are usually some of the most ignorant excuses for humanity walking the face of the earth, and would probably look no deeper.

Most of the book of Genesis can and should be explained from humanities transition phase from hunter gatherers to farmers.

In general hunters are taller people than farmers.

This explains why the Nephilim were described as "tall."


Being farmers, living together in groups brought all kinds of curses that needed to be explained. (Like foot and mouth disease and many many other "curses and disease."

Hence the invention of a religion that needed all kind of ritual to appease the "cursing" God.

Floods are a curse only too farmers. (Look at Bangladesh.)

Farmers can just walk away.

The race thing is an insertion that others can expound on taking my theory on the hunter gatherer - farming transition as a starter.

Hunters can walk away from a flood.

Another "curse" was that Eve suddenly had to endure a type of pain in bearing children that was significant enough for the tradition to be noted.

This was of course a result from the transition from taller "hunters" to "smaller" farmers.
While the unborn children were still "big" in the transition phase, the women were already smaller. Causing a notable change in the pain level during childbirth that was noted by the oral transmitters of the history of mankind.

What is he thinking? "The racists, misogynists, and xenophobes are climbing out of the woodwork. Must be safe to come out finally."

Looks like the South finally is rising again. Hopefully Jefferson Davis Trump will lose Civil War II, and his stormtroopers will all scurry back into their holes. Faithful COGlodytes may not vote, thankfully, but if they did, and Trump gets the nomination, we all know who they'll be rooting for. After all these years, and there's still so much reconstruction left to be done...

"America is falling victim today to the Communist propaganda of MIXING THE RACES, contrary to God's com­mands! God Himself scattered the races at the tower of Babel. God decreed they shall remain SEGREGATED until the end of this world, and the coming of Christ.

"Communism stands for amal­gamation of the races, until there will be but one race again. They disseminate this propa­ganda among the Negroes of America. Mrs. Eleanor Roosevelt has fallen under this delusion, and other public leaders have started a trend in America which makes segrega­tion, which GOD COMMANDS, appear to be sinful and evil, and which makes a mixing of races, which GOD CON­DEMNS, appear to be Christian and good! This has nothing to do with race superiority or racial DISCRIMINATION. God condemns racial discrimina­tion, but COMMANDS racial segregation. There's a vast difference! Today people con­ fuse the two as though they were the same!"

What terrible, racist, McCarthyite propaganda. And COG-FF chooses to publish these words today in their magazine? How disgraceful.

Previously one of LCG's writers was one Mark Mendiola. He left LCG to join Pack's RCG around 2005. After that he left and joined COG-FF. Although his name does not appear on this latest issue of COG-FF's recruitment magazine.

I was a communist when young and I never heard this expounded from the red pulpit. Its bullshit! Herb was an expert on nothing but for the con he ran. Yes indeed, very good for a former soap salesman with a rightist political view, with a race war wish that destroyed thousand of humans by separating them from the sane world.

When Bill dies, the race is on for a replacement and the winner will be another HWA clone. At least until the last old armstrong supporting codger dies off. Then its oblivion for the group. A lifetime wasted in pursuit of what?