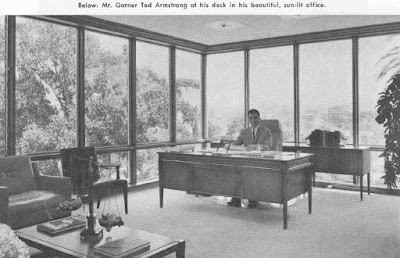 Rod Meredith's references to Garner Ted Armstrong in Inside Story are intriguing.


"Later, God struck down Mr. Armstrong's two sons, Richard David and Garner Ted, and brought them to repentance and conversion. This is more significant than it may seem, because for many years it looked as if they might never be converted - but only continue to regard this as "Dad's religion."


"Garner Ted Armstrong surrendered to God and was changed by Him so completely that it amazed those of us here that had known him."

A somewhat back-handed compliment, and not entirely truthful (see chapter 6 of Marion McNair's book or the feature articles in the 1977 magazine edition of Ambassador Report). Ted was way off the rails, but now Rod generously deigns to give him the seal of approval. The passage smacks of a pat on the head by someone who regards himself as Ted's superior. The truth seems to be that while GTA was increasingly the voice of The World Tomorrow, had his by-line appear regularly in church publications with the nice office and the title of executive vice president, he was largely frozen out of the decision-making process, a situation that lasted from 1958 through till 1971. Rod - with the smaller office and less exalted title - was the more influential of the two by far. Whatever else you can say about Rod, he was always ambitious. It's not hard to imagine that he was flummoxed at being pushed aside in the line of authority - on paper at least - by the upstart sons. Could there be some kind of subtext in Rod's encomium to Ted? Consider Rod's choice of words when describing GTA's office. "The decor of the room exhibits definitely masculine tones" (caption no. 2) and "Certain decorative features of his office reflect a definite masculine personality." (p.26, emphasis in original).

What is that all about? Nobody else is so described in the booklet.


"Mr. Ted Armstrong - as many of you may know - has an unusually wide range of interests and abilities in various sports and outdoor activities. When time permits, he is an excellent hunter, fisherman, and plays a fair amount of basketball, handball, golf and other sports." (p.27)

Which is all true. But no mention of Ted's skill in painting or his undoubted musical talent. Rod seems to be stressing Ted's macho nature, the masculine sportsman. It's almost as though Rod is trying to be reassuring. What's going on here? Given his predilections as a casonova, this hardly seems the buildup he needs.

What Rod was hinting at was that GTA might have homosexual tendencies. The Rod seems to be raising doubts as to Ted's sexuality.

From AR61 we read about the son:

"GTA, himself, refused to attend the Dallas meeting. Instead, he sent his son Mark along with myrmidon Vance Stinson. Mark, whose arrogance seems to exceed that of even his father, is not a CGI minister or Sabbath group host. Many claim he is not even baptized, and some of us recall his days in Pasadena when his homosexual tendencies were all too obvious (not too many ministers' sons in those days carried purses and made sexual overtures to male Ambassador students; Mark was a flaming exception). Nevertheless, the overly kind CGI group allowed Mark to speak. He defended his father and since then his attacks on those questioning GTA's character have gotten more strident. Of course, he says Satan is behind this rebellion and, as theologian Mark sees it, Hufton and Justus had no right to question his old man's behavior. What will be the outcome of the Dallas meeting is unclear. CGI spokesman Bronson James has stated that GTA and his loyalists will not listen to their critics."

"Garner Ted Armstrong continues to openly associate himself with the Church of God, International. I have obtained a new booklet authored by GTA. It is titled, "You Can Take It With You!" On the back cover it clearly states "Copyright 1996 The Church of God International, Tyler, Texas." As we were already informed, no functional break ever occurred between Garner Ted and the CGI in re morals charges against him. Mr. Les Pope, a former CGI minister and board member [see AR53, p. 9], told me that some of the CGI ministers did their own field investigations and discovered that many other masseuse establishments in Texas and surrounding states have maintained Garner Ted's name on a list of unwanted clients for a significant number of years.

A confidential source in the Chicago area, a former WCG member who is gay, recently explained to me what is believed to be the origin of Garner Ted's sexual escapades with women and girls. As reported to me, when Garner Ted was a young man, he apparently was living with another young man in a gay relationship. When his father, Herbert, found out about it he yanked GTA out of this gay relationship and commanded him never to participate in such a life-style ever again. So long as Garner Ted remained away from gay involvements, Herbert Armstrong looked the other way in regard to GTA's many heterosexual involvements. This long-established, family-based behavioral programming may account for the constant denial of sexual misconduct by GTA in spite of the extensive documentation of his lifelong problem."

Oh boy. On the one hand, I would prefer not to believe this of GTA. On the other hand, experience has taught me that these people were never, ever who and what they said they were. That disconnect, and the cognitive dissonance that it was nearly guaranteed to have caused, led to dual lifestyles, and much concealed behavior. Unfortunately, nothing would surprise me about the HWA/WCG movement at this point in time.

"A confidential source in Chicago area, a former WCG member who is gay..."

That is pretty "light weight" as evidence. Gays sometimes feel a great missionary spirit about homosexuality. Some not only advocate homosexuality but they tend to see it everywhere. Some believe that everyone is homosexual to some degree or another. It just takes the right conditions to pivot a heterosexual to a homosexual. Unless there is any real evidence, this account is just titillating hearsay.

"GTA, himself, refused to attend the Dallas meeting. Instead, he sent his son Mark along with myrmidon Vance Stinson."

I can't speak for Mark, but I can tell you for certain that I was not sent to the Dallas conference by GTA or anybody else. I decided to accept the invitation to attend when a church member, a lady whose family had been in the COG for many years, convinced me that it was the right thing to do. I did not consult GTA at any time; nor did I seek anyone's permission. It was my own decision. (The people who know me best had a lot of fun with that "myrmidon" description.) --- Vance

Maybe RM had a mancrush for GTA?

"So long as Garner Ted remained away from gay involvements, Herbert Armstrong looked the other way in regard to GTA's many heterosexual involvements."

Are you implying that GTA was secretly kicked out because he went back to the "gay way"? or that RM played ball till he felt he could manipulate HWA to go back on his word?

This office only has 8' ceilings!
Thus the need for a megabuck Hall of Administration with a more palatial feel.