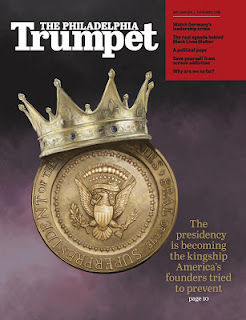 The Living Armstrongism blog has a review of the latest issue of PCG's The Trumpet. The cover speaks for itself. "The issue contains an inflammatory cover made by Gary Dorning trying to stir up resentment and fear of President Obama. PCG leans far to the right in regards to politics so they wish Obama was not president." (Redfox).

American politics; sheesh. Bear in mind that traditionally the COGs have pretended to be politically neutral, discouraging their members from voting. The reality is somewhat different. Herbert Armstrong's political views were well known, and church publications leaned heavily in advocacy journalism. That is even more apparent in the squabbling sects today. 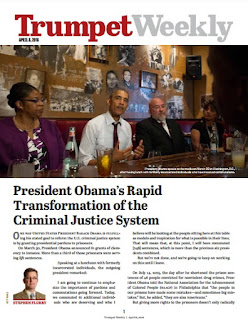 The latest Trumpet Weekly apparently beats the same drum. The cover is supplied by a reader in the States, and features another political piece by heir presumptive, daddy's pride and joy, Stephen Flurry.

More interesting is the question of how many COG members ignore the non-voting advice. I can say, hand on heart, that I voted throughout the years of my WCG membership with a clear conscience (and I'm darn sure I didn't vote the way the ministry would have supported). Anecdotally one suspects that a substantial part of the COG demographic does indeed turn up to cast a ballot though most wouldn't admit it.

For the full baloney rundown on this issue (baloney as in the mag, not the review), hit the link above.
Posted by Gavin R at 12:27

Thank you for the mention. It is much appreciated.