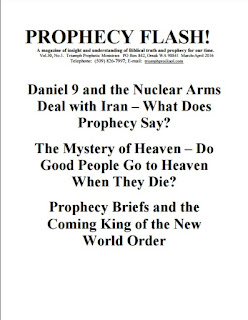 One of the enduring characters on the fringe of Armstrongism over the decades has been William F. Dankenbring. The one-time Plain Truth writer launched a publishing operation in the 1970s featuring his own work, but also that of Raymond McNair (Ascent to Greatness) and Ivor Fletcher (The Incredible History of God's True Church). Basil Wolverton provided original artwork for his The Keys to Radiant Health, and Herman Hoeh agreed to write the foreword to his creationist tome, The First Genesis. Somewhere along the path, though, Dankenbring "jumped the shark" and became a date-setter with few peers. For many years now he has produced a periodical called Prophecy Flash! to promote his predictions.

Anyone who has read Dankenbring's guff in recent years knows just how much he loathes President Obama. We all have our personal political views - that's the foundation of a democracy - but Dankenbring drapes his biases in lurid biblical fantasy. The current Flash (March-April) is no exception. Some of the headings from the 'Prophecy Briefs' section.

And how about this:


Earlier this year and also last year I wrote about the signals that some thought Obama was emitting to be the Muslim Caliphate, that is, the Islamic leader of all the world's Muslims. He might indeed be acceptable for that position.

To keep your disgust fresh, the current issue is available as a PDF download, but be aware that there may be a significant mental health risk involved.

The alleged accuracy of Armstrong-inspired prophecy has been sold to members of the movement based on God only revealing truth to those who keep key oracles from the Sinai covenant. By this point in ACOG history, and probably much earlier for some people, the continued failure of the prophecies must be calling into question whether such things as sabbath-keeping do set teachers up to have prophecy revealed to them. In fact, the sabbath keeping seems to have the opposite effect. It fills people with ego, makes them go off the deep end, and into the realm of the ridiculous. Hasn't it occurred to these people that their continued failed prophecies are seriously damaging the credibility of the core beliefs, the way of life which they have established?

Amongst internet resources, the moment I see ridiculous prophecies being made, I automatically wonder if the "prophets" are in any way connected with Armstrongism. In many cases, there is that connection.

Of the several splits and one man bands that occurred in the 1970s, Dankenbring is one of the very few that have endured, and his work will disappear once he passes. The other one that has endured and is in a similar spot is Ken Westby. Both men must be close to 80 years old.

I remember Bill Dankenbring from back in the day before he left WCG. He didn't seem any more odd than anyone else. Of course, it is true that my frame of reference was skewed toward the odd. Still, he seemed like a relatively normal family man at the time. It's surreal to contemplate the bizarre career he had ahead of him.

When we were freshmen at Ambassador, he was as normal as anyone walking around on the street, except for having applied to Ambassador. Of course, we had all done that, so it seemed like there was nothing odd about him at all. Stephen's remark indicates he stayed normal for quite a while after that. I wonder what came over him.

Dank used to be just a bit wacky, but by 2008, he became certifiable. I have a short profile of him on my Field Guide (see link below) which includes the following comments:

"William F Dankenbring, founder of Triumph Prophetic Ministries Church of God (TPMCOG), has long been addicted to gaudily splendiferous webpage announcements made up with an extreme variety of font sizes for what he evidently supposes to be effective “emphasis.” In early 2008 the following was on his website, explaining the founding of TMPCOG. You need to see the original to get the full effect –the largest font was 72 points high!" Here's the wording...go to the link to see the goofy original.

"The 21st ANNIVERSARY
of God’s
ACTIVATION
of Triumph Prophetic Ministries as the replacement, “obedient” CHURCH OF GOD,
Replacing the WCG as God’s True Work
On January 17, 1987 – one year exactly from the date Herbert W. Armstrong died!"

Here's the link to his profile on my website, for those who'd like a bit more of his history.


Now that I think about it, Herbert was addicted to USING ALL CAPS FOR EXTENDED PASSAGES TO EMPHASIZE since that was all he could do on a typewriter. He didn't even have access to underlining or italics when composing. But I can only imagine what he would have done if he had had access to computer word processing back in the day so that he could have mixed various font sizes and fonts into it all for emphasis too! I imagine it might have looked like Dankenbring's visual riot.

I doubt Bill has much of a following these days, probably never did, but the folks he had could be pretty "dedicated." Such as this letter from a fan in 2000.

""Thank you for the PF [Prophecy Flash] and the TAPES!! I am so greedy, it took me only 3 days to listen to your 12 Tapes! As you may have noticed -- I get very nervous when your material is DELAYED, and if by a very BAD CHANCE --- I don't get it AT ALL -- I go mad!! It's the price you have to pay for being so VITALLY INDISPENSABLE in our life, Dear Bill!! So, please make a careful note in your computer of my new order if you please . . . .

"Your impatient sister in Yeshua! God Bless you!

I didn't remember paying very much attention to Dankenbring's name during our sojourn in WCG from 1968-1978. But since it is kind of an odd name, it does stick in your subconscious. So on the way back from the Feast of Tabernacles with the CGI in 1979, I remember being startled to see his name on a mass paperback book on the shelf in some souvenir shop. Star Wars had debuted in 1977, and Bill had jumped on its coattails by titling his book "Beyond Star Wars." I believe he was still part of the WCG at the time, and it was odd to see a WCG author able to branch out with his own publication not exclusively published and distributed by Pasadena (other than Raymond McNair.)

You can still get used copies of the book from Amazon. A couple of fawning readers have commented on the Amazon page for the book, including this...

"FROM THE BACK COVER: Long, long ago...battles raged in the universe. A great war caused tremendous destruction throughout the cosmos and upon the Earth. Super powerful beings battled for control of space and time. Awesome cataclysms shook the planet Earth repeatedly. The Earth survived. Other planets may not have been so lucky. Abundant evidence attests to the cosmic struggle that battered, bombarded, blasted the earth on an interplanetary---perhaps even a supra-galactic---scale. Beyond Star Wars reveals this evidence, telling the incredible story that lives in the heavens above; in the rocks benearth our feet; and in the records and legends of ancient peoples.

"MY THOUGHTS: I kept buying this book and giving it to members of my family. So far, I've bought five copies. If you've ever had questions about Atlantis, Easter Island, the Exodus of the Bible, Noah's flood, Joshua's "long day," Neanderthals, UFO's and other "cosmic" encounters, then this is the book that offers some of the answers. It may be an older book, but it is excellent reading, and I hope that I can find enough copies to meet the demand of my friends and family! Highly recommended!"

All that galactic stuff, of course, is referencing the WCG doctrine of the alleged "preAdamic" gigantic supernatural battle between Satan and his demons and the angels of God. Which supposedly pockmarked the moon and such.

I remember back in the Nixon administration hearing from the WCG pulpit the quote from the OT that went "you shall not speak evil of your leader." But, now, with Obama in office, it seems to be "fire at will." Do you think it might have something to do with the fact that he is African-American? And that Armstrongites are blatant racist? Dankenbring just reflects the views of his spiritual community.

It is interesting that the statement about "the stranger will be the head and you will be the tail" was oft quoted in sermons tinged with alarmism and paranoia. Never quoted to my knowledge was the statement about "you shall not oppress the stranger within your gates." But it would not be the first time Armstrongites evinced a "pick and choose" approach to scripture. Scripture was always passed through the Herbert Filtration System (HFS)before it was presented to the flock.

Dankenbring was a PT writer who was laid off (or maybe fired?) in the late '70s. For a time he tried to make a living selling real estate (and maybe insurance). When WCG transferred me to one of the Arizona facilities after the receivership, I used him as my real estate agent to sell my house in Pasadena. I found him to be both dishonest and incompetent.

NEO~ that respect for the office only seemed to apply if Republicans were president. Philosophy transcends race for these folks.

When Hillary wins the election in November, can we even imagine what the ACOGs will be saying??? They'll be revising their prophecy timelines so fast that it will
make peoples' heads spin! But, that's the way people who are stuck in the past, and whose lives are dictated by prophetic fantasies tend to speak and act.

Why would anyone want to "keep [his] disgust fresh?" Why not do productive activities with people whom you admire and enjoy? Why think about things that you find disgusting?

Spending much time and effort thinking about, writing about, discussing about, reading about, is akin to worshipping these religious organizations and the folks who serve in them.

Byker Bob. I think your prophecy about Hillary winning the election in November '16 is drastically in need of revision so fast, it will make people's heads spin. That is how people stuck in the past whose lives are dictated by prophetic fantasies tend to speak and act. TOUCHÉ!
Peter Holt.