Bob throws his toys at John

... if Bob has "stretched the truth" on this matter, how can anyone believe a word he says on anything else. 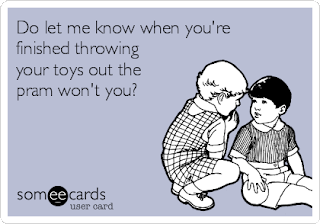 Bob Thiel must be feeling brittle after having the headlights turned on his claims recently. Gary Leonard has been relentless, and the immediate past posting here also raised important issues for Bob's credibility. Bob, however, has decided to vent his spleen at John Carmack, a COGWA member who operates the Church of God Perspective site. Over to you, Bob.


While I cannot address all the lies and innuendoes on the internet about me, since someone who claims to be in the Church of God has once again posted false and misleading statements about me, that perhaps this would be a good time to answer lest those who believe such things feel that they are wise in their own eyes.

Actually, Bob, it wouldn't be at all difficult to clarify the little matter of your ThD credentials. But more on that later. Here's Bob's post. I guess I'm not completely unbiased here, but I find Bob quite incoherent in parts. In fact, his defense of his own 'specialness' seems downright pathetic. But what do I know, if you're up to it you can click across and judge for yourself.

What is interesting is that Bob chooses to respond to John, but not address issues others have raised. Is that because he can't?

The issues around the legitimacy of Bob's CV are quite straightforward, relying on matters of fact, yet Bob keeps fudging. It's important because if Bob has "stretched the truth" on this matter, how can anyone believe a word he says on anything else. How simple would it be for Bob to type up a proper CV that lists and documents his qualifications rather than grandstanding and evasions? No need to "answer detractors" - just provide the documentation.

If Bob doesn't know how to set out an academic CV, I'm sure he can find lots of examples online.

Understand this buckos, if you haven't attended Ambassador College for four years and have been a minister in good standing, you have absolutely NO credibility to evaluate any Armstrongist ministers -- no matter how 'spiritual' and 'converted' you may be.

It isn't enough to have God back you -- you must have the implied imprimatur of Herbert Armstrong, the end time Apostle.

Thiel is the mouse that roared. An observer becomes embarrassed on his behalf, and in ways that somehow whiz past the pseudo-doc's own over-sized head.

Duh you guys. How silly can you all get TCU is Texas Clodhopper University.
They issue ThD's upon completion of the home study course which includes a 10 page booklet and a true/false test.
I took the test myself and passed (or as Bob says 'past' the test.)
I realize now that had I gone to Drew University I could have a fabulous paying job as a Methodist minister at 35,000 per year! But no, and now I am stuck selling used underwear on consignment.

I'm not sure this guy is worse than any other Armstrongite.

Everything out there in COGdom is either an exaggeration of or a diminishment of Armstrongism. The terms "worse" or "better" are nearly irrelevant, because it has all gotten ridiculous since 1975. When their prophecies failed, the movement should have failed. But people continue to make their excuses, and to ratchet up the volume as if that will somehow bring it all to pass.

Respectfully, when does it ever occur to you that the movement reached its Zenith, in all aspects, in the time period after you left. In all instances it peaked until 1991. It failed miserably in preparing the movement for a phase after the founder died. But after all didn't Stanley Rader put in writing in 1981 that (he believed) there would not be a successor to HWA. (and he was in full control as you know, in my opinion even consulting in tkach time but I cannot prove that only that he was paid 200.000 dollars every year until 2001). It all followed the cycle of the lifespan of the '60s trained "ministers" (who were then in their early twenties). Up to this very moment when, as noted, all energy has faded.

From an AC educational perspective your days were probably the highdays. Although in the nineties ac was officially accredited by educational authorities.

To engage your view on 1975. In 1989 press and bookwriters contacted wcg about German Unification. (among those the writers of conspiracy books like holy grail, holy blood, the book Dan Brown based his entire fiction on) The "worldly" press remembered that wcg had spoken about "prophecy regarding german unification" (which in reality had been US foreign policy since 1944). The official wcg statement at that time already was, that the unification had no special significance. Signalling commencement of the first major split offs after 1986.

After 1975 wcg reached its peak in membership, income, prestige and major changes in lifestyle. (probably because ideas on childrearing had changed by the time and ministers started raising children themselves). Make up was not regarded a sin for a while, until the 1890's born founder discovered the ugly make up styles of the late 1970's. A far cry from the modest make up style of contemporary days. What else could his reaction be than the 1890's motivation for abolishing make up again. (that is for all the sin-thing he quoted) Whereas in some literature hwa says that he was just appalled by the manner in which make up was used in 1977 and 1978.

Now to keep it civil,
since bottomline I am on the side of the defectors. I would highly recommend.

Superforecasting: The Art and Science of Prediction Hardcover – September 29, 2015
by Philip E. Tetlock

"I'm not sure this guy is worse than any other Armstrongite."

There's different criteria upon which "worse" could be judged.

He's not worse, in terms of being delusional and narcissistic than HWA, Dave Pack, Gerald Flurry, or any other COGlodyte that has pretended to take latter-day biblical roles and titles unto himself. But having done so, he's adding to the competition these bottom-feeders face in their quest to be the #1 Worst.