Good news, you no longer need to remortgage the house in order to acquire a copy of David Barrett's study Fragmentation of a Sect: Schism in the Worldwide Church of God. Oxford University press is releasing a paperback edition (with a few very minor revisions) later this year. 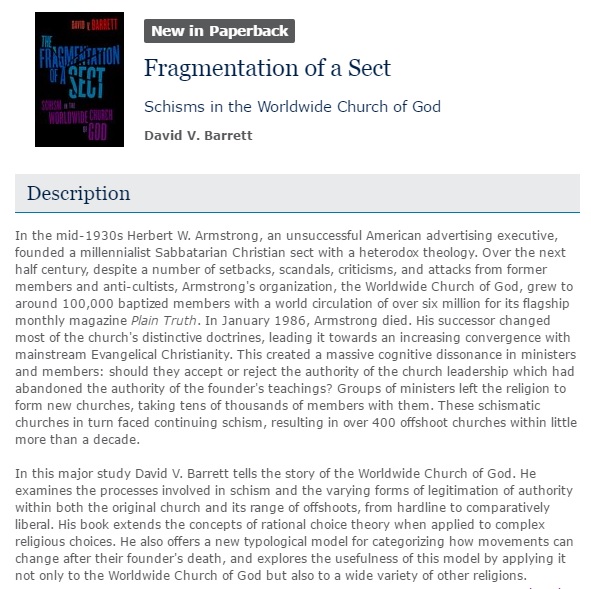 This is an academic work focused on the sociology rather than the usual agenda-driven stuff that tends to be published elsewhere. If you prefer debunking and steamy apologetics larded with Bible texts, this probably isn't the book for you. In my view, however, the story of the dissolution of the WCG is better told without the invective. It's a story that speaks for itself, and David Barrett is one of the keenest observers of the COG phenomenon. If it helps, I'm told Joe Tkach hated it - which in my view is the ultimate recommendation.

You're going to have to wait till August to get your hands on a copy, but preorders are being taken with a price tag of $29.95 US/£19.99 UK. If that sounds expensive, be ye aware that the nice people at OUP in NZ have the locally sourced hardback edition listed at just under eighty smackers, so quit with the complaining. Amazon currently has the HB at $61.

An ebook edition you ask? Sadly not the Oxford way.

More on this closer to August.

You can find much cheaper copies online via bookfinder.com

I could not wait for the publication of Barrett's "Fragmentation of a Sect" after learning about it through either you, Gavin, or Gary. I pre-ordered and got it that same December it was published. It didn't disappoint.

I had previously read his much larger book, "The New Believers"(2001) which had an extensive section of on the WCG and its splinters. I have been collecting books, monographs, theses, papers, and articles on Armstrongism since 1972 when I first purchased Seventh-Day Adventist theologian Harry Lowe's "Radio Church of God: How Its Teachings Differ from Those of Seventh-Day Adventists". I accepted Armstrongism despite reading that lengthy critique.(But harboring serious doubts about BI from that read.)

The value of Barrett's work vis-à-vis Lowe's and other partisans and belligerents is that it is dispassionate, scholarly and detached. Readers of these anti-Armstrongite blogs would benefit from that kind of impartial, objective analysis of the movement. Emotions of hurt, resentment, bitterness, hostility and remorse distort rational thinking. David Barrett and the late Joseph Martin Hopkins, another scholar on Armstrtongism("The Armstrong Empire",1974) provide very valuable perspectives; though the perspectives of insiders are valuable, too, for personal experience cannot be discounted. So I expose myself to both. But your readers need to expose themselves to an outsider's perspective. I paid the heavy price for that original hardcover book and it was a good investment.

John Buchner, an Australian whom I think is a former Armstrongite, also did a doctoral thesis on the movement, focusing on its change to Trinitarianism. I had previously read his "Armstrongism in Australia" monographs