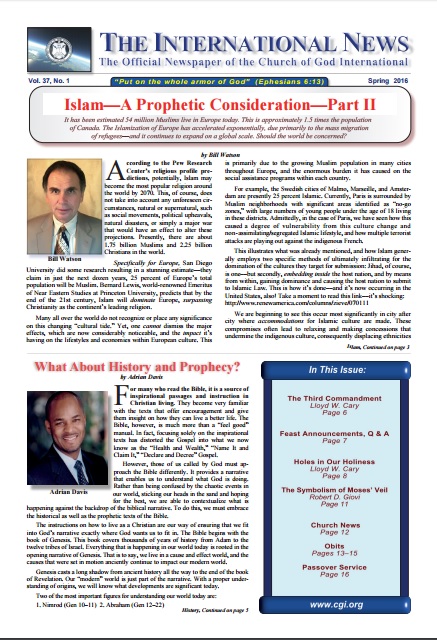 Those of us who are sufficiently long in the tooth may remember the days when Ted Armstrong struck out defiantly from his father's dominion, and the heady sense of  "a new beginning" in East Texas. The good (and not so good) and the great (sometimes just grating) gathered to the new ensign. Guest preachers in Tyler included Al Portune, Wayne Cole and David Antion bearing the 1978 equivalent of gold, frankincense and myrrh. Ron Dart became second in command. The Church of God, International was launched with high hopes and tasteful offices on the shores of Lake Palestine.

Ted knew the power of publishing as well as radio and TV, and moved quickly to create a stock of new booklets, and a rival for The Plain Truth was launched, Twentieth Century Watch, under the guidance of Alan Heath.

It wasn't to last. Ted had a blow-up with Heath, leaving the magazine project in jeopardy. It's fair to say that it never recovered. Portune, Cole and Antion distanced themselves, and Ted settled down to his old dark habits. All now ancient history. A seedling of the sect in New Zealand withered quickly. Jim Bennett, who was instrumental in beginning the process of setting up CGI in the country returned from a trip to Texas disillusioned. The little group (of which I was, if I remember correctly, secretary), quickly folded.

So what happened to CGI? Ron Dart walked, Ted was finally given the order of the boot and, having snatched back his toys, started all over again with the wonderfully-named Intercontinental Church of God. CGI continued in downsized and understated mode. Today it continues to publish The International News which, unsurprisingly, began under Ted as a clone of WCG's Worldwide News.

All of which is merely a tiresomely long introduction to the current issue of the IN, now reduced to a quarterly tabloid. As someone who still has a copy of one of the early issues in his files, volume 1, number 1 no less, I have to admit to a degree of sadness. But enough of the history. Grumpy old men love to recount rambling tales from olden times, and when we get started it's best to just nod and think of today's shopping list.

This issue (Vol. 37, no. 1) is 16 pages long, overseen by Vance Stinson. It features articles by Bill Watson, Adrian Davis, Lloyd Cary, Ian Boyne, Robert Giovi and a lengthy series of obituaries. A bit like a block of cooking chocolate, solid but hardly exciting.

I was in East Texas at the time of GTA's palace rebellion. I scanned the CGI newsletter and recognized only one name: Benny Sharp. My guess that this is not the pilot Benny Sharp but someone else. I do recall the pilot was a close associate of GTA.

I think it is the destiny of all these little church fragments to fade away. There will always be a place for Armstrongism on the North American religious landscape but some organizations are too small not to fa

I'll quit while I'm ahead.

No, Near_Earth-Object, I can't imagine that they dug up an extra Benny Sharp somewhere. :) This is very likely the same Benny you (and I) remember. I can only guess maybe he didn't get along with Mark Armstrong in the way he got along with GTA, and thus either stayed with the CGI when Ted left, or went back to it after Ted died.

Actually, a lot of the chickens have come home to roost at the CGI...after Ron Dart's severe brain injury accident in April 2010 (which left him never able again to think clearly, nor to read or write), within a year or so several of the men who had left CGI to be a part of Ron's Christian Educational Ministries in the mid-to-late 1990s had wandered on back to the CGI fold. (Ron had left in 1995 immediately after the revelations about GTA's masseuse scandal, two years before the leadership of the CGI had the guts to finally shove Ted out.)

Wouldn't brain injury actually be a plus for Armstrongites?