What to do till Kingdom Come? 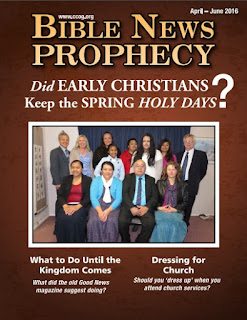 Bob's been a busy prophet, producing the latest issue of his Bible News Prophecy mag. Included in this issue.


The cover shows Bob's New Zealand following. Based in Auckland, these folk (apart from being mainly female) are predominantly made up of Pasifika members rather than Pakeha (Caucasian), which is interesting given Bob's position on BI. They seem to be frequently featured, which leads one to wonder whether this is the largest gathering of Thielians (I count nine here, excluding Bob and Joyce) the latter-day prophet can readily produce to front for a camera.

What to do till "kingdom come"? Clearly, read Bob's stuff. There's no end to that either.

The PDF is available for download.
Posted by Gavin R at 09:54


The Pasifikas can no longer have their traditional tattoos,
because Jesus' Law = Moses' Law = No Tattoos

Also the islands must synchronize Jesus' Christian Sabbath to the International Dateline because prophet Thiel, who has a hotline to heaven like Ellen White, hasn't received any new revelation/rebuke on this.

What to do until Kingdom comes?