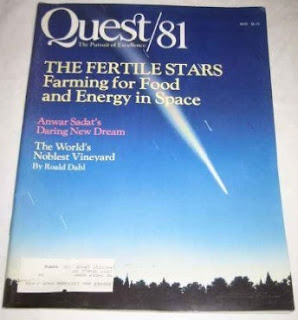 As usual there are some great postings on other blogs concerned with the Churches of God. Gary's comments on PCG's latest big-money building project (here) provoked additional comments on the Living Armstrongism blog. Could it be that Flurry is digging a financial hole he'll never be able to climb out of? Forgive me for saying so, but here's hoping!

Kevin's recent post here on AW has also ignited some debate. Lonnie Hendrix has an excellent summary of some of the early crossfire.

More on Quest/77; the 1981 walk-out of editorial staff following interference from Herb and Stan (New York Times story) involving a promo feature for Anwar Sadat's proposed vanity peace monument at the base of Mt Sinai ("Anwar Sadat's Daring New Dream").  Despite the disruption, Herb inevitably got his way. The article - written by the apostle - appeared in the May 1981 issue. Shortly thereafter the plug was pulled and Quest disappeared forever. Whatever happened to the Sadat Peace Center I wonder? ... oh, apparently it never happened.

Thanks for the mention. It is much appreciated.

When I saw that comment I just had to mention it. It was so intriguing.

It seems that David Hulme, who was once seriously involved with AICF, wants to continue in that tradition of "rarefied air" with his quarterly "Vision Magazine" , that Quest had.

Both were/are a waste of time and effort.