Old Macdonald had a farm...

The anonymous commentator at Church of God News has this to say about the Flurry college. 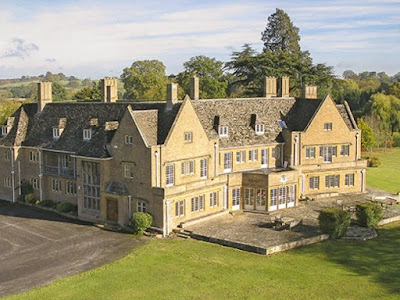 There had been no news of developments at Edstone in England since the opening of the college in January 2015, until a post in February 2016 by Brandi Davis that Edstone Welcomes Six New Residents - that’s six pregnant Suffolk sheep, not students.

“Mr. Macdonald (PCG’s Regional Director) chose this breed because they are a large breed, good for barbequing on the spit ... Mr. Macdonald also plans to add chickens to Edstone’s agricultural program in the spring.”

Brad Macdonald has a farm? Why? ... “having a small flock of sheep on the rural English campus is another way Edstone seeks to raise the ruins of the Ambassador College campuses. Ambassador’s campus in Bricket Wood, Hertfordshire, also had an agricultural program, of which Mrs. Howard’s brother (uncle of Edstone’s office manager) was head cattleman. The 1,600-acre Ambassador campus in Big Sandy, Texas, also had a large agricultural program."

Now in April there have been 3 posts by Brandi Davis.

She then reported on the record increase in response to the Key of David, which is broadcast on the CBS Reality TV channel at 8.00am on Sundays, following the Living Church of God’s ‘Tomorrow’s World’ broadcast.)

The most recent post was a day in the life of an Edstone student:

“Up at 5am ... the fitness center for a 20-minute workout ... shower ... TheTrumpet.com for morning headlines over sips of (freshly ground and brewed Ethiopian roast) coffee ... Malachi’s Message for Bible study.” (Not the final book of the Old Covenant, but God’s Revelation to Gerald Flurry.)

What is it that creates the kind of student mentality that PCG caters to? I get that most (all?) of these kids come from PCG homes. I get that many, having little hope of getting into a major college, grab the chance to get a piece of paper from the bargain aisle - affordable fees, nice facilities. even international travel. I get that there would be pressure from mummies and daddies laying it on the line about Flurry's college being their only option. And I get that the "first families" of Flurrydom are onto a very good deal indeed with kid glove treatment for those in the preferred gene pool. But these kids grow up in the same world everybody else does; reality TV, Facebook, Pandora, hormones and a drive to become independent people... How many are just playing the game by the rules set for them, biding their time?

The experience of those born into a high demand religious movement is different from those who were recruited from their late teens onward. In WCG the dropout rate of kids raised in the faith was huge. It's hard to imagine PCG is any different. One wonders what percentage of those bright-eyed young folk heading to Edmond or Edstone actually graduate with their junk degrees? And of those who endure unto the end, how many will remain in the Flurry fiefdom for the longer term?

Oh, well, never discount the power of the Stockholm syndrome.

Reminds me of a rewritten nursery rhyme that goes something like this:

"When Mary had a little lamb, the doctors were surprised!
When Old MacDonald had his farm, the doctors nearly died!"

I think that these farm projects are so important in Armstrongism because of their belief that in the Millennium, humanity will return to an agrarian society. Also, robes and sandals, marriages arranged by the parents, and other throwbacks to Biblical times.

In regards to MacDonald's farm perhaps PCG is competing against Pack's attempt to make do agriculture. Or perhaps they are just trying to imitate what was done in HWA's WCG.

It is a curious thought about what those PCG students are up to. No doubt they are not always in the information bubble. No doubt they see things that do not quite match up with what PCG's leaders say. No doubt not everyone will be able to advance in the bubble of privilege and power within PCG's 1% and will have to look elsewhere, possibly outside of the organization, to advance themselves.

It is especially inexplicable that young people would be attracted to Armstrongism now. One can surf the web for about an hour and find much to cast doubt on the bona fides of Armstrongism as a Christian denomination.

Back in the old days, there were no such information resources. Hence, HWA, et al, could perpetrate all manner of deception because they controlled information with an iron fist.

Regarding first generation young people, it's that old saying "nobody sings louder in church than a convert."

As in the WCG one of the main effects of a student body going through this faux church college process will be the development on an elite within the ranks of the PCG. Upon graduation this elite will return to their field congregations and perpetuate the ideology and culture of HQ/college worship with an almost religious zeal.

Ironically these graduates will be taught to look down on the rank and file membership as something slightly more than children, yet due to the fact that they spent their key educational years earning a college degree that literally is not worth the paper it is written on, will be individuals who are completely dependent on the church hierarchy/ruling family for their livelihoods. This will then perpetuate the whole pathetic cycle of dependency and abuse.