Do Americans use the term "cark it"? Perhaps not, in which case here's the skinny. 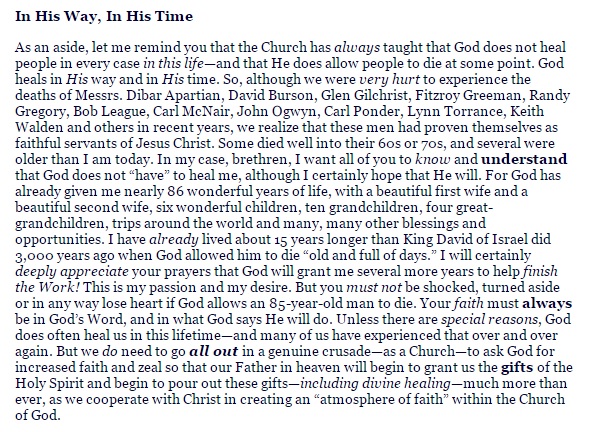 Some observations. Rod lists eleven names of the dearly departed, all blokes, all ministers. In the dim domains of Meredith's religion, there is apparently only one gender that counts, and those who pound pulpits are of superior significance. He doesn't even bother to name his significant others. 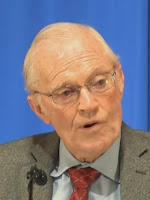 Next, Meredith assumes nobody is expecting him - God's most important representative on Planet Earth - to go the way of all flesh. It's true that there will likely be ructions and eruptions in the wake of Rod's passing, but that will hardly be unexpected. The vultures have been gathering for some time (to study the meaning of Matthew 24:28 no doubt). Younger members of LCG, in particular, have long considered Rod well past his use-by date. Sorry Rod, nobody is indispensable, most particularly those who consider themselves indispensable.

Rod is the last of the original Armstrong evangelists. He preached for decades that the World Tomorrow would dawn in his lifetime. He was wrong. Embarrassingly wrong. As was Herb. As was Ted. As were the elect eleven listed. Gotta share the news, brethren, it isn't coming anytime soon either, not in your lifetime nor mine, not anytime this side of the Sun going supernova. The magic millennium is based on a facile reading of the Good Book. It'll be a chilly day in hell when the chiliasts are proven right.

Why wait for Rod to cark it, with all the expected "after match" drama. Now is a great time to walk away.
Posted by Gavin R at 13:04

Otagosh: Can you tell us more about the "facile reading"?

God declared that false prophets shall be put to death.

Wouldn't it be nice if just one of these guys "came clean" on the way out? And, by that, I mean just admitted that they did not have the answers that they professed to have, admitted that much of what they taught was based on extrabiblical theories, numerology, misidentification of ethnicities, and the filtering of the New Covenant through the Old. That would be a good basic beginning. It would also be nice to hear an admission that at least someone felt guilty for living beyond the traditionally accepted level of opulence for a servant of God, and that, on the backs of those who were coerced to give beyond their means, at great sacrifice to their families and futures.

Such apologies seem quite reasonable and totally appropriate, but we'll never hear them. Instead, we'll hear all of the cliches about fighting the good fight, a crown being reserved in the Kingdom of Heaven, and exhortations to hold fast and to continue the work that "Mr. Armstrong" began.

Byker Bob: I think the term "come clean" implies that RM knows better. This is one of the more difficult matters to parse out with regard to anyone who believes something implicitly. I have never been able to determine, for instance, if HWA was just in it for the money or if he really believed the highly improbable and outrageous idea that he was an Apostle. If he actually believed it, then he was deceived into believing something that almost nobody else would believe about themselves or any contemporary.

I remember Rod Meredith in a sermon in the Field House in BS explaining that when Richard David Armstrong's funeral was being conducted, everyone was standing with their heads down so as not to behold the great power of god because they thought that Richard might be resurrected. At that time, early in the history of the WCG, they were not sure that a "Christian" could actually die. They thought perhaps God would sustain everyone until the return of Christ.

I think you can see from this the extent of the belief they held. Apparently, RM has held onto such beliefs that most of us would find odd. (The editor software just went crazy.) But I do believe there are people who were leaders who did know better. they are the ones who should come clean.

To Near_Earth_Object's comment, "I have never been able to determine, for instance, if HWA was just in it for the money or if he really believed the highly improbable and outrageous idea that he was an Apostle."

Many have struggled to answer this very question. For awhile, it made sense that he had been sincere until Loma passed away and then he went off track. However, further research led me to believe he was quite duplicitous much earlier on, likely from the beginning. I will share some of my findings in the future and would be curious to see if it may help you resolve this question yourself.

I believe it was first others who called him "an apostle."
He objected first in the early fifties, but vanity or self delusion are powerful forces.

His meetings with influential business people started in the early 1920's.
First a salesman 1920-30, than a journalist in 1947 UN, than an "educator"1949 (establishing of "one sent forth" college and looking for another one at Lugano)- 1965 (meeting oil sheikhs middle eastern figures).

Then 1966 - 1985) when he started to visit more "leaders or diplomats" than 99% of other world leaders (as an unofficial "one sent forth for world peacce, the term "one sent forth" falls perfectly into place, self deluded or not.

Of course certainly later on he firmly believed he was "one sent forth".

I believe he was duplicitous because he just didn't know. Most non university schooled persons learn by experiencing. When combined with a "magical" worldview one tends to shapeshift into "mythical" personalities. ( A lot of leaders do that, General Patton did, Alexander the Great did, its magical thinking)

Even if totally self-deluded, these guys, especially the ones who become "over-exuberant" about prophecy have got to at least wonder whether they have the witness of God behind them when their prophecies and timelines continually fail.

They either insulate themselves, or would also feel deep twinges of conscience as they watched bad things flow into the lives of their acolytes.

This is why it becomes so easy to think of them as being sociopathic, narcissistic, and even as double-minded atheists who preach for financial rewards things that they themselves neither believe in or fear.

Looking at them dispassionately, their net status is that of a curse, not a blessing, upon peoples' lives, despite what occasionally might pass unacted upon through their hearts or consciences. And, that is the all important takeaway.

BB always gives a lot to think about.

But I just don't think it is in the nature of the beast.

There are many people who are faced with decisions to "storm the beaches of Normandy", "close the coalmines", "chapter eleven general motors", in full knowledge that many families will be left destitute and in mourning.

Many call them "sociopathic, narcissistic, and even as double-minded atheists", and perhaps they are from a psychological perspective. I maintain that even faced with tough decisions they fully believe they are making the right decision, for whatever reason.

Timelines never bothered me much, unless you are scrumming. I believe the world is scrumming toward the world tomorrow (as made possible by cargill, exxon (if turning green), vodafone and unilever. Religions, politics and us are "God's agile scrum teams.

(I believe God works with agile scrum teams and I have neanderthal man as a prototype to prove that point.) Satan is just the old nasty employee in his comfort zone, saying "it will not work, it will not work out that way, this is incomplete")

It once was true that parallels were drawn between ACOG ministers and business persons or moguls to demonstrate that something was wrong. Corporate executives are commissioned to be dispassionate and methodical as they review figures and ratios, then make decisions so the company remains profitable, viable, and consistently able to pay out dividends to the stock holders. Often there is a human toll.

Members of the clergy, otoh, were under a different set of standards. They were to be good stewards of the resources, but more Christlike in approach to business and people, especially people.

So, basically, reducing the ministers to mogul level was generally quite an insult.

In the Middle ages, Presbyteros or Bishops of the Church were hardly distinguishable from local Barons. Even if they were under a different set of standards.

In our particular sect "The Work" equaled "The Church". As a matter of fact. It was stated that one of the main reasons for the Church to exist was to do the Work. So perhaps they were not even on par.

Of course the College was situated on and near the Summer Estates of those that helped shape Corporate America as an inspiration. The Wrigley's, The Gamble's, The Merrit's etc

Of course HWA on his death bed never urged his successor to change any doctrine, the culture, BI, or such. Official word however has, (made up by propagandist M. Feazell or not) that hwa did urge his successor to "place more emphasis on the Church".

If true, to any Corporate Strategist, this last admonition would virtually pull the rug under the existing business model until that time. The "We are family" campaign that ensued was a brave attempt but as later stated "We were still only blinding each other with our Light instead of lighting the world." This remark would signal the final death roar for the old business model centering around "The Corporation doing the work", toward winning New Market Share in an already saturated market, moving to Mega Churches centering around the prosperity Gospel.