I'm old enough to remember 1963, sort of. I was still in single digits back then and had never heard of Herbert Armstrong. It turns out that an out-of-town uncle was a PT subscriber at the time. He must have been one of the first in New Zealand. But of that I was blissfully ignorant, more interested in comics than much of anything else.

In 1963 the church put together a booklet for PT subscribers. You could call it a brag book. It was largely written by Rod Meredith and rejoiced in the title The Inside Story of the World Tomorrow Broadcast. It wasn't much of an "inside story" but it was pretty effective as PR by early nineteen sixties standards. I knew about the publication, but it had long since been withdrawn by the time I became interested. Reading it now is a bit like stepping into a time machine and peering back beyond the crises that exploded in the 1970s and defined my own experience. 1963 predates both the recently demolished Hall of Administration and the Ambassador Auditorium, the "peaceable kingdom" church seal had only just been adopted, Loma was in the land of the living and the Pasadena campus was still a comparatively small operation. 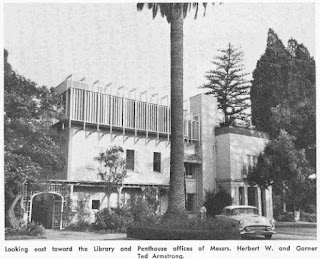 Meredith was, of course, just a young man, and Herb was at the height of his powers. The good and the great at "HQ" included such luminaries as Benjamin Rea, C. Paul Meredith (Rod's uncle), Raymond Cole, Jack Elliot, Charles Dorothy, Jon Hill, Al Portune, James Gott (husband of Beverly, Herb's daughter), Charles Hunting and Wayne Cole. Raised, praised and subsequently erased from institutional memory. The elder Meredith was always referred to as "Dr.", which looked impressive as a PT by-line, but in fact, his qualification was (I'm sure someone will correct me if I misremember) as a veterinarian.

Somebody decided that this booklet would be lavishly illustrated with photographs. Black and white of course, after all, this is 1963. There's "the majestic Italian Gardens", Ambassador Hall, the "elegant faculty dining room" and suchlike. Even a shot of some rather pokey "prayer booths". But what really caught my eye were the offices of Herb and Ted.

second vice president? and THE author of this caption!
The subtle signs of Narcissism and being powermad!