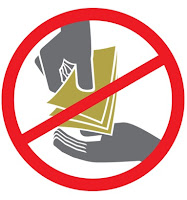 Redfox over at Living Armstrongism is reporting that the punkahwallahs at the Living Church of God have launched an exciting new website called The Bible Says That? The slogan: "What you have been taught... might not actually be in the Bible."

Well, no. The site is a potpourri of COG distinctives. Rapture (nope), hell (not yet, but watch out backsliders!), crucifixion (not on Friday). You have to tunnel down into the site to discover it's operated by LCG.

The best part of the site is this page; "Do Not Donate." Uncle Roderick doesn't want your readies.

The Bible Says That? is a repackaging effort. Pick out the core teachings and give them the 'gee whiz' treatment. It probably seemed a brilliant idea to whichever superannuated adolescent first came up with it, but the whole thing is a yawn, the equivalent of asking patsy questions then answering them yourself. Fiendishly not clever.

According to Rod "it is intended to be a topical resource that asks and answers challenging questions facing professing Christianity." LCG asks, LCG answers. Where's the fun in that?

How about a topical resource that asks challenging questions facing LCG? Then imagine a diverse range of 'answers' which people submit, compare and then weigh up for themselves as independent, thinking adults. We all know that ain't about to happen. The very thought is probably enough to send Gerald Weston running for the cooking sherry.

One final grumble; the term "professing Christianity". It crops up in most of the Armstrong sects, shorthand for "not real Christians". It's an insider term placing a boundary marker against other forms of Christianity. In short, it's an insult. Perhaps it's time to turn the tables and talk about the "professing Christianity of the LCG" (or substitute any other COG acronym). It seems eminently fair.

Meantime, the advice "do not donate" is very sensible, not just for the newbie mugs the site is trolling for, but those sincere folk who regularly tithe to Charlotte, NC. Take a tithe holiday. Buy the kids some new clothes, pay off the hire purchase, treat the grandkids, give a little to your favorite non-religious charity. It's not what LCG means, but it'd be a great way to respond to some really duplicitous marketing.

Pam wrote: "No, I don't send questions to COG groups. I have watched others try that for years and have seen pretty close to zero fruit from the efforts."

After graduating from AC I began to question the teachings of the WCG. Someone had to plant the seed of doubt in my mind. That person was Dr. Ernest Martin back around 1974. Seeds don't germinate right away. Perhaps asking questions can be the first step in someone moving away from the C of God teachings.

A better question is, "Is the Bible Forged?" and "Why should we be interested in the Bible in the first place?".

This falls outside the bounds of the Armstrongite Anti-Gospel of predictive prophecy concerning the end of the age and return of Christ - what HWA called the Great Commission. This LCG website is clearly designed to snare the unsuspecting. The ultimate goal is to recruit members and their personal and financial resources. Why the departure from the mission as HWA conceived it?

It is fascinating to imagine the fervid Armstrongite minds that are constantly trying to develop a new marketing slant in order to harvest more resources. They are not asking the question "How can we help people?", they are asking "How can we help ourselves?"

This kind of thing really should be confined to the Huckster Section of Cartwright's The Journal.

to Black Ops Mikey, and Ian if you are still reading these, what do you consider to be the best book on this topic? Glynn Washington had said that his views changed after reading "Who wrote the Bible?" years ago. I looked into picking up the book but some reviews said that many points had since been discredited. It is a good question but what book on this topic is 'unbiased'?
-Kevin

Kevin, it was Gavin who went through these topics on Otagosh.

If you want a counterpoint to all the "higher criticism", try "The Bible Tells Me So..." by Peter Enns. Enns responds to the higher criticism but develops a quite different line of reasoning. For the open mind, it is worth considering.

"Perhaps asking questions can be the first step in someone moving away from the C of God teachings."

I certainly wouldn't try to dissuade anyone from asking questions anywhere they feel might be profitable. Indeed, seeds can germinate years later. It's just been my observation that Internet COG forums are not a very profitable seed bed compared to other places and methods, in particular COG cybersettings dominated by an actual denomination.

My Field Guide website has been up for a decade, had about a million visitors, and that has been what I have found for ME is the most profitable use of my time for seed scattering. People coming to the site usually have at least a tiny bit of discomfort about some group or teacher or set of teachings... be it COG, SDA, JW, Mormon, or whatever...when they arrive. They've done a google search on some aspect of the group or teacher to get to my site usually. Once there they can stumble on seeds all over the place. :-)

Frankly, I've found that RATHER THAN trying to wean someone doctrine by doctrine away from an unhealthy group or belief system, it is more effective to help them see the bigger picture by feeding their doubts about such things as the groups' deceptive or abusive methods, authoritarianism, wild claims of being the "one and only" true group and such, proven false prophecies, and so on.

Once someone gets brave enough to consider walking away from a group because they've lost their "trust" in it, I've found they will begin questioning all the details of teachings themselves. I've received many thank you's over the years from individuals who have found my material of help to them in getting free. Or even, at times, preventing them from getting involved in a particular group in the first place.

We each have to work with whatever tools we believe are useful to accomplish a desire to help others escape foolishness. I've found my tools to be effective, so have invested time and effort in working with them.