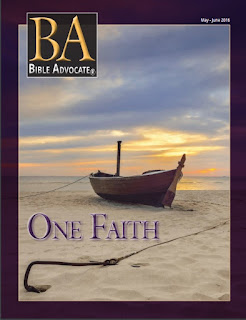 You know you've slipped into a weird parallel universe when you pick up the Bible Advocate. Weird in a mostly good way. The first sign is a feature article that mentions (and quotes) both Dietrich Bonhoeffer and Martin Luther King in a positive sense. For that reason alone Israel Steinmetz's Kingdom Loyalties (on the subject of non-violence) is a few thousand kilometres down the flight path from anything published by the Armstrong derivatives. In fact, I don't believe I've ever seen Bonhoeffer quoted in any of the COG flagship periodicals (other than BA). And how many times have you run across an approving mention of MLK in Tomorrow's World?

I looked and couldn't find a single mention of "Bible prophecy" anywhere in this issue.

What you can find is an article by Ronald Gallagher on the crucifixion/resurrection, Calvin Burrell on the new covenant, Jason Overman on faith, Caitlin Meadows on abortion issues and a number of what I guess you'd call "devotional pieces." The closest thing to the stock-in-trade rigidities we've grown to expect in Armstrongism is a piece by former editor Max Morrow called Uphold the Faith!


Some of the distinctive beliefs of the Church of God (Seventh Day), which we believe are among “the faith which was once for all delivered to the saints,” are being tested: namely, divorce and remarriage, tithing, clean and unclean meats, observance of extra-biblical holidays, and participation in military combat.

Morrow is clearly "old school", but it's interesting what he doesn't list: Bible prophecy. Bearing in mind that COG7 is an Adventist denomination that traces itself back to the early days, it seems remarkable that they're not preoccupied - perhaps obsessed is a better word - with the eschatological junk-food diet that now defines their granddaughter churches.

There's no getting around it, COG7 is a fundamentalist church and the Bible Advocate is, naturally, in that mould. But it's a different sort of fundamentalism to anything those in thrall to Roderick Meredith, David Pack, Gerry Flurry and their ilk have experienced. Dare one say it, there's a pastoral tone to the Bible Advocate, and you get the feeling that you could disagree with one or more of the writers and still be welcome.

(Next in the series, Greg Albrecht's Plain Truth)

The difference between the Bible Advocate and the COG rags is that the latter are about marketing. Prophecy sells or it used to. I have a feeling that the "Left Behind" series cut into the COGs market share. Hence, we see some of the COGs have fallen on hard times. But prophecy has always been a good marketing gambit. And if you get people really frightened and mesmerized by prophecy they will open their wallets and say "take what you want."

If you think that marketing is not the purpose, recall all the huckstering in Cartwright's Journal. Sometimes I think half the paper or more is devoted to all the little Herbert wannabes that are trying to get you to follow them and turn your wallet over to them. They know that Herbert's formula works. They know they just need to fashion the right sales pitch and they, too, can become an apostle and earn an inordinate income on the backs of poor people.

I know that Cartwright's paper is a business and must survive off of advertising revenues in part. But the Huckster Section adds a distinct flavor of sleaze to an otherwise informative paper. But on the other hand it is a garish and cheesy display of what Armstrongism is really all about for those who are able to receive it.

Max Morrow! Now there's a name I haven't heard in a long time! Back in 1978 after we left the WCG and before we got totally involved with CGI, we decided to visit the Church of God, Seventh Day in our area. We lived in Lansing, Michigan at the time, which happened to be a short drive from the tiny town of Owosso MI, the location of the CG7's national boarding high school, Springvale Academy. There was a CG7 congregation that met on the SA campus. It was pretty small in the summer time when the youth were on summer vacation, and then was beefed back up during the school year, with the students and the faculty and staff.

Max Morrow was the pastor there at the time. He must be really getting up in years by now. That was almost 40 years ago, and Max was no spring chicken even back then. Very pleasant, caring fellow. We visited the church a couple of times, along with a couple of social gatherings that were held closer to Lansing, and had Max over for a home visit once.

I felt kind of sorry for him, though. As a result of our attending, we got on their local church mailing list, and got his bi-weekly pastoral letters. The first week of the month, he would announce that the new Bible Advocates had arrived, and folks should stop by the office and get some to distribute in their personal circles of activity. I assume the idea was to put them in doctor's offices, hair salons, and so on. For of course the organization had no TV or radio outreach, no public speaking offerings (like the SDAs had with their Amazing Facts prophecy seminar series or the WCG with their America Listen campaign), and thus the only regular method they had of public evangelism was through the Advocate.

The pastoral letter in the middle of the month almost always mentioned that NO ONE had showed up yet to get any Advocates. When the next month rolled around, the story was always the same. There seemed to be pretty much zero desire for any sort of "local evangelism." Other than us, I doubt that they had had a new face from outside the denomination...a "prospective new member"...in decades. And from what I could tell, almost everybody was related to everybody else, through multiple generations.

The CG7 actually officially "started" in Michigan, in its split with the larger SDA group back in the 1800s. So we had several congregations across the state that had been around pretty much "forever." We visited two others over the years. One near the location of the original founding, in southwest Michigan, met in a tiny ramshackle old Protestant Church. Again, I'd say they hadn't seen a fresh face before our visit in decades. There were probably 20 or so people, and almost all of them looked to be in their 70s or 80s. No young families at all.

I have a hard time believing they even have anyone there at all this many years later. As I understand it, there are a few growing CG7 congregations in the US, with younger and enthusiastic pastors trying to breathe life into the denomination. But I think these aging, shrinking groups are likely more typical. On the other hand, as with MANY denominations including the SDAs and Jehovah's Witnesses, there is much more zealous evangelizing going on in third world countries.

B.A. Bad Acronym. Haven't these people ever heard of "hanging a B.A." or of B.A. Baracas? I think this is one case where the full five syllables would serve them better than cutting down to two.

Have to admit it, Bob, I'd heard of neither. Had to google it. Perhaps not so common outside North America... or maybe I'm just outa the loop.

Sorry, Gavin. But, the cool thing is that we are receiving cross-cultural education amongst ourselves here. Carking it. Hanging a BA. Who knew?

It's fun. I recently met a lady from Bulgaria, and we had a discussion about the value of Russian classic cars here in the USA, like the '66 Volga I recently saw in the classifieds. She shared that if you drove a car like that in her country, people would laugh at you. Apparently, there are numerous specimens just setting around over there, and nobody is doing anything with them.

Interesting to learn some of the things that factor into the lives of people around the world.

Many of the COG 7 groups in the United States are now Spanish speaking. It is reasonable to say that virtually all the growth of the church has been because of immigration.

I've worshipped with a number of COG 7th Day congregations around the country, and the ambiance is definitely more Christian and the ministry more pastoral than anything I've ever experienced in an ACOG, including CGI. They are also much more tolerant of a wide range of opinions. On the whole, I'd have to say that they are head and shoulders above anything the ACOGs have to offer. And, when all the results are in, I bet they will have lasted much longer than any of the ACOGs. Still, they are Fundamentalist, many of them are legalistic and most of their congregations are aging (not a good outlook for the future).

Still with over 300,000 people, the Church of God Seventh Day is the winner among the CoGs. The combined ACoGs are about 10% of the number represented by the CG7.

However, I think that a big 'BA' on the cover in the upper left hand corner is a very bad symbol. Someone had put us down for a subscription and I got this magazine in the mail. The first thing I thought was "Why is the Bank of America sending me a magazine -- I haven't banked with them for years?"

Businesses and particularly churches need to be careful about their logos and branding.

Otherwise, the CG7 is actually what the ACoGs should be, particularly since that's where the ACoGs came from in the first place. Aggressive marketing tactics really don't matter much if you are attempting to help lead people to redemption and salvation, and particularly if your message is based on a thoroughly debunked British Israelism -- the key to being a prophetic failure as a false prophet. The CG7 stopped with all the prophetic nonsense somewhere between the 1950's and 1970's (no doubt helped along by 1975 in Prophecy.

It's amazing how the Cult of Herbert Armstrong Mafia completely ignore the larger world including the CG7 as if they were the only ones in the world who existed and even mattered, when they really don't.

I haven't read the Bible Advocate in years! I remember citing it in a debate about two decades ago, and my skeptical liberal opponents mocked me over that. That was back when I was a fundamentalist.