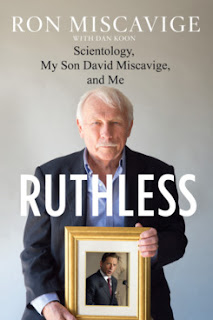 The elder Miscavige is a longtime Scientologist who introduced the religion to his kids. Now in his late seventies, he and his current wife have left his son's toxic dominion behind them and moved back into the real world. Sort of.

It's quite a story involving private investigators, manipulation, abuse and "disconnection" - the Scientology term for being marked and disfellowshipped. What struck me most in his account, however, is how he still clings, to some degree, to the image he bought into all those years ago. He's willing to see the negative side of Hubbard as a person, and he's brutally honest about how he sees David's leadership as an entirely negative, oppressive force. And yet he sincerely believes that Scientology - at least in the early days - had a lot to offer. With apologies to Ian Boyne, he seems to advocate a "Reformed Hubbardism".

If you're going to make a huge change in your world view, best to do it when you're young. The older we get, the more likely we are to throw in a truckload of "yes, but" statements. It's painful to cut our moorings completely. Cognitive dissonance is not kind to us in the later decades of our lives.

Miscavige tells an important story bravely. He's a regular kind of guy, not overloaded with subtlety in his views or his approach to life. There's no doubt he's recounting things as he sees them and with honesty and integrity. If you get the chance, Ruthless is well worth investing some time to read.

The parallels with many who have left various branches of COGdom behind them is hard to miss. They want to pick and choose from the flotsam and jetsam of their former affiliation. Herbert Armstrong may have been a deeply flawed man, but... Some parts of British Israelism may have been a bit off, but... The church went too far in some areas, but...

I'm glad Ron and his wife have escaped from the Scientologist gulag, but it's not always true - as Rodney Lain maintained back in the early days of WCG Internet resistance - that if you "free your mind, your behind will follow." Some of us want to find a comfortable compromise that allows us to save face, admitting that we were wrong, but not entirely wrong. Miscavige's book illustrates just that point.

USING THE "YEAH BUT" DEFENSE...

Hitler and the Nazis were Satanically Evil and Hideous, YEAH BUT...

* The Trains ran on time

* The people had jobs

* They restored order and got rid of the communists.

* They had really good documentaries and great looking uniforms.

* Beer and Bratwurst distribution was improved.

It seems self-obvious that we as humans collect and correct a bank of knowledge and beliefs as we travel through life. New incoming knowledge is most often evaluated based on what is already there. To one extent or another, the degree of tenacity varies with regard to favoring the old over the new. There is also an inner struggle between emotion and logic. Both seem to be appealed to and utilized in selling organized systems such as Armstrongism and Scientology, and in retaining members. Once part of the personal bank of knowledge, much of what is embedded becomes very difficult to shed, even if one's experience in the group was extremely unpleasant.

A most perceptive analysis, though part of the residual cognitive dissonance in the book is likely due to Ron Sr.'s co-author, Dan Koon, who counts himself as an 'Indie' Scientologist: the sort who still (heaven knows why) thinks it worthwhile to cherry-pick through Hubbard's heap of dust and broken bottles. I suspect those bits of the text that seek to justify the ways of L Ron to man are Koon's responsibility alone - though of course Ron would have had final approval on what went in. If Koon is still stuck looking back to a largely imaginary golden age of Scientology - just as a lot of ex-COGers think the sun once shone out of HWA's bottom - Ron strikes me as only part way through his journey out of this pernicious scam.

When I was working at AC Big Sandy, I saw some incredible stuff. I also heard stuff from faculty members that would blow the socks off the typical lay member. The idea of "God's College" might have required revisiting for many.

But I always in my mind separated the behavior of some from the institution itself. For me AC was the beginning of a dream that there could be right and excellent education. There were bad actors, but human nature being what it is, perfection would have to wait for the Millenium. I did not understand that the whole system was corrupt, that AC was not progressing to a breathtaking outcome, until I realized the underlying theology was in great and grave error. The tree was poisonous and its fruit could not possibly be good no matter how long and how much effort.
AC was a failed experiment.