It's the PT Jim, but not as we know it 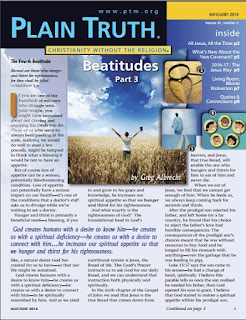 The May/June issue of The Plain Truth is out.

The Plain Truth? Is that still a thing?

We're talking about the 8-page newsletter produced by Greg Albrecht, the man behind the slogan "Christianity without the religion". As if that could possibly be a thing.

Page 1: Greg on the fourth (and fifth and sixth) beatitudes.


"Christ-followers believe that God became a man, and that God is One and yet at the same time, He is Three—Father Son and Holy Spirit. That doesn’t make sense! You want something that makes sense?"

Well, yes actually. Or is it a case of "Blessed are the incoherent". And blessed are those who have no idea beyond romanticized mush about the historical development of the Trinity doctrine.

Greg's argument - if it can be dignified with that term - is reflected in his title: "Grace is Senseless, Irrational and Absurd." Really? Does Greg feel this way about every act of unearned kindness? Does compassion make no sense in Greg's life? A decent theologian might assert that grace is surprising, unexpected and undeserved, but that's not the same thing. You can certainly say that it runs contrary to the wisdom of the everyday dog-eat-dog world; but again, that's not the same thing either. At best you could say that grace seems at times to be irrational to certain people.

But to move from overblown polemic about the imagined and arbitrary qualities of grace to a semi-mystical dogma about the necessary incoherence of the Trinity? That's, well, "senseless, irrational and absurd."

Perhaps the most interesting item is an ad for an upcoming novel by Monte; The Remnant. Monte is described as an "award-winning author", though the ad doesn't specify which book or which award. Wolverton is an insightful guy and - keeping a family tradition alive - a fantastic political cartoonist. You can't help wonder why he still hangs out with Albrecht in his tin-pot ministry. I guess he has his reasons.

The PDF is available to download.
Posted by Gavin R at 20:11

The primary proof of the Trinity has always been that it is so precisely because it makes no sense. Of course it all made up theological BS because once you introduce the idea that a God sent his son which was really himself to die and then the God that died was resurrected by himself in the guise of his father by the power of himself which is another person but not really, and then the son god returns to the father god to sit on his own right hand and there is no mom around, well....there ya go!

Also, the reason God can't get anything done is precisely because he is sitting on his own right hand....

I hope that AW will review MAD MAGAZINE... a publication with more religious truth than most of those featured so far on here!

It is a watershed that the PT is talking about grace at all. The way it is couched in language may emphasize too much certain dimensions of grace but consider that the COGs, if they follow Armstronism, have only a tiny, anemic doctrine of grace.

Grace is one of the principal characteristics that distinguishes Christianity from other religions. But if you look in "The Mystery of the Ages" by HWA you will find hardly anything about grace. You will find a short rant by Herbert on the evils of what is known as "cheap grace." In fact, grace is The Mystery of the Ages and most of the other heretical destiny-of-man, prophetic and governmental stuff that HWA wrote about is secondary and tertiary.

The reason why grace is carefully avoided by the COGs is that it is an effective counter to fear - the Armstrongite ministry's main tool of control. The COGs want a big, mean, graceless god that they can invoke to instill fear in order to fleece the flock of its material resources. (The ancient Carthaginian priests used the same technique to persuade people to sacrifice their children.) Under those circumstances, grace is a concept that has to be aggressively contained. Instead, the COGs actively promote the idea that the Armstrongite lay membership consists of transgressors before a fierce and wrathful god. And the transgressors need to buy their way out of this situation by tithes, offerings and regulation keeping. Christ and grace play little role in this diabolical calculus.

"The primary proof of the Trinity has always been that it is so precisely because it makes no sense."

It is really clear that you were trained at Ambassador College.

"I hope that AW will review MAD MAGAZINE... a publication with more religious truth than most of those featured so far on here!"

AND a publication that had its own Basil Wolverton art at the exact same time Basil was illustrating the End Times for the Radio Church of God's literature! (And the old Spokesman's Club manual...)

He was, of course, already a well-known artist for horror and sci-fi mags clear back in the 1930s and 40s before he got involved with (and was ordained by) the Radio Church of God...and with MAD Magazine.

Two decades and more after his death in 1978 MAD continued to feature some of his artwork, including on their inside back cover in sales pitches for magazine subscriptions!

You can see my homage to Basil's "Dual Career" in a little mini-biography of his work on my Prophecy Panic Button blog, linked below. LOTS o' cool pics!

Blessed are the pacemakers, for they keep the heart beating.

...and i grew up Presbyterian soaking in grace n inexplicable explanations of the trinity, so keep you attemps at childish and shallow insult to yourself

I may not be getting the author's meaning but I think he's saying grace makes no sense and is absurd TO THOSE PERSONS who think in terms of pleasing God by obeying laws and measuring up according to religious standards. To such persons the OT law system makes sense but NT grace doesn't. Here is why I think that is what he is saying: "God’s grace (and the gospel which announces God’s grace) is ludicrous and absurd-—it’s senseless and irrational TO THOSE WHO DEFINE, EXPERIENCE AND KNOW GOD IN RELIGIOUS TERMS" (emphasis mine). I think when he says "in religious terms" he's talking about a system of religious works, etc. But I could be misunderstanding him. (J. Parks)

This is another example as to why there is personal responsibility involved in coming to all of our beliefs. It is all subject to interpretation, much like Shakespeare, or any fine literary work. I've never yet met a human who has the total picture, and in the ACOGs, they try to enforce the "understanding" with authority. That thwarts and distorts the process as opposed to providing any real spiritual guidance.

The Jews seem to believe that the entire concept of God is so infinite and complex, that humans cannot fully understand. That idea would seem to be well-validated by those who claim to be mystified and confused by the trinity.


I wonder who's Dumber: HWA, Tkach or Albrecht?

Tkach is pretty Dumb, flip-flopping from HWAism to Orthodoxy (wrong on both counts)

"Grace is one of the principal characteristics that distinguishes Christianity from other religions."

Not according to the "new perspective on Paul" theologians. They claim first-century Judaism affirmed a "grace alone" teaching, and that Paul (in Galatians, for example) confronted Jews who boasted of "works," not as a means of establishing a right relationship with God, but to SHOW they were the elect, or chosen people. Therefore, if a non-Jew wanted to be a part of the elect body, he had to become a Jew by adoption---hence the emphasis on circumcision. Paul's argument was that grace had come to the uncircumcised and already made them members of the elect body, which was made up of Jews, Greeks, etc.