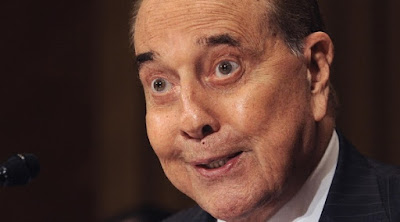 I'm not sure what to make of this recently posted comment.


Thanks to Senator Bob Dole ordering the preservation of GTA's tapes into the national archives of the United States TV division of the Library of Congress - (HWA's broadcast tapes of the World Tomorrow from 1978 to '86, were never ordered preserved by Dole, but were included miraculously by God, as a clerical "error" by a library staffer) - THE WORLD TOMORROW will once again ring out around the world over TV, radio and Internet social media websites, hosted posthumously and jointly be the tandem father and son duo of Herbert W. Armstrong and Garner Ted Armstrong. We needed to have a PROGRAM TO DO AN ENDTIME WORK OF WITNESS AND WARNING, and GOD our father along with His son, Jesus Christ put it into the mind of a POWERFUL UNITED STATES SENATOR TO PRESERVE THE ORIGINAL MASTER BROADCAST TAPES OF THE WORLD TOMORROW!!

Somehow I think the anonymous sender (why are they always anonymous?) might be the same guy who sent these comments earlier to the One Accord thread.


...you [refering to a previous comment] have no independent verification of the rumor the Timmons used blackmail leverage on Joe Jr to obtain the World Tomorrow rights, because you are the one who started to [sic] false gossip rumor right here at this blog in your precious post. The fact, the truth is Shirley Timmons was a caregiver, a private nurse aid, to Shirley Tkach, SR's wife when she was ailing. Shirley Timmons called Joe Jr to inquire about the broadcast name and rights shortly after they split from ICG following GTA's death. Joe Jr fondly remembered Shirley and Earl from his childhood and their personal friendship with his parents and the great loving care Mrs. Timmons provided to his mom. So, Joe Jr. instructed Ralph Helge assist the Timmons with the acquisition copyright and trademark right for TWT for FREE. Previously it had been up for sale like most of the assets, asking price $300 THOUSAND. The only offer came from David Hulme, who offered Joe Jr $100 THOUSAND for the rights after Hulme left UCG. Junior turned down the Hulme $100K offer. God miraculously blessed the Timmons with the rights, for FREE!