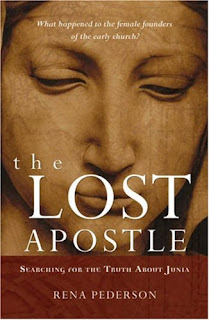 Compulsory reading over at Gary's Banned blog. It seems the lads gathered back in March to discuss whether women should be allowed to write substantive articles for church publications. The fact that there's any doubt on the matter is a real indictment. Gary hits the nail firmly on the head when he uses the "p-word", patriarchy.

The lads apparently haven't taken on board the evidence that a woman, Junia, is listed as an apostle in Romans 16:7 (for a fascinating discussion of this passage, how it has been misrepresented in many modern translations, and the implications, you could do worse than to hunt down a copy of Rena Pederson's The Lost Apostle: Searching for the Truth About Junia).

Not that we expect UCG to ordain women any time soon, or allow them speaking rights in worship services, more's the pity. To be fair, it might not be that the lads on the media committee are entirely averse to greater participation by women in writing and editorial content (though their hand-wringing hardly sounds enthusiastic!), but apparently there are grumblings from the Luddite fringe at the very prospect. It seems they didn't all pack their bags and migrate to COGWA. UCG seems to have simply continued muddling along the path of least resistance on this issue as if it's 1956, not 2016. The current unofficial policy seems to be that women can write an occasional bit of reflective fluff, but when it comes to important stuff (reader alert: another "p-word" follows) a penis is definitely required

Great to see Beverly Kubik speaking up on this issue.


Beverly Kubik asked if there was a well done study paper on the verses brought up today about women not speaking at church, because if you take these verses literally then women have to put gags in their mouth when they enter the building. She asked if there was a study paper and said we should have that when addressing this topic. Robin Webber agreed that there are many commentaries on this, and they could be put together. Mrs. Kubik said she would like to see an unbiased study into those scriptures.

She went on to comment that we encourage discussion of the sermon after service and, if we take those verses literally then women can’t talk about the sermon after services. She didn’t feel that interpretation of those verses make sense with the context of rest of the entire Bible. When Christ came He showed more respect to women than had been in the culture prior to that. She asked why that was. She asked why some women are called “prominent women.” Why were they prominent, and what were they doing in the churches there? She feels we are so fearful of anything that comes near preaching for women, yet we have no problem with women singing scriptural words. She would like to understand why these lines are being drawn, and she wants to know what is right or isn’t right. She isn’t trying to promote any idea over another.

The full COE report is online.
Posted by Gavin R at 12:55

Excellent, Mrs. Kubik. I hope UCG will really think about these questions.

The core of the problem is that all the Armstrongist churches are sects of a cult.

Not only shouldn't the women bother with writing or speaking for the dysfunctional group, no one should.

To maintain any semblance of sanity, the quickest route to a solution is to pack up and permanently leave the entire venue, at which point, the entire question becomes totally irrelevant.

"The lads apparently haven't taken on board the evidence that a woman, Junia, is listed as an apostle in Romans 16:7 "


boy that's a stretch!...it says they were of note among the apostles, meaning the apostles knew of them, probably because of their unwavering faith.

The ability to post anonymously has been withdrawn for the time being. Sorry for the inconvenience. Normal service may be resumed later. All you need for now is a Google account or one of the other accounts listed below.

To the final anonymous commenter... Not so much of a stretch if you care to read beyond the translation and take on board the discussion in Pederson's book. But hey, you have a perfect right to a kneejerk reaction.

I salute Beverly Kubik for having the guts to speak up!

Great move, no more hiding light under the basket. negative , positive comments will have a name.