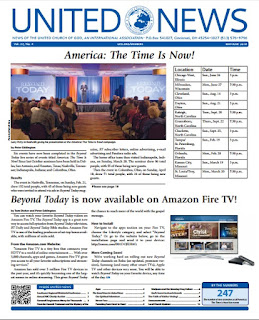 The United Church of God is enjoying a "breather" from the disruptions and discord that have characterised its development thus far. At least, that's what Vic Kubik seems to be saying in the May-June issue of United News.


"We value the current period of peace in the Church and need to constantly remind ourselves it is only in this environment we can have the growth and forward movement we all desire."

Growth, one suspects, needs more than peace in the ranks (though that certainly helps). It requires engagement with the issues that concern an up and coming generation. Forward movement requires the ditching of reactionary thinking. UCG isn't doing so well there. Beyond Today is becoming an increasingly shrill right-wing publication fixated on discredited prophetic speculation. The same might be said for the approach behind the spectacularly unproductive America: The Time Is Now! tour. No future in that.

For those who might miss the Good News moniker and logo, it has been absorbed into the UN as a section heading.

Included in this issue is an obituary for former WCG South African Regional Director Bob Fahey.

It's interesting to compare UN with its LCG opposite number, Living Church News. UN seems the more balanced of the two, containing more actual 'news' and not talking down - perhaps it's better to say talking down less - to the membership than its counterpart. It's notable that Meredith dominates LCN pages, whereas there is no real cult of personality apparent in the UCG publication. Credit where credit is due.

Email ThisBlogThis!Share to TwitterShare to FacebookShare to Pinterest
Labels: Beyond Today, Magazines, UCG

This is the first COG-MAG in your series that I have actually looked at. I immediately bumped into an article by Rex Sexton. I knew him a BS and have nothing but negative recollections of him. I quickly discontinued my look at the magazine.

It is an odd phenomenon but most of the people who read Armstrongite literature have no idea what personality is wielding the pen. Most people who were avid followers of HWA never met HWA. It is the nature of the kind of communications used by Armstrongites. Most people never get up close and personal with these leaders. The lay membership is a victim of distance learning and distance indoctrination. I think most lay members would have found HWA to be quit different than what they thought he was. He decidedly was not a kindly, gentle and wise old man.

And if you know some of these people, these cult leaders, it entirely changes your view on what they say and write.

Perhaps it's just that everybody in the cult is worn out.

Wait awhile for people to get a second wind, then see if contention continues.

Or maybe the UCG has reached the entropy limit at which point no more splits are possible.

One of the consequences of years in Armstrongism can be the incapability of having other than superficial relationships. They played Yankees and Rebels with our families, declaring family members outside of the church to be people to be held at arms length. People were implied to be expendable, considering the legalistic "my way or the highway" approach. Love was always conditional, making other church members the substitute friends, and substitute family.

This is probably why we have witnessed the Balkanization of Armstrongism once the iron fisted one carked it.

Any reports on the "spectacularly unproductive America: The Time Is Now! tour"? I don't doubt it was a massive waste of money and time, but I'd be curious as to the extent.

I meant to write that I knew Rex Sexton "at" BS (Big Sandy). The circumstances are enough to make me highly suspicious of UCG. Who rises to the top of an organization can tell you much about the organization.

NEO -- at the very least you could say he's colorful.

Now if we were to look at the UCG as a midsized corporation, it is fairly certain that we could expect psychopaths and sociopaths to rise to the top of the organization.

Of course, we can't be certain that United operates as a midsized corporation as in "Moral Mazes" by Robert Jackall and "The Corporation" (book and video), but the dynamics do seem to fit well.

but every time that I see the term "UNITED" used in the COG sense, I think of Undie-Ted , ala Garner Ted Armstrong!

I was sorry to hear about Bob Fahey's passing. He was my local minister for a few years back in the early 80's. He and his wife were kind and genuine to me and gave me a lot of support when I was going through some hefty problems.