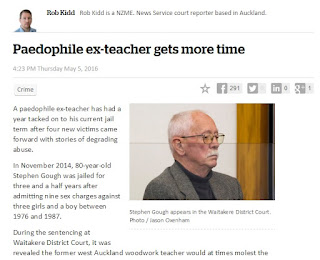 It's in the news again.

He played special music on many a Sabbath. It was memorable in that he was a bit of a showman when it came to the piano. The performances at WCG services in Auckland always had a touch of the dramatic. And he was undeniably talented. In a congregation of 300 or more souls, this guy stood out. At the time I admired his style, little knowing the darkness beyond the facade.

Or was it a facade? How does someone live by two utterly discordant sets of values, one focused on the trappings of biblical Christianity, the other on the gratification of one's own desires at the expense of vulnerable children? Was the church profile just a cover, or was this man both deeply committed and hugely conflicted at the same time?

What isn't in doubt is the horrific damage he caused.

It could have happened in any church. Sadly, it often does. But that it happened in the church we - many of us - naively regarded as God's True Church, has a special poignancy.

Today churches have stringent procedures in place dealing with abuse. At least, mainline churches do. Perhaps someone can enlighten us as to whether the same is true in any of the bodies that have descended from WCG. This man was involved in at least one of these splinters (Fred Coulter's CBCG) - actually representing it in New Zealand until his past caught up with him.

Are they safe places for kids now? Have they ensured that the welfare of the young people is paramount?

(The earlier story on Otagosh, is available here.)

The court system should probably throw away the key on this one. Pedophiles aren't just people who fail to control their sexual urges. The rapist pathology is also very much a part of their illicit activities. There is a disease involving the filters and innate restraints within their minds.

Anyone within Christianity who believes that offenses such as this can be properly handled by "first confront your brother" is seriously misguided.

What ghastly things this so and so has done. Just awful. Thank you for telling us of this matter.

Why does pedophilia seem to be a problem for so many people in leadership positions within the "Christian" community? Is it a control thing? Does it stem from a feeling of entitlement?

From the title of the news article about this evil man...

I wish this was just a complete aberration in the COG world (and everywhere else.) Unfortunately it is not. Example:

Last July, former CGI minister (and former WCG) John Pinkston, age 78, was sentenced to ten years in jail and ten more years probation for molesting two little girls from his small congregation in recent times. (This wasn't one of those "back in the '80s" kind of situations.) One of them said an incident happened while he was alone with her in a church room as she watched a children's Bible video. In a backhanded confession to the police he brushed it off as "a stupid mistake" and that it lasted "only 15 seconds."

Pinkston had left the CGI years before and started his own miniscule version of the Great Work of God in Kennesaw, Georgia, that he named the "Congregation of God Seventh Day." He wrote booklets on prophecy, and had a radio and tv program called "Watch America."

The Banned by HWA blog covered the story last year at this link.

I had followed the early part of this saga in 2014 in the Georgia news. I live in Savannah, Georgia, about four hours away from Kennesaw.

But it looked like the charges weren't going to go anywhere! I thought they had been dropped because there was no corroborating evidence to pin the charges on him other than the testimony of the two children.

But in a surprise conclusion to the situation, it went to trial and the jury took less than two hours to convict him.

I had always found Pinkston to be an arrogant, boring jerk, during our days in the CGI (where he was a pastor in Georgia during the same time my husband George pastored a CGI group in Michigan.) We heard him preach at the CGI FOT a number of times. I remember one time clearly, in about 1985, when the whole point of his sermon was that he was PROUD to be identified by the world as an "Armstrongite" and we should all be too. (I disagreed with him vehemently even back then when I was still in the org...) Guess he changed his mind on that later.

I could NEVER figure out over the subsequent years why so many people, such as some on the COG Internet forums I participated on in the 1990s, would pass along his articles and tapes from his ministry with glowing enthusiasm. I was glad to hear that he wasn't able to talk his way out of this situation. Even the judge said it was despicable the way Pinkston tried to "manipulate" the jury with nonsense.

And in the Seattle area, I found to my horror from a leading lady in the church at the Night to Be Much Observed that the elder teaching my son Y.O.U. lessons on the Sabbath was a pedophile.

She told me that she and a number of other leading women in the church had gone to the minister. Heck, they'd gone all the way to headquarters. But in the style of the Cult of Herbert Armstrong Mafia, the church did absolutely nothing.

And so, they did what they could and "watched" him in church, particularly on the holydays.

It isn't so much that the CoHAM attracts these sorts of people, along with psychopaths who find the environment conducive to their "games", it's that Armstrongist leaders not only tolerate, but in some cases, encourage the behavior. Witness the case of stalkers in the WCG / UCG which were quite weird and creepy. In one case, a man actually tried to put a woman in the church on a life insurance policy and told the insurance company that they were to be married (fat chance of that).

For some these discussions are academic, but for those of us who have experienced some of the worst bad behavior of Armstrongism, it's visceral.

It isn't going to stop until everyone admits that Armstrongism is a cult and requires accountability from the leadership. Of course, that's quite impossible, so the next best thing is to continue to expose the outrages and hope that the cult will eventually go out of business.

Of course, it's doubtful that we'll ever see reports of this sort of thing in The Journal.