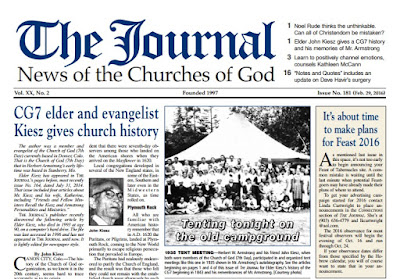 The latest issue of The Journal is now out, dated February 29. One of the most prominent articles features a previously unpublished account by the late John Kiesz of the early days of the Adventist movement and the formation of Sabbatarian churches. Included are his recollections of Herbert Armstrong's early ministry.


I well remember the time when Herbert apparently was as much against worldly pleasures as I was: such as attendance at the movies, dancing, drinking. card-playing, and the wearing of excessive jewelry... but now all these things are permitted in his groups.


I knew him as a humble man. But things have changed over the years. He grew too big for his own or anyone else's good, as far as spirituality is concerned.

The majority of his adherents have been thoroughly brainwashed, and there is nothing anyone can do for them anymore, as far as directing them into the right channels is concerned.

Kiesz, an elder in CoG7 in the 1930s, passed away in 1993. It's quite a fascinating look at COG history from a different perspective.

Also featuring in this issue is an article by Noel Rude that's sure to set the feline among the avians. Rude asks "can the virgin birth be the mother of all heresies?"


The road to the Trinity began with the virgin birth. Preexistence and incarnation followed. The virgin birth was... the mother of all Christological heresy.

Rude cites sources like Rudolf Bultmann and Helmet Koester along with a variety of ancient sources. The position he advocates is an adoptionist one; that "Jesus became a son of God, not by Eternal Generation and not by a virgin birth. Rather, his sonship was declared by a resurrection of the dead..."

Which, I think you'll agree, should generate (though not perhaps eternally generate) a lot of comment.

There's more of course. Editor Dixon Cartwright even includes a short item in the 'Notes & Quotes' section about the reappearance of AW.

The issue can, as always, be accessed in PDF format. A number of recent back issues can also be accessed from the sidebar, and more will be added as time permits.

I knew Noel Rude when he was a young man in the Radio Church of God and his stories about how he visited Castro's Cuba and the adventures he had there -- something of a maverick who spent days on the Cuban beaches. As for his opinion that the Virgin Birth is the mother of all heresies, it should be noted that the illustrious editor came firmly down absolutely standing on both sides of the idea. Is it true? Maybe. Maybe not. Could be either way. It's a window into the insanity of Armstrongism. Well, when you're pretty sure the Bible isn't really God's Word, how could it be any other way?

As for John Kiesz being representative of CoG7D opinion (especially about Herbert Armstrong), forget it. I suspect that Robert Coulter in "The Journey" portrays a more objective view. It is doubtful that Herbert Armstrong was a humble man and Mr. Kiesz was probably blinded to Armstrong's narcissism. As for alcohol for the Lord's Supper, Herb was an alcoholic, so what would you expect. He certainly made the WCG quite the comfortable place for boozing alcoholics. "I well remember the time when Herbert apparently was as much against worldly pleasures as I was: such as attendance at the movies, dancing, drinking, card-playing, and the wearing of excessive jewelry." apparently is the operative word here.

Once again, "The Journal" seems to have far more crazy advertising than articles. It was a nice touch, though, that it mentioned this blog.

It's encouraging that Dixon has published the John Kiesz interview. This has been used mostly on so-called "dissident" sites in the past for obvious reasons.

To Douglas: I guess I came down firmly on both sides of the VB idea. But I really am neutral on this and quite a few other doctrines. I don't care, and I don't think God cares, whether we believe in the VB or not or in sundry other doctrines or not. Is the VB true? Is it false? Maybe it's neither, rather just a matter of opinion. So my neutral approach is insanity?

Speaking of Robert Coulter, we did publish extensive comments from him fairly recently. After I listened to his original discourse in Big Sandy years ago, I followed up with a phone call to ask him what happens to babies who don't hear the name Jesus before they die. Did he believe in something like the HWA 2nd-resurrection doctrine? Mr. Coulter told me such babies would be resurrected, judged and "annihilated":