Learning to be ruled 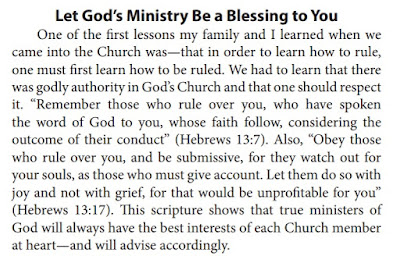 Deference to the ministry is one of the unofficial doctrines of most Church of God groups. Do you, humble layperson that you are, have a question? Fear not, your minister can make a ruling. If he does, it would be a very bad idea to ignore it. Stories were told, apparently quite true, of members consulting the great man on what colour their new car should (or shouldn't) be. This must have been frustrating for WCG clergy too, often being sidelined after services by an insecure member trying to get advice when the minister just wanted to get some personal distance from the herd.

Some of us were worldly-wise enough to know that what the minister didn't know wouldn't hurt him. Or more to the point, us. It was one thing to listen respectfully (I'm not sure we even thought about listening critically) to a sermon and take the message on board, quite another to give the gentleman in the expensive suit carte blanche to micro-manage our lives.

Behind all this was another message. We were being trained. Training in obedience was conceived in terms not greatly different from dog training. In turn, parents were expected to train their kids in the same way, following the principles enunciated by that genius in child psychology, Garner Ted Armstrong. ("Any and every child needs spankings. It is a vital, integral part of his positive teaching and training.")

But isn't this all something long left behind in the 1970s? Well, apparently not in Rod Meredith's LCG. Faye League, wife of the late LCG pastor Bob ("the enforcer") League, shares some grandmotherly wisdom in the current issue of Living Church News. Alas, the experience many of us have had indicates that "true ministers of God" (Faye means LCG elders) do not always "have the best interests of each Church member at heart". Some of them may wish to, but at best that's just a good intention. Others certainly don't. Think David C. Pack who joined Rod before setting up his own franchise. When Big Dave was still holding hands with his best buddy Rod did he have the best interests of each Church member at heart? Does he now? Not exactly rocket science is it.

Then there's the undeniable reality that ministerial advice over the years has often been woeful. In many cases, you'd be better served by flipping a coin.

Being an autonomous human being means taking responsibility for your own decisions. Autonomy was almost always discouraged in the Churches of God. What the pastor said from the pulpit was not to be questioned. Even if you raised your eyes to the great one to express agreement with something he'd said, you could be pulled up for having the temerity to express an opinion - even a positive one - on his gracious words. That was simply not your place. That's how authoritarian structures work.

What about those texts Faye quotes in Hebrews? Notice the words "considering the outcome of their conduct." The writer of Hebrews presumes that a minister's conduct will have a positive outcome, but we know better when it comes to many COG ministers, beginning with Herbert Armstrong and stretching all the way down the line, past Bob League and into to the present. 'Consider' implies weighing up, judging, evaluating, a concept that should send a shiver up the spine of many a COG minister.

It's worth noting that the League article is particularly addressed to women in the church. A stroppy man is bad enough in authoritarian sects, but a stroppy woman is apparently much worse. Perhaps the 'little ladies' of LCG needed a particular reminder.

Apropos that this would come from someone connected to a man nicknamed "the enforcer."

There's a guy out there who's been running a campaign for a number of years now explaining why, out on the streets you should never talk to a policeman, and the reason why is because there's nothing good than can come of it, only bad. Within reason, I think the logic behind this advice is hard to entirely dispute.

Which is why, back in the day, "counseling" with a minister, about anything really, was the furthest thing from my mind. It's like counseling with the police. Not to say there were some who were more humane than others, but by and large, underneath the velvet glove, a minister's job was one of enforcement. Why would anyone think it was a good idea to counsel with the cops? I can't imagine. I never wanted to ask for trouble that badly.

Both cops and the ministers were so suspicious that they would question an individual's motives for attempting to insert himself into situations, in an effort to get close. That is suspicious in and of itself.

It is so unfortunate, but completely predictable, that LCG members are being told to submit themselves like that.