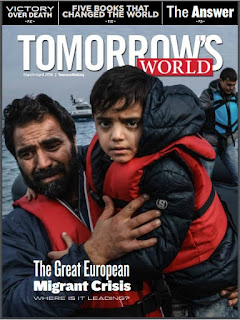 After yesterday's look through the latest Beyond Today, what can be said about the March/April issue of it's leading competition, LCG's Tomorrow's World?

On the surface, it looks like a news magazine, which is a different strategy from the slightly New Age mountaintop sunrise on the cover of Beyond Today. If it's news journalism you're expecting, though, you're bound to be disappointed.

Rod Meredith editorialises about "Make Each Day Count!" Carpe diem huh? How so? Rod exhorts us:


"We in this Work of the living God hope and pray that all of you will truly “check up” on us. We sincerely want you to prove what you believe and why. Do not believe what I am telling you just because I am telling it to you. Check it out in your own Bible."

Where have we heard that before? "Check up" means read the carefully curated proof texts all the way up the garden path.

Rod also has a long article called "The Answer." Eight rambling pages salted with the usual pitch for BI.


'Truly, the spoiled and arrogant descendants of the so-called “Lost Ten Tribes” of Israel are today found among the American and British-descended peoples, and the peace-loving nations of northwestern Europe.'

Germanic folk should ignore that, sorry.

Adam West (probably not the much-loved Batman actor) in an article about "The Year of Shakespeare" seems to be saying that the Bard's works should be cleaned up - literally bowdlerised.


Bowdler’s cleansing of Shakespeare’s work was ridiculed as tampering and censorship; however, the time is coming when God will seek to clean and purify all language, and therefore thought, enabling humanity better to praise Him apart from the “blemishes” of perverted words and concepts, double meanings, and pagan references so common to all languages today.

Yup, bring out those blue pencils. Why should the Taliban have all the fun?

The feature article by John Meakin is on migration into Europe. Meakin paints as dark a picture as he possibly can then concludes, not unexpectedly, that there is an "Unprecedented World Crisis Ahead!" and the only solution is "Thy Kingdom Come!" (Yes, the exclamation marks are his.)

You've got to give Wally Smith credit for his one-page article on Easter. First, he actually limited himself to one page - perhaps he could pass on some tips to Rod. Second, he takes a fresh approach to the well-worn 'Easter is pagan' line.


I believe in the risen Jesus Christ, Son of God, Savior of mankind. I believe that after His crucifixion on Passover, He was three days and three nights in the heart of the earth—as He said He would be. I believe He was then resurrected by His Father, restored to the glory He had with His Father before the world was.

He was the perfect Passover Lamb. He also became the perfect wave-sheaf offering, accepted by His Father as the first of the firstfruits. In His resurrection, I see confirmation of the promise made to all those who truly follow Him that they, too, will one day be resurrected, to live forever as He now does.

Consequently, I do not keep Easter.

Had me going for a minute. Bonus points for originality.

Doug Winnail has an article entitled "Five Books that Changed the World." What? Four more than Doug's annotated, leather-bound wide margin KJV? Well, no. It's a bit of a cheat because the reference is to the Pentateuch, the five books ascribed to Moses.


The five books of Moses, also called the Pentateuch—Genesis, Exodus, Leviticus, Numbers and Deuteronomy—are part of the Hebrew Scriptures (the Old Testament) and claim to be the inspired words of God (Exodus 3:4–6; 2 Timothy 3:16). In striking contrast to other “holy” books, the Bible—including these five most ancient books—contains unique, internal self-authenticating evidence in the form of nearly two thousand prophecies that confirm its divine inspiration. No other text than the Bible—not the Quran, not the Upanishads, not the Tao Te Ching—can rightly claim to contain such specific prophecies that correctly foretell future events.

Doug wants to prove the inspiration of the Bible by day-dreaming about the non-existent predictive prophecies he thinks are in it? Good luck with that Doug.

There's more, but you know the saying about too much of a good thing...


Can we really be sure that the articles in Tomorrow's World aren't really forged by anonymous writers who never experienced the LCG or Meredith first hand and written decades after the alleged period covered by the articles?

"In 2013, jihadi groups formed the extreme Sunni Islamic State (IS) and established an Islamist caliphate in northern Syria stretching into Iraq. This greatly added to the violence, repression and to people's fears." (p. 21.)

This is wrong. It is a continuation of Al Qaeda in Iraq founded by Abu Musab al-Zarqawi. How is it that no one in LCG HQ in Charlotte knew enough about that topic to correct that error?


"The PDF is available to download" - Thanks, but I'll pass.

Refox wrote: 'This is wrong. It is a continuation of Al Qaeda in Iraq founded by Abu Musab al-Zarqawi. How is it that no one in LCG HQ in Charlotte knew enough about that topic to correct that error?'

They most likely heard it on Fox News. The news channel of the apostle wannabees.