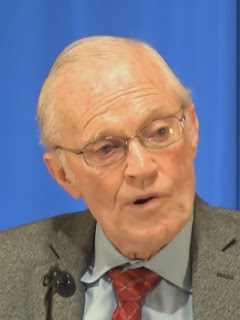 Herbert Armstrong died thirty years ago on January 16, 1986. On that anniversary this year Rod Meredith, now 85 years old, recorded a tribute honouring Armstrong. It is available on YouTube and runs for one and a quarter hours. Curiously, audience shots appear to have the wrong aspect ratio and have the feel of something filmed on a much earlier occasion then spliced in. One wonders why.

Rod appears frail, as you might expect, but the fire of his zealotry still burns bright. This last living lieutenant of Herb Armstrong seems to be reliving old battles.

Though the topic is 'honouring Herbert Armstrong', Rod not unexpectedly ranges far and wide, up hill and down dale. The key message is a much-repeated exhortation to stay with the 'truth' no matter what. Christ's return is probably, you'll be pleased to know, somewhere between eight and twenty years from now. Not that Rod will have to worry.

One intriguing comment, made in passing (beginning around 24:00), concerns the role Loma Armstrong played in assisting Herb with reading tasks. Rod states that Herbert was a slow reader and had Loma read him "whole sections of books". Rod confesses he is a slow reader too, and that Herb would "read slowly and mumble". Loma was the one who could skim read and then direct him to the important parts. This is decades before the failing eyesight of his latter years when he resorted to a large magnifying glass.

Was the early difficulty visual or what might today be called dyslexia? Richard Nickels recalled, "I wrote an article especially for HWA using an ORATOR giant type size so he could read it with his one weak eye." Perhaps it was both.

Rod gives no clues, and perhaps the distinction never occurred to him. Could it be that, for whatever reason, written position papers were simply a waste of time when trying to convince the End Time Apostle? Documents like the STP were irrelevant, it was really about who had his ear at the time. Rod gives an unintended example at around 43:00, the change from a Monday to a Sunday Pentecost.

Which gives one pause to wonder at the oft-told tale of all those hours spent all by himself at the Portland Public Library acquiring "the equivalent of a college-level education". It might also help explain his aversion to scholarship.

The blind leading the blind? Armstrong's visual impairment is rarely factored into accounts of his life. It was clearly a limitation on more than one level.

As for Rod's disinterest in reading, it explains a lot too.

Who needs to read when you can just flip stuff off from the top of your head?

Ramblin’ Rod, Ramblin’ Rod
Why you ramble no one knows...
Wild and Hard blown, that's how you've grown
Who can cling to a Ramblin’ Rod?

So a guy who learning disability, sitting alone in the public library, which by definition isn't going to have university quality stacks, for just 6 months, can accomplish as much as a person without learning disabilities can in the 36 months it takes to earn a four-year degree, under the tutelage of a range of much more knowledgeable professors? Surely a modern miracle, if ever there was one. Or not.

Those in police science inform us that scammers change with technology, always raising the ante to stay ahead of the curve. Once a scam is known and has been debunked, it fades as new versions suddenly appear, are profitable, and take over for a while. The Armstrong scam has been dead for years. However, those who would continue to perpetrate it have abjectly failed in updating and staying ahead of the curve!