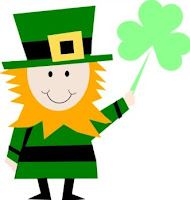 Tis the day for the wearing of the green. Or it will be in a few hours, depending on where you are.

But not for the dead-eyed literalists in the more doctrinaire COGs, Dave Pack's Restored Church of God for example. The Real Truth website features an article warning readers about all that nasty paganism.

For starters, we're advised that "the concept of a dead “Patron Saint” is contrary to what the Bible teaches."

Leprechauns? "God tells those who follow Him that such beliefs are worthless: “For the customs of the people are vain…”"

Wearing green or having a glass of Guinness? Licentiousness! "I Timothy states, “Have nothing to do with godless and silly myths”..."

Talk about killjoys. Dudes, lighten up.

Recognize that, as with many other manmade holidays, St. Patrick’s Day is filled with pagan customs. The shamrock, green paraphernalia, and a plethora of fantasies about Patrick, including his fictional function as “Patron Saint” in heaven, are simply empty traditions. Such manmade holidays were adopted as early church leaders began “laying aside the commandments of God” to “hold the tradition of men.”

It's not hard to see where this is going. "God commands that seven Feasts be kept throughout the year."

The Puritans had nothing on these guys.

"I Timothy states, 'Have nothing to do with godless and silly myths'..."

...but silly myths about gods, well, those are a different story...

Excellent juxtaposition and clever turn of phrase Stephen! Worthy of its own meme. If I had more time for frivolous projects, I'd create some humorous posters with that slogan to share on Facebook. (Where I have many exWCG friends.)

One thing I was always pleased about with Ron Dart...he regularly crusaded in the last decade or so of his life, in COG circles, against what he called RAPpers.

Ranting preachers who specialized in a stance of Radical Anti-Paganism. Finding a fiendish pagan connection in every innocuous custom.

Another thing I miss about Ron Dart...for years up until his 2010 accident left him with severe brain damage, you literally could regularly find him around midnight on a Friday night just hanging out on his CEM forum, chatting with everybody, sharing jokes and being totally informal. Including talking about his favorite movies and TV shows and such. I'm pretty sure he would have been the only man with former experience pretty high up in the old WCG out there in COGland these days who would have admitted to being a big aficionado of Monty Python. One of his favorite movies was Fifth Element. Probably not a pick for Flurry or Pack or Rod either.

On St. Patty's day, I'll be thinking of my favorite Irish character on TV, Fiona Glenanne on "Burn Notice"