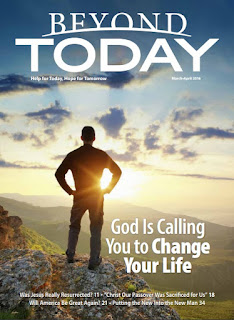 The lads at the United Church of God have just released the second issue of their relaunched flagship magazine Beyond Today.

A major theme is the UCG's position on Passover (vs. Easter); "The Biblical Alternative to Easter" and an untitled follow-on by Jerold Aust. There's a hurry-up article encouraging the waverers to get baptised ("Are You Putting Off Your Salvation?"), and Peter Eddington asks "Was Jesus Really Resurrected?" The quality of Eddington's discourse might be judged by this quote: "Some of the New Testament books were written by eyewitnesses only a couple [of] decades after the purported events. If the whole story was made up, how credible would that have been?"

Defying any speculation about UCG's abandonment of British-Israelism, Darris McNeely has a predictable rant based on American exceptionalism. He asks (rhetorically) "Will America Be Great Again?", with an accompanying plug for the BI booklet. (Any old timers out there remember GTA pontificating on how, after Korea, "America has won its last war!"?)

How's this for a jingoistically myopic introduction?


I have on my desk a copy of Andrew Roberts’ A History of the English-Speaking Peoples Since 1900. The 2008 book shows the positive impact of America and Great Britain and others in the world since the turn of the 20th century. From the defeat of communism and Nazi aggression to the invention of vaccines and new crop strains that saved millions of lives, the story is one of the most remarkable in history.

The author states at the book’s conclusion that the English-speaking nations are “the last, best hope for mankind.” He goes on to say that, according to the lessons of history, the time of dominance of these peoples will fade and other powers like China or one yet to appear will rise and exert a “global sway.” Roberts concludes with a note of prophetic inevitability in saying that when the time of the English-speaking peoples fades, “the human race will come to mourn the passing of this most decent, honest, generous, fairminded and self-sacrificing imperium” (pp. 647-648).

Should go down well with the BI brigade. Later he states:


America and the English-speaking nations have forgotten who made them great. These nations created the greatest expansion of wealth in the history of the world. But how? Because the God of Abraham was faithful in His promise to bless that patriarch’s descendants in the modern age. Yes, America and Britain are the foremost nations among them. Sadly, we don’t know this—as Isaiah said, we “do not consider.” Because we do not know this, we have turned to false religion and moral sin.

A nation like America cannot be replicated in this world. If it could, it would’ve already happened through all the foreign aid, intervention and nation-building. There is only one America. God placed this land and its people here for a divine purpose. It has grown large and great and free because the God of heaven made a promise to a man named Abraham. God has fulfilled that promise in history, and because He has, He will fulfill the spiritual promise of the offer of eternal salvation to all peoples.

Sounds to me like BI is alive, well and pulsing through the veins in UCG.

Scooping the unintended irony award is the anonymous writer of "False Predictions: How to Separate Truth from Counterfeits." There's also heavy promotion of the "America the Time is Now" presentations which, from all reports, have been wildly unsuccessful so far.

A closing observation. When the lads at UCG are referred to as "the lads", that's pretty much the literal truth. Women staff members, writers, even copy editors? Nope. Might as well be the 1950s.

No scientific support is advanced for their bizarre race theory.
Might as well believe you can treat Heart Disease & Cancer with Grape Juice.
Oh I forgot, that belief is popular amongst these same simpletons!

I know that UCG likes to refer to Beyond Today , as "BT". I would wish that the would use the first two letters from each word and refer to their publication as the "Beto", giving it a more international flavor. Beto is a nickname for boys in both Italian and Spanish.

Let's face it, if someone picked up a copy of this at, say, Supercuts, unless they were mentally unstable, they'd say to themselves "Why this just has to be the religious version of the National Enquirer!" Maybe the occasional white supremacist or neo Nazi would have his curiosity piqued, but, even they would soon lose interest.

The Salvation article amounts to a Protestant Altar-Call:
- an abandonment of HWA's 'Second-Chance' paradigm -
Flurry & Pack should jump on them for this apostasy.

One thing is finally clear -- there's no more Good News in the UCG.

Oh, OK, I guess it's expected some how, so here's the response about United and British Israelism (via Robert Theil) in the unlikely circumstance you missed it:

There's simply no end to debunking British Israelism, is there -- no matter how thoroughly we do it?

Where are the women?

It's tempting to say, at home, barefoot and pregnant, but these are modern, more enlightened times.

No, they're out getting the coffee and pastries, as well as running other menial errands in supporting their men.

"From the defeat of communism and Nazi aggression to the invention of vaccines and new crop strains that saved millions of lives..."

At least vaccines are viewed as a good thing in that UCG article. It is terrible that to this day people influenced by HWA continue to promote anti-medicine superstitions.