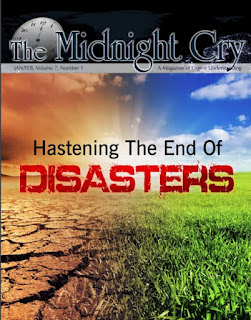 The Midnight Cry calls itself "a magazine of urgent understanding". Not so urgent in that not a single issue appeared last year. But wait, 2016 has kicked off with an overdue reappearance.

Cry is published by the Church of God's Faithful, a breakaway from PCG, led by Robert Ardis. Though it has a low profile among the splinters, it manages to operate mailing addresses in England and New Zealand as well as its main office in South Carolina.

Ardis obviously believes that he is a key figure in the great scheme of things.


I have stated quite a few times that I believe we of the CGF have as much or even MORE faith than many of the righteous characters of the Old and New Testaments! (p.3)

I have not seen God or heard His voice. But I have, on many occasions, felt His presence and have been directly guided by His Spirit to certain verses of Scripture that He wanted me to apply in my life. The CGF is God’s true Church, and we use the Holy Bible, through which Christ speaks to us. (p.3)

And wouldn't you know it, CGF is mentioned in Bible prophecy.


Gerald Flurry was raised up to lead the Laodicean work of Jesus Christ and to reveal the apostasy in the WCG. But, as predicted in Revelation 3:14-20, the Philadelphia Church of God (PCG) became a lukewarm church doing Mr. Flurry’s work instead of the work of God.

However, God had reserved a few faithful brethren to carry on the Philadelphia work of the sixth candlestick of Revelation 3:7-13. And they were ready (although they did not know it) for the Day of the Lord and the secret coming of Jesus Christ as “a thief in the night” (II Pet. 3:10). This happened 12 years after Mr. Armstrong gave his final message to the WCG at the Feast of Trumpets 1985! The Gospel of the Kingdom of God had been successfully proclaimed to the world as a witness to all nations. Now it was time for the message, “The Kingdom of God is at hand,” to go out in power!

On the Feast of Trumpets 1997, the Day of the Lord came as a thief in the night, and the living Christ came suddenly to His Temple (Mal. 3:1). A new 19-year time cycle also began on that date on the sacred Hebrew Calendar and we have now come to the 19[th] year of this time cycle. Has God given us this one 19-year period to get the bride of Christ ready for her Husband? If He has, we have much work to do. (p.3)

Yes, those 19-year time cycles are back.


This is a sure thing. Revelation 3:9 will be fulfilled, and I still wonder whether we have only a little less than two years to complete our work of preparing the bride! (p.4)

Ardis relates a personal testimony to his faith.


I am a sick, old man and it is difficult even to write this article... I look forward to the healing that God is going to do for me soon, and for all of us in the CGF... I have been afflicted with cancer of the bone marrow for seven years. It has been a “thorn in my flesh”! (p.4)

So here's the reason for the blip in publishing. Yet Ardis' health issues don't seem to have led him to secure a smooth transition for his church. Nor has he taken the tough option of reconsidering the prophetic speculation that led him to create CGF. Once he passes from the scene, as we all must ultimately, his work will be forgotten. The hosts of heaven are not coming to his rescue at the end of any imaginary 19-year time cycle. "Urgent understanding" is required, but seems in limited supply.

I wonder whether this will be one of the last issues - if not the very last - of The Midnight Cry.

Somehow it all seems a bit sad and pathetic.

Update: Robert Ardis passed away less than a week ago on St Patrick's Day, March 17, according to correspondence on the Exit & Support Network. He was aged 84. Thanks to Redfox for passing on the information.
Posted by Gavin R at 13:44

At the very best -- and stretching it quite a bit -- it's maybe a few minutes before noon.

Robert Ardis passed away on March 17, 2016 according to Exit and Support Network.

Thanks for the information. I've added a note to the bottom of the post.

Glad to be of service. Keep up the good work!

Sorry. I was wrong. It was a few minutes before midnight.