A Parallel Universe: the March BA 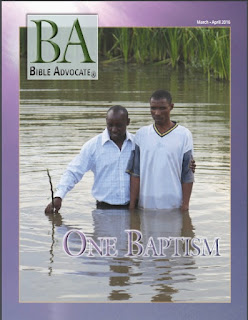 The Bible Advocate is unlike any of the Armstrong COG publications. Rarely, if ever, is there an article featuring prophetic speculation. No BI. No inane punditry on the hidden meaning of world news. It's clearly not in the DNA of its publishers, the Denver-based Church of God (Seventh Day).

CoG7 is a fundamentalist Adventist body, no question, but it seems to avoid the tabloid apocalyptic speculation that goes hand-in-glove with its two larger relatives, the sibling SDA church, and its ratbag pack of daughters in the Worldwide Church of God tradition. When Herbert separated in the 1930s (they must have thrown a party!) CoG7 was left to follow its own course of development. It currently has churches established in forty countries (p.30).

Back to the magazine. The March issue is themed around baptism. But where, you might ask, are the proliferating exclamation marks! the CAPS, the frequent use of italics? And the lads at UCG's Beyond Today take note, just look at all the names of female writers and staff.

Many hardline Armstrongites would scoff, searching in vain for the heady blend of speculation, pontification and stupidity-on-steroids that they're addicted to. There's absolutely nothing Meredithesque here. Bland by comparison? Yes, but living off a diet of Rocky Road has health consequences. By contrast, a low-key, conversational tone has its own appeal. Not that I'm even faintly endorsing CoG7, just noting that it's one of the healthier options on the lard-laden COG smorgasbord.

The BA has been around a long time (this issue is Vol. 150, No. 2). It's already burned off The Plain Truth (unless you count the invisible Albrecht magazine), The Good News (both versions), GCI's Christian Odyssey, Meredith's The World Ahead, and I daresay it'll burn off the current crop of splinter mags as well.

I seem to recall a story about a race between a tortoise and a hare.

Yes, and the CoG7 just happens to be around ten times larger than all the Armstrongist churches put together (not that anyone could put them together, mind you).

The CoG7 hardly ever takes any note of the Armstrongist cult. It just doesn't really exist for them.

And really, if we look at the grand scheme of things, does the Armstrongist cult really exist -- any more than a statistical anomaly?

For the most part, the world at large doesn't think so and doesn't even notice (Herbert who? Worldwide what?).

Not bad for being "THE SARDIS CHURCH"! LOL!

The theory of church eras simply provided an opportunity to apply labels. William Miller taught that the Laodicean Era began shortly after 1844. Look at how the ACOG splinters use Laodicea to trash one another. Also, for decades, HWA's application of the Sardis stigma to COG-7 stymied their growth. It caused a lot of unneedfully hurt feelings.

Also, for decades, HWA's application of the Sardis stigma to COG-7 stymied their growth. It caused a lot of unneedfully hurt feelings.

And they didn't sue?

What were they thinking?

Douglas, can you provide any info on CoG7s size in North America and/or in other parts of the world?

I seem to remember one article said that in India they have 209 churches. That would be more than most of the surviving Armstrongist churches have world wide. There is quite a large contingency in Mexico and South America.

Ironically, I don't have figures for North America, although one source claims that there are over 200 congregations in the United States and Canada with an estimated 11,000 members as of 2012.

I want to be clear that I am not a member of the CoG7D although I have attended (as I have several other Sabbath keeping groups).

I remember when (someone had subscribed for me) I received the first Bible Advocate in the mail and I saw the "BA" logo in the upper left hand corner. Because I hadn't had an account there for some time why I was being sent literature from the Bank of America.

Sometimes it's wise to consider your branding....

I subscribe to this magazine and have met Calvin Burrell, and others in this church. I ma no longer a Sabbitarian, but these are good people!