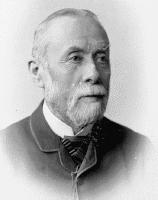 Among dyed-in-the-wool COG preachers, Alexander Hislop is regarded as an authority, and his 1858 book The Two Babylons is treated as an accurate historical source second to none. Hislop is seen as an unimpeachable expert on the 'true' origins of Easter.

In reality, the Reverend Hislop was a rabidly anti-Catholic Presbyterian. Presbyterianism in those times eschewed anything that was regarded as 'Romish', and Hislop played the part with relish (he also inveighed against the evils of instrumental music in church services). Lester Grabbe, a name familiar to many Ambassador College alumni and a casualty of the purges that followed GTA's ouster, calls Hislop's work "naive history" (Grabbe went on to a distinguished academic career at Britain's University of Hull).

Roger Pearse asks a few more pertinent questions about Hislop's credibility in a recent blog post. Worth reading if you've ever wondered just how much weight to give the old thumper when he's quoted in COG literature.
Posted by Gavin R at 14:45

Email ThisBlogThis!Share to TwitterShare to FacebookShare to Pinterest
Labels: Easter

The Worldwide Church of God was also enamored of Ralph Woodrow, who wrote a similar book titled "Babylon Mystery Religion: Ancient and Modern." The fact that Woodrow was a more modern author than Hislop, but not connected to the WCG, made his work popular in WCG circles.

Woodrow's work was heavily dependent on Hislop for its main points. His book was quoted endlessly, many WCGers (including me) had our own copies, and you can still buy it (used) on Amazon.com . The one place you CAN'T buy it is on the website of the Ralph Woodrow Evangelistic Association! Because quite a few years back, Woodrow RECANTED the Hislopian portions of his book and ceased publication of it. He had looked into the alleged "scholarship" of Hislop, and found it to be pathetically shallow, riddled with speculation and error.

He ended up writing a new book, "The Babylon Connection?" that you can get from his current ministry website. You can read his partial explanation for recanting in the following article on his website.

Here is an excerpt from this page, quite revealing!

"For a number of years my book BABYLON MYSTERY RELIGION was very popular, enjoyed a wide circulation, and was translated into various languages. To this day, we do not cease to receive orders and inquiries about it. Despite its popularity, several years ago we pulled it out of print and now offer a replacement book THE BABYLON CONNECTION?

Because misinformation about this decision persists on the Internet, and in other ways, the aim of this article is to set the record straight.

According to one rumor, “the Catholics” put so much pressure on me, I had a heart attack and almost died! Consequently, I “recanted” and wrote the other book. There is no truth to this!

Another rumor is that my motives were financial—my desire was to be popular and make more money. To the contrary, BABYLON MYSTERY RELIGION was extremely popular and provided more income to our ministry than all other books and offerings put together! We have faced much financial loss because of the decision to pull the book out of print.

Some letters we have received have been very warm, commending me for honesty and integrity, expressing appreciation for the clarification provided by the replacement book THE BABYLON CONNECTION? But other letters have been mean-spirited—that I am “stupid,” “scum,” “scared of the truth,” a “low down coward,” a “traitor to Christ,” following “a false god,” and am an “undercover Jesuit”! One even said, “I hope you die soon, I want you dead!”

It puzzles me how some can be so fanatical against one set of errors—or what they perceive to be errors—only to develop greater errors: becoming judgmental, hateful, and dishonest."

And here is a short excerpt from his comments about his new book.

"One can check the articles on “Nimrod” and “Semiramis” in recognized reference works. Not one says anything about Nimrod and Semiramis being husband and wife! They did not even live in the same century!

THE BABYLON CONNECTION? shows that claims about Babylonian origins often lack connection. Was Nimrod a deformed, ugly black man, and Semiramis a beautiful white woman with blue eyes and blond hair? Was She the originator of soprano singing and priestly celibacy?"

I'd forgotten about those goodies in Hislop!

Ah, Hislop. Reminds me of my all-time favorite moment with Dr. Stavrinides in Pasadena. Yes, THAT Stavrinides, whose Nature of God lectures became a sort of line in the sand for WCG ministers in the 90s.

Anyway, Stav used to teach a Biblical Scholarship class at AC. At one point a guy raised his hand in class and began to wax eloquent about Hislop's Two Babylons, when Stav replied that he didn't know, because he hadn't read the book. Talk about a bombshell. You could have heard a pin drop. Hadn't read it? Hislop? There were stacks of Hislop on the shelves of the AC Bookstore! It was one of the all-time classic reference works in WCG circles! Hadn't read it??? Whaaaaaat?

The student was stunned. He pressed Stav about his answer, and Stavrinides said simply that he had read the introduction, and Hislop's premise was faulty, and when a premise is faulty, the conclusion can only be faulty, so there's no point in reading further.

It was one of those watershed moments for me, and probably for a lot of other people sitting there that day. The student engaged in a "Yeah, but" argument for awhile, but really had nowhere to go with it, and finally gave up. I heard that he later joined a fringe splinter and was given a platform to sermonize for a few years.

I can't even begin to tell you how happy and relieved I was to let go of Hislop, which I did from that moment on. To learn a few years later that Woodrow had recanted on his Babylonian theories was just as refreshing.

Over time, plank after plank was stripped away from Armstrongism. Of course, Stavrinides became the arch-enemy of the HWA loyalist crowd, and even caught some flack from the anti-HWA contingent because of his role in the doctrinal upheaval of the 90s. But he was a brilliant and insightful man, and incredibly funny. I had many refreshing and stimulating conversations with him over the years, and I'll always be grateful our paths crossed.

There is little doubt that things like Easter Bunnies, and Xmas Trees are extra Biblical characters that found root in non-Christian religion. For the sake of argument, lets call these "pagan practices".

I am a Seventh Day Sabbath observer. Lets then assume that to be some type of "litmus test", again for the sake of argument as well.

Here is where the WCG went off the rails. They tried to invent a systemic world history where there was a constant and steady continuum for both the "pagan practices" and for the true "Sabbath Observing Christians".

The problem is that for both groups, there is no direct , "unbroken chain" of succession. The WCG wanted to have the idea that this "battle of the ages" was linear and with both sides giving a provenance of anointing and succession in a direct line to the present day. This is not so.

There is absolutely no historical evidence whatsoever that the hands that laid hands upon you at baptism, were from an unbroken line of Sabbath observers going back to Jesus Christ. In the modern era, Gilbert Cramner, who was the original minister of the COG7th Day, received his ordination from a Sunday observing group called Christian Connnexion. (yes with the X). The 7th Day Sabbath idea did cross over from the Seventh Day Baptists , but not by a minister, but rather an effort of a 15 year old girl named Rachel Oakes, who was a former Seventh Day Baptist who convinced an early Post Millerite minister to the idea. No unbroken line of hands laying hands.

Even the Seventh Day Baptists trace back into the middle ages of Sunday observing Anabaptists and eventually to being a split from the Catholic Church.

The WCG wanted it to be very tidy, so not only did they have their own unbroken lineage, so did Paganism have its own direct unbroken lineage as well. But again, history does not support an unbroken line of paganism from Babylon to the present either. Ralph Woodrow came to that conclusion and as does any serious scholar.

However, nothing is new under the sun. Humans are somewhat predictable in large numbers. I will argue that there have always been those that have sought the true God, free from broad based cultural bastardization, and then there is the "broad way" of simplistic, sensuous and experiential religion. Certain themes and ideas repeatedly pop up over time in history for both groups.

So there indeed have always been the two spiritual schools. One of God and one of Babylon. Each has had its times and places in history, its styles and appearance may vary, its external practices have drifted, but the "spirit" and motivation of both have been indeed constant.

I too sought the "true God." I kept pulling on the thread of yarn from that particular sweater, going around and around. And then one day I got to the other end. And I realized that sweater had never actually existed. It was just a yarn that somebody spun once upon a time. If you spin it around in circles enough times, it starts to seem there's something "extra" there, besides just the yarn.

Judeo-Christianity is just a story folks!

It was not just the materials presented by Hislop that introduced error into the WCG. Hislop's methodology crossed over and became a blueprint for WCG research. That influence is pervasive and readily recognizable in most of the church booklets and articles. Velikovsky enjoyed similar influence in Armstrongian circles.

Dr. Stavrinides.
I used to like his sermons. They were on the 'tape to be played this Sabbath' list. He should have been running the church instead of that high school dropout Herbie.

What ever happened to Dr. Stavrinides?

The lesson we learned from Winston Smith (1984)is that history is never an objective account but rather political tool.

Last I heard Stavrinides was teaching at Azusa Pacific University, and students were raving about his classes instead of accusing him of heresy and the deadly sin of intellectualism.

Yes, Stavrindies is teaching Greek and other classes at Azusa Pacific College.