Discern for March - the "sort of" magazine 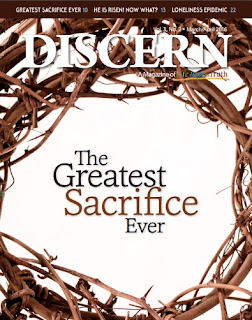 Every self-respecting church needs a promotional magazine (except Joe Tkach's GCI apparently), so it's no surprise that the UCG malcontents who formed COGWA (Church of God, a Worldwide Association) have put a good deal of thought into their own flagship publication, Discern.

But is it really a magazine when the only way you can read it is as a PDF? Granted, it's a frugal game plan. No postage costs, no left-over copies gathering dust. Whether people actually read PDFs in the same way they read hard copy is a moot point. There's a certain pleasure in sitting back in an armchair, turning real pages at your leisure that you simply don't get staring at a screen. All of COGWA's 'literature' seems to be available in this form, and only in this form. Time will tell whether it's an effective strategy for the long haul.

If this were a mainline church publication, you'd say it had an Easter theme, with a crown of thorns on the cover. Open it up (so to speak) and the graphics and layout are quite impressive. The first major feature you hit is a lengthy article by Clyde Kilough on Passover. That's followed by one in a similar vein by Jim Franks. Keeping on message is He is Risen! Now What? by Jeremy Lallier. Obviously, COGWA wants to proclaim its message "in due season".

Rick Avent moves to other matters with Does God Exist? He's up to Proof 3: The Origin of Life. I couldn't bear to invest time reading this, life is so short, and I have a copy of New Scientist that's higher on the priority list. Do you think Rick reads New Scientist?

Mike Bennett writes under the intriguing title, 5 Foolish Things we do to Foul Up our Future. Reading virtual COG magazines isn't on the list. Becky Sweat writes on The Loneliness Epidemic. Neal Hogberg beats the drum on ISIS with An Apocalyptic Crisis.

You get the impression that Discern requires a better standard of journalism of its in-house writers than, say, Tomorrow's World. Faint praise given the standard over at TW. That said, it's the same message you'll find in other COG periodicals. The articles in one are interchangeable with another.

(If you're interested in what's in the latest PCG mag, The Trumpet, you might like to check out Redfox's Living Armstrongism blog where he's got a detailed outline.)
Posted by Gavin R at 16:04

Thanks for the link. It is appreciated.

No problem. We're playing for the same team.

Response to the loneliness epidemic:

You're never alone if you have a cat.

How ironic for Christians when Gospels/Acts are fiction!

Gavin, you seem to be overly impressed with neo-Darwinian evolution. While it is impatient of debate that there is a surfeit of crackpot creationists like Ken Hamm around, it is certainly not the case that neo-Darwinian evolution is unchallengeable . It must not be given a free pass. There are reputable voices which have been raised against the received wisdom of evolutionary thought. I wonder whether you are acquainted with Stephen Meyer who has written the highly challenging "Darwin's Doubt" and "Signature in the Cell", and just last year published his formidable and must-read "Debating Darwin's Doubt". If you have a serious interest in this debate, you can't not read Meyer. Also Michael Denton has just published his "Evolution: Still a Theory in Crisis", 30 years after his well-known "Evolution: A theory in Crisis". Denton and Meyer can't be dismissed as kooks. You should also listen online to Myer debating some leading neo-Darwinian evolutionists. He is razor-sharp intellectually. Reading "New Scientist" is fine(It's high on my list, too, along with "Scientific American") but, unfortunately, I find that generally the best liberal minds don't read the best conservative minds, while the converse is not the case. There is a hubris among the cultured despisers of conservative Christianity and I hope ,Gavin, that you have escaped it.
In find in Biblical scholarship, philosophy and science particularly that many of the leading liberal thinkers don't generally engage the best minds who oppose them. There is a scorn borne of arrogance and often ignorance, as they are unaware of the caliber of some of these opposing scholars. Many times I find their bibliography not even listing some of the most challenging works on the other side. As someone who holds provisionally(open to fresh evidence to the contrary) to a generally conservative framework, I make sure I am reading the finest opponents. My library has far more books which disagree with my position than those which converge with mine.There is no New Atheist I have not read. And incidentally, there is no critical work on Armstrongism which I don't have in my library. Try me! I find, ironically, that many liberals are very illiberal in their thinking Ian Boyne

Really? You have "Assertive Incompetence: An Introduction to Management Malpractice" in your library?

@ Ian. Thanks for your comments. While I take your points, I notice that Michael Denton's book is published by the Discovery Institute (where he's a senior fellow), not an academic publisher. Stephen Meyer is also associated with the Discovery Insitute. His publishers are HarperOne (HarperCollins' religion imprint) and the Discovery Institute. When these guys graduate to something more scientifically relevant than that, maybe they'll be taken more seriously. I think Wikipedia has it about right in their introduction on DI.

"The Discovery Institute (DI) is a non-profit public policy think tank based in Seattle, Washington, best known for its advocacy of the pseudoscience intelligent design (ID). Its "Teach the Controversy" campaign aims to permit teaching of anti-evolution, intelligent-design beliefs in United States public high school science courses alongside accepted scientific theories, positing that a scientific controversy exists over these subjects."

You write: "I find that generally the best liberal minds don't read the best conservative minds, while the converse is not the case. There is a hubris among the cultured despisers of conservative Christianity..." I'm not sure the liberal/conservative dichotomy is even relevant in a discussion about science. It's about evidence, peer review and openness to change - as needed. Nor is it about "cultured despisers". How cultured you are is irrelevant.

I appreciate a strong opinion that takes a different tangent to mine. Those views are always welcome here.

Gavin, be careful of the guilt-by-association fallacy. The fact that these men are published by the Discovery Institute is irrelevant to their academic credentials and quality of their argumentation. And I can tell you--and provide sources if you ask-- that there are learned scientists(not just Francis Collins) who reject neo-Darwinian evolution and they have no association with Discovery Institute or any other ID institution. Look at their credentials earned from highly reputable universities. And, of course , I am not using the argument that because there are weaknesses in Neo-Darwinism it means young earth creationism is true(or creationism for that matter) I am just calling for more open-mindedness and epistemic humility. As one of my favourite atheistic philosophers, John Schellenberg would say , considering evolutionary deep time, mankind is too young to indulge in any intellectual arrogance by dogmatically closing off options. I strongly recommend his books "The Wisdom to Doubt", "The Will to Imagine" and his latest "Evolutionary Religion". They provide an antidote to scientism, Gavin. Ian Boyne

I was just interested in how complete your library was.

Has anyone beside myself read "Genesis and the Big Bang" by astrophysicist Gerald Schroeder? The book makes an excellent case for God having utilized a guided evolutionary process for creation. The resulting analysis is harmonious with Nachmanides' commentary on Genesis 1.

No I have not read "Genesis and the Big Bang" but I have read his "Science of God" I am doing quite a bit of reading now in the controversy over Genesis, Genesis and science and genesis and literary genre John Walton is particularly useful in Genesis and literary genre. There are some very good debates on an excellent podcast out of Britain done by Justin Bryley called "Unbelievable" on Christian Premier Radio. Bryley gets the best and brightest among atheists and theists to debate every Saturday afternoon. Richard Dawkins, Lawrence Krauss, Dan Dennett--every major atheist has appeared. There have been some very good debates on Genesis. I never miss an episode. I have also read a lot on theistic evolution and while it attempts to solve some problematic issues for creationism, it raises some serious philosophical and theological problems for me. I am still open, though. Ian Boyne

I noticed over on Corky's blog many interesting essays like this 3-part series on Genesis:
ex-christadelphians.com/p/the-pagan-origins-of-book-of-genesis-1.html

Fans of Ken Humphries, like me, have listened to his guest appearances on Premier.