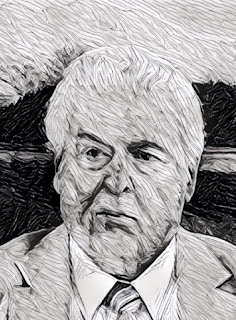 Pack, Flurry, Meredith, Thiel, even Weinland. The narcissistic sect leaders we all so love to comment on and critique. If this was a soap opera, these would be the stars. Stringing along would be the leaders on a leash; Kubik and Frank (it's a shorter list) under the "also starring" label. Everyone else is relegated to an occasional "guest appearance". I suspect David Hulme is looking at a complete contract cancellation.

But trotting alongside patiently, often barely noticed, is Fred Coulter. Fred parted ways from the mother-ship shortly after Ted jumped into the shark-infested waters in 1978. Prior to that he was a California-based pastor, produced his own self-published Harmony of the Gospels and occasionally hosted a call-in radio show. Fair to say that, even then, he was a bit outside the usual ministerial stereotype. Perhaps he jumped before he was pushed. Fred established the Biblical Church of God (BCG) and produced a magazine called Bible Answers.

Alas, Fred had a Spanky moment (or more accurately, in later years Spanky was to have a Fred moment). Problems arose. The peasants were revolting. People were getting ideas above their station. Fred relaunched with the Christian Biblical Church of God (CBCG)... leaving the stroppy underlings out of the picture.

While Fred doesn't have a lot of profile, it isn't through lack of effort. In some parts of the world (New Zealand is one of them) the faithful followers of Fred are batting in the big league (the big league here being any COG sect with a mailing address and a minister).

It seems to me that Fred isn't to be counted among the more abusive COG leaders, which may be why he flies under the radar as much as he does. Listening to his sermons is an acquired taste - he makes Rod Meredith sound simply riveting by comparison. Don't believe me? Try his 1 hour 20 minute ramble on Brexit.

CBCG has recently held an Elders' Conference. Counting spouses, kids and curious members, over 150 are said to have turned up at the Hilton Cincinnati Airport Hotel. Actual elders? 17, including Lyall Johnston from New Zealand. Other registered attendees? 7. 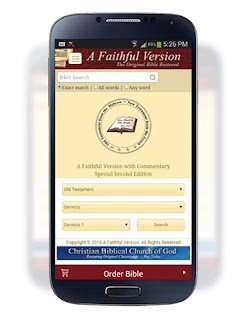 (Lyall is an interesting chap. I knew his parents and brother's family in Invercargill many years ago. Genuinely nice people. Lyall returned here several years ago in the wake of WCG's dissolution and - please correct me if I'm wrong - attempted to get credentialed as a mainline minister. He apparently took on the job with Fred after the Stephen Gough fiasco and an initial transfer of leadership to son Chris Gough.)

Being a sprat in the fishpond doesn't stop Fred from thinking big. Some years ago he translated the New Testament into a kind of updated King James Version (A Faithful Version). No mean feat. How many COG translations other than Fred's can you think of? The Old Testament followed, but as I understand it he just bought an existing translation then edited it to fit his agenda, tweaked the proof texts (Hebrew isn't on his CV), then bunged it on the front of his New Testament. Full page ads in the BAR followed lauding the excellencies of this Bible, though he had to scrape pretty deep to find any favourable reviews to quote.

Speaking of the Bible, hallelujah, there's an app. The Fred Bible on your Android or Apple device. I needed to have a lie down and slowly sip a cup of weak tea just to bring my excitement under control. Sadly, I have too many thirsty apps on my phone as it is, so I guess I'll give this one a miss.

You can find his booklet about British Israelism on his website.

Don't care how anyone whitewashes him -- he's still one of the Kooks (see chapter 3).

Fred Coulter was the first WCG minister I heard give a sermon at the first WCG service I attended in my life in Boise, Idaho at the tender age of 14. It got me started into what I wish I had never started.

Vestigial leftover parts from a bygone era, who after the deaths, will be in the dustbins of history. None have succession plans, nor successful expansion marketing programs.

Hey, Black Ops Mikey! I thought I was the only one who would remember the KOOKS book. I see on Amazon they are selling a 2001 version now. Same cover though, as the one I have on my bookshelf that I bought new clear back in 1994. I was particularly fascinated at the time that the very first chapter was about Anglo-Israelism... and yet only mentioned Herbert Armstrong in passing in one paragraph of a ten page chapter! Even JH Allen only got a one-sentence nod. All the other major players they mentioned were names I never heard before. (Other than a brief mention of Randy Weaver at the end...his Ruby Ridge Standoff had occurred barely a year or so before Donna Kossy wrote her book, so he was the last in her list of prominent B-I guys.)

It amazes me how many COGite leaders want to be HWA. Even when I was a member of WCG, HWA was not my ideal. The expensive suit, standing up at services and chewing people out, aloof, repetitive. Sometimes I wonder why these guys just don't get an HWA mask from a party store and wear it around.

I find it droll when now "Special Speakers" fly around to a few tiny feast sites
belonging to some COGite offshot in imitation of HWA, GTA and other glib types in the old WCG ministry. For some, the profile of HWA is as alluring as being a Hollywood star is to others. I do not understand the magnetism.

Many wonder if HWA actually believed the heresy that he preached or if he just did it for money. Was it the case that he was a true believer in heresy and the money making engine was an unintended and collateral bonus effect? We have many COGite leaders that should give us some insight into that, since they have molded themselves after HWA. They seem to all believe they are great leaders called by God. No doubt many of them believe they are The Apostle. Ethical impairment or delusion - the difference is important. If someone is a calculating crook it bespeaks a sanity that is not present with those who have delusions about their personal greatness. Is the bulk of the COGite leadership a nest of criminals or a looney bin of people who need therapy?

Yes, NEO, I agree. All the ACOG leaders seem to aspire to be the Elvis of Armstrongism.

I do not believe that it was any accident that HWA ignored and failed to preach the half of the gospel that he said man had made about the person of Jesus. In the first place, man didn't make the gospel about Jesus, Jesus Himself did that! If you as a preacher ignore or short the "other guy" the one that the gospel is actually intended to be about, it opens the door to making your "franchise" all about yourself. After getting rid of the "inconvenience" of Jesus, that's exactly what HWA did! Only he molded himself more after Moses or perhaps Ezra. And, I've long noted that HWA's disciples and acolytes somehow never get around to identifying and repenting of the old man's sins. If HWA did something, that was the example set by "God's Apostle", a gold standard not subject to revision or correction. Church members today use HWA as their standard to a greater extent than they use Jesus

It is difficult to know what really went through HWA's mind, what his filters may have done to his perception, and frankly, if he even was of sound mind. The narcissism, we could all see. The irrational anger and explosive temper were self-evident. He seemed to indicate in his autobiography that there were some bipolar issues. And, he appeared to fail in all of his close, personal relationships. Unless he was just using Satan as a boogeyman to extract higher levels of offerings, he was paranoid about Satan, too. How can one with those disorders be an effective and loving mentor or spiritual guide?

They should just have a form of "Amercian Idol" with the top 12 finalist COG leaders competing. They get to give 5 minute messages. Each week , the audience, whether COG or not, votes online and one leader is removed from the competition.

Would love to see Simon, Howard Stern, Paula and Keith Richards reviewing them all.

Byker: You bring up an interesting point. That is a belief among COGites in the words and actions of HWA as if these forms of information had a divine status. For them the Bible is the Torah/Tanakh. And HWA's words and behavior comprise the COGite Talmud. And this odd Talmud is able to trump the Torah/Tanakh. And the Talmud in the person of HWA, no matter how bizarre, is never sin. So no solid COGite is going to ever repent of HWA's errors. The is rejecting the holy book, the Talmud.

Did COGites recognize that when HWA was proclaimed to be The Apostle that he could abrogate the Bible as he wished. And he did do this. In an AC class in Pasadena he stated that Paul's pronouncements on marriage in a certain epistle were in error. And he had a right to change Paulian principle because he was of Apostle rank, the same rank as Paul.

In other words, for COGites, if they are faithful to HWA, the Bible says only what HWA asserts that it says.

I heard a minister preach a similar principle at the Field House in Big Sandy. He stated that the "loosing and binding" language in the NT meant that whatever "God's ministry said" was right. That even if the WCG ministers made an incorrect decision, God would back them up. In the aftermath, one of my buddies who worked on campus stated that he knew the Tribulation was going to begin in January 1972 because the ministry stated so and God would back his ministry up. So you can see the confusion that this heretical interpretation creates.

My husband has fallen in with this cult and it scares me. Any advice on how to make him see the light. He's becoming an embarrassment.