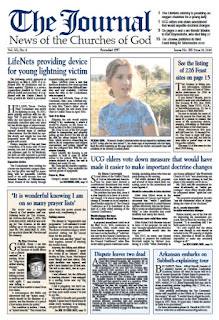 The latest issue of The Journal: News of the Churches of God dated June 30 has been released.

It's a poignant issue with a focus on the late Karl Beyersdorfer and a final contribution from Mac Overton, written just before his death.

Mac was a journalist to the last, writing of his experience in a nursing home, with very human details of nursing care, food and the trials of lukewarm coffee.

There are warm tributes to Karl Beyersdorfer from several individuals who knew him over the years. You get the impression that he was one of the more decent ministers, a man who in many ways "broke the mold", and an individual who was deeply conflicted over a number of issues. Someone can correct me if I'm wrong, but this must be the most respectful and considered reaction to the suicide of a prominent COG figure on record.

What you can't help notice, though, is that none of the articles comes from an LCG source. While LCG has been circumspect in its reporting of Beyersdorfer's death, it seems they've been very guarded in what they'll say. John Sash writes: "I called Gene Hilgenberg, the Living pastor who gave the Sabbath sermon as well as the funeral sermon, for details of dates for this article. Gene did not return my call."

While the latest crop of COG recruiting magazines seem to have been too far down the editorial pipeline to include references to Brexit, some correspondents to the Journal managed to squeeze their concerns and observations under the deadline wire. Brian Harris provides a precis of what he picked up on news media - which seems a bit pointless. In the letters section Lewis and Kathleen McCann from Milton Keynes applaud the decision to leave the EU and hope for a re-connection with "the Commonwealth countries." Somehow I doubt they mean Uganda.

The list of 2016 Feast of Tabernacles sites now stands at 226 around the planet. Ken Westby has downsized his ACD ministry with smaller premises, and has "ruthlessly got rid of about another thousand books I deemed I could live without." Ken, believe me, I feel your pain. I have a similar task ahead of me having already thinned the shelves somewhat.

Of course there's more. Lifenets, UCG's inability to effect doctrinal change, and two octogenarian COGgers who ended up dead - one murdered in a cemetery, allegedly over a doctrinal (!) dispute, the other (the murderer) in an exchange of gunfire with police. Whatever happened to the Holy Spirit boys?

No mention (that I could find) of the upcoming "Scarborough Fair" which kicks off in a couple of days. I'd have thought that'd be a major story. The LCG punkawallahs should be somewhat preoccupied this month.

The tributes to Karl Beyersdorfer were very insightful. Karl's mental challenges in dealing with the disintegration of WCG, and the fact that the events promised as certain have never come to pass must be micro-cosmic for the entire remaining church membership.

These thoughts were not so pressing twenty years ago, but the membership has gotten very old in the short blink of an eye. The motivation of a lifespan has petered out, and now appears extremely unlikely to become fulfilled. One would imagine that thousands of members are attempting to deal with this, and problems will only multiply as the screw tightens. One would also hope that the majority of the members find new, healthier answers, and do not become self-destructive.

I did a quickscan on Beyersdorfer articles.
They mention how "he" was raising churches.

The thousands of "ministers" out there have proven over time to have been nothing but gaspump holders thinking they were "raising" Exxon. It was HWA who was the sheepherder/scottish aristocrat and most ministers turned out to be merely the collie. Not able to hold the herd after the shepperd died to feed the dogs. Thus the clearances of Scotland and the Scots in the diasporra.

The (Mafia) Journal continues to be an annoying window into the insane asylum of boozing alcoholics addicted to crazy predictions made by a kook who was not just nuts but stupid, not realizing that British Israelism is a total crock.

David Havir strikes again, suggesting, but not full on contending that God is going to determine the outcome of the American Presidential election. What if Hilary wins? Doesn't that prove the Bible is wrong, because it does say that God sets up the basest of men? A win for her is a minor defeat for Scripture.

Well, let's face it: Neither one of the candidates has much trust of the electorate. Out of over 300 million people, you'd think we'd have better choices. The real race seems to be down to who the Americans distrust the least -- voting against a candidate in spades.

And then there's the most annoying ad ever: US-BRITISHFUTURE.COM -- an outreach for delusional BI believers.

Then there's The Plane Truth. I now have a headache thanks to the unbelievable nonsense written in the disconnected (continued on page ...) Journal.

There is a bright spot: "What Constitutes a Lie?" Good going Bill Hawkins! You sure put Dixon in his place: "The Journal editor’s point is that I cannot read another person’s mind, therefore it is not proper to say they are lying. I contend it can be proper to say a person is lying even if they believe what they say."

It all gets down to legalities, which, in this day and age, especially considering the lawsuit against the LCG which doesn't seem to be mentioned anywhere. Guess the editor is waiting for the final outcome. Perhaps then it will be worthy of mention. Or maybe there's just to much material to be boiled down into what passes for journalism there (if you want to see journalism, go look at the first three Ambassador Reports in full color).