The demonic and the depressive (2 of 2) 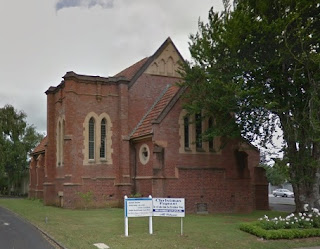 I drive past the local Anglican parish church several times a week. An oppressive stone building, it sits on a main intersection in town. I've only been inside once, around age ten, when my parents drove up from Hamilton for a cousin's wedding. It seemed a fairly strange place to an out-of-town Lutheran kid, not least because of the impressive (brass?) eagle lectern which utterly fascinated my younger self. These seem to be features exclusively associated with Anglican churches and, I'm reliably informed, represent "St. John the Evangelist."

I wouldn't say this particular church is the ugliest I've seen. Churches of a similar age in Melbourne, judging from a trip there several years ago, probably trump this particular structure decisively. These buildings reflect a colonial age in which Christian worship was a rather dour, serious activity. Hushed voices, patronising ten-minute homilies, often cheerless hymnody, no room for spontaneity. The architecture was designed to put you in your lowly place. You attended because it was expected. Good people went to church in the same way good businessmen belonged to service groups like the Lions Club or Rotary. Which denomination largely depended on your family background. Scottish? Tick Presbyterian. English? Tick Anglican. Irish? Tick Catholic.

But times have changed, and the preference these days is for the bubble-gum flavoured mush that the happy-clappy charismatic, prosperity-focused churches vomit forth. The traditional churches haven't kept up. Perhaps they shouldn't even try, but the sad truth is that they're now so out of step with the surrounding culture that their demographic is rapidly sliding into senescence.

On an optimism-pessimism continuum, traditional churches tend to teeter at the depressive "op shop" end. Not that I'm against op shops, they provide a valuable service, but this is often as far as social engagement goes in the historic denominations - at least on a parish/congregational level. When your community PR and profile is mainly associated with this kind of down-in-the-mouth venture, it isn't likely that you're going to attract or retain millennials. It's worthy. It's earnest. But worthy and earnest need to be balanced with something from the joyful end of the spectrum. It makes more sense to me (but what do I know?) to have many local churches vigorously supporting a single initiative alongside other non-religious charitable groups with minimal - or no - church branding.

This whole thing is summed up for me in the audience response to a lecture at Auckland University some time ago by Amy-Jill Levine. Levine is both a New Testament scholar and Jewish. She constantly used humour in her presentation, and very effectively. The attendees were the local Christian theological set. What amazed me was how the humour completely went over the heads of at least half the listeners. I was sitting a couple of seats along from a couple of what seemed to be young religious professionals. They seemed genuinely immune. Certainly they were unappreciative - not even a smile, perhaps they were just puzzled. It was a hard room to play to. The thought that these blokes were going forth into pulpits the following Sunday was genuinely worrying. It still is.

Email ThisBlogThis!Share to TwitterShare to FacebookShare to Pinterest
Labels: Otagosh

Wow, Gavin...since I never visited an Episcopal church here in the US (our branch of the Anglican church), I'd never heard of an "eagle lectern." But when I googled it just now, I discovered they even have their own Wikipedia entry. And if you ask for images, you get a huge selection of the brass beauties! And yes, the Episcopal churches here do have the same thing.

Not that the imposingness of the lectern makes the boring men speaking at it any less boring, mind you.

Op Shop is not part of the 'merican lingo, so I had to look it up. Cool. It's basically what we would call over here a Salvation Army store or Goodwill Industries store. And stands for "opportunity" shop... I'm assuming the "opportunity" is to find some "one man's trash is another man's treasure" item.

(Australia, New Zealand) A shop, usually operated by a charity, to which new or used goods are donated, for sale at a low price.

Or, as the Urban Dictionary puts it even more poignantly and pungently:

A store with a peculiar odour created by the used clothing and household items within.

Fabulous for unique fashion finds, or curiosities for the kitchen that are not to be found in your general retail outlet. Unfortunately, these treasures are few and far between, and can only be found by rummaging. Once a treasure is discovered, it boosts one’s endorphin levels, thus creating euphoria which can last for hours or days, depending on the perceived value of the find (and relative purchase price). Repeat discoveries of this nature will lead to the addiction of op shopping.