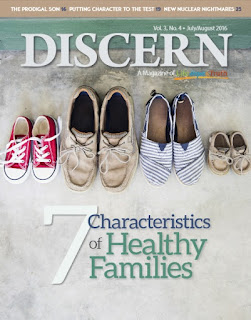 Break out the milk and cookies, the latest edition of COGWA's not-a-magazine magazine, Discern, is its "happy families" issue.

Happy families? That's always been part of a wholesome PR that goes way back to the seventies, and doubtless beyond that. If you want to know how to break free of the real world, flesh and blood pains and ambiguities of marriage and parenting, do we have good news. Our experts (hack writers) can lead you into the all-American stereotype. Families with flashing white teeth, smiles, the embodiment of niceness and compliance.

Which makes it difficult to explain why so many church kids ditch the whole enterprise just as soon as they're free to walk out the door.

Having said that, there's probably some good advice in this issue. The problem is that good advice is hardly as useful as good example, and how are you going to raise strong, independent, autonomous kids when Mummy and Daddy are doormats to a controlling, high demand sect that tells them what to think?

This edition begins with sagacious advice from the editor, Clyde Kilough. Is Clyde a control freak? I've no idea, but there are a few folk from his days as Beloved Leader at UCG who probably have a well-formed opinion. Becky Sweat has the cover article, 7 Characteristics of Healthy Families. Amazing how that number seven keeps turning up when COG writers want to make a list. It's all very nice, but also somewhat trite (e.g. number 1: A deep commitment to one another).

David Treybig writes on lessons he learned from his parents. Again, there's nothing wrong with what he offers, but it's also fairly platitudinous (e.g. work hard). You might not be surprised to find that "encourage critical thinking" gets missed from the list. At least Dave didn't try to pad it out to the biblical seven. My reaction to number one is a bit jaundiced: "loving authority". Did you say authority?


If  the  Creator  God,  the  being  with  the  most  authority in the universe, can take the time to educate grown-ups on the consequences of their actions, shouldn’t parents do the same for their children?

Now, see, there's the problem Dave, starting with the word 'if' and then moving on to Sky Father imagery. Not that Dave would have a clue what I'm talking about I guess.

Mike Bennett ties in happy families with Sabbath keeping. Sounding semi-enlightened Mike proclaims "The Sabbath was made for man - and families." Maybe he's been dusting off one of the old Bacchiocchi titles. Treybig is back with a piece on the prodigal son parable. It has "overlooked meaning" apparently, so we're all very lucky that Dave can set us straight, courtesy of ten minutes skimming through the Expositor's Bible Commentary.

Jeremy Lallier writes about Putting Character to the Test, based on another parable, the good Samaritan. Then, wouldn't you know it, Mike Bennett is back with the encouraging news that "You can become a Saint!" (in the sense that all Christians are saints). But shouldn't that be you are a Saint?

So far, so vitamin-fortified, family-friendly biblical, but where's the precious (should that be precocious) prophecy? Fear not little flock, Neal Hogberg to the rescue with "New Nuclear Nightmares." Neal rarks up the fear factor, which is, let's face it, the tried and true strategy that has brought home the kosher bacon for COG sects since before the Radio Church of God launched in the 1930s.

Is there more? Erik Jones asks What Did and Didn't Jesus Look Like? (Hint: he had short hair. Yep, I'm as surprised as you aren't.)

No issue of Discern would be complete without a contribution from Joel Meeker. Joel plays on his experience as an amateur archaeologist with a one-page column on the joys of shifting dirt at Armageddon. I'm sure, once he'd finished, he uttered the words "Armageddon outa here!"

You can't read a hard copy issue because it seems COGWA does this on the cheap as a download only. The link at the top will take you to a page where you can do just that. Knock yourself out.

Nothing wrecks a family like being in a cult.

The truth is the CoGWA is a cult (as are all the sects of the Cult of Herbert Armstrong Mafia) -- and being a member of a cult means that your time, effort, energy and resources are going to be wasted on the cult -- particularly the cult leaders. That means that the family suffers while it sacrifices its needed resources so the leaders of the cult can prosper and live the lives they want to live while the family goes without to satisfy the lusts of abject strangers who simply don't care about those making the sacrifices.