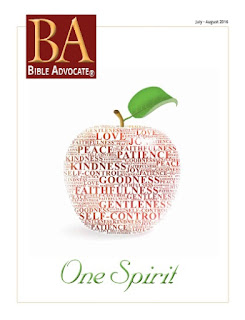 I'm conflicted about the Bible Advocate. Years ago - we're talking the early 1980s - I was a hard copy subscriber. If nothing else it proved to me in my traumatized post-WCG state that a kinder, more generous form of COGism did indeed exist out there, albeit relatively small and distant. I still check out the magazine, though these days only online. It's not exactly riveting reading, especially for folk raised on the decadent triple-chocolate prophetic confections promoted by the mad-as-a-meat-axe Armstrong wing of the movement. The BA - published by the Church of God (Seventh Day) - is more like home made vanilla bread pudding. No artery-clogging additives, and "way healthier".

So why conflicted? Well, it's still a fundamentalist magazine, and for some of us that's now a very far country indeed. But it's not so "in your face", and gentler in tone than it's off-the-wall rivals. It's detractors in the shards of Herbal Empire might label it "Protestant", though I would question that ... who the heck knows what "Protestant" even means these days. Evangelical? Well, kind of, in an irregular sense.

The first thing that struck me about the July/August issue was the number of women contributors - Scott Ashley would have a hernia. The staff box lists a number of women too, including Associate Editor Sherri Langton. Fancy that.

The second thing that strikes an ex-WCG/LCG/UCG/PCG/whateverCG member is the absence of prophetic bullroaring. These folk actually know better. Compared to Beyond Today or Tomorrow's World the BA is positive, up-building and encouraging. If you're addicted to circus acts, you'll need to find an Armstrong periodical.

One item caught my eye in particular; a letter on the Questions & Answers page which asked: "Is the Holy Spirit a force or a person? What does CoG7 teach about the Spirit of God?" Interesting response.

Nevertheless, it is not a venue which holds any attraction for the Armstrongists: It is far too Jesus oriented and, as you say, lacks the exciting hyperbole of manic false prophecies replete with the destruction of modern society including, but not restricted to, the United States of America and the British Commonwealth. It should also be noted that the CoG7D has officially denied British Israelism.

The perversity of CoHAM is a profound addiction (and as James at the Painful Truth opines, a mental illness) which the CoG7D cannot feed and is not an effective substitute because the Armstrongists simply want to continue to wallow in their perversity, even though, for the most part, a broad majority of the doctrines of the CoG7D are such that they are indistinguishable for Armstrongism, including the Lord's Supper Service replete with the taking of the unleavened bread, the fruit of the vine and the footwashing.

What DOES set the CoG7D is that it has little appeal for alcoholics, which is totally unacceptable for the boozers of the CoHAM. No Feast of Tabernacles, no excessive boozing and no Armstrongists. Alcoholism in Armstrongism has much more impact than you might be willing to believe or accept. Herbert Armstrong was an alcoholic boozer and set the tone for the social order of his cult -- and may have set the tone for his rebellion from the fold. Never discount the addiction of an alcoholic.

There were times when it could get rather edgy. I remember reading an article in there that was highly critical of actions by the Israeli government. That was included to balance out a more pro-Zionist article.