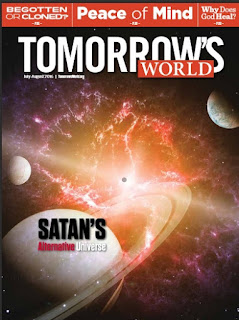 You've got to give the LCG credit for a catchy title. The July/August issue of Tomorrow's World is themed around the title Satan's Alternative Universe. The world, as LCG brethren know, is a scary, upsetting place full of gun control advocates, gays, liberals, people with swarthy skin tones and Bible scoffers. To quote the Richard Ames editorial: "Truly, for those who are not responsive to Jesus Christ, our present world is descending further and further into outright evil, with the widespread conscious rejection of all that was once held as sacred by those who profess Christ." Verily, verily. Bring back the 1940s!

And wouldn't you know it, Rod Meredith has written the feature article on this very problem.


Very few people understand the significance of the massive changes underway in our entire society. Not since the time of Sodom and Gomorrah have people generally been as confused in so many ways. This is especially so right now because of the massive misuse of technology. By gaining almost total control of the media, a very real Satan the Devil is able to “manipulate” the thinking, the attitudes and the actions of billions of human beings - especially the younger generation.

Poor old Rod, the devil is making 'em do it. The wicked liberal media, the "wet behind the ears" younger folk (for Rod that's probably anyone under fifty). The world is going to hell in a handcart. Things just ain't normal anymore.

Ames is back with an article entitled Seven Keys for Peace of Mind. Fancy that, what with seven being a "biblical number" and all. Key One? "Take Part in the Great Commission." Excellent, that's the trick, send in your tithes without delay!

In the London Calling column by one Simon R.D. Roberts you might expect something on the Brexit issue, but the LCG missed the bus on this as much as their UCG brethren. Simon writes about Dolly the sheep instead.

Rod McNair has a major article on Why Does God Heal? Perhaps a more appropriate question would be "why does God not heal?" given the LCG's obvious misrepresentation of this whole issue. Indeed, you could make an argument that, when it comes to divine blessings, the Eternal has massively underfunded his LCG operation. In fact, Rod the Lesser seems to be intent on building a wall of qualifications and - of course - it's the dullard members who are really to blame.


Do you need divine healing? If you do, be sure not to blame God. Instead, look to Him with gratitude for His whole plan, knowing that He can and does bring about His will in your life, as you look to Him with faith and obedience.

Translation: suck it up.

Douglas Winnail has been skimming Karen Armstrong's writings on the Axial Age and he isn't happy. Thankfully Dougie is here to put a COGish spin on it.


In stark contrast to the spirit of the Axial Age that looked to human reason, the Bible warns us to “lean not on your own understanding” (Proverbs 3:5). Scholars of comparative religion may speculate that God was revealing universal truths during the Axial Age to thinkers searching for answers within their own minds, but the Scriptures state that the Word of God is the source of truth (Psalm 119:142, 160; John 17:17).

There, so no need to worry about those silly scholars of comparative religion when you have handy, dandy proof texts to offer.

There's more in the minor features, but that's probably enough to give a feel for this issue.

The Bible is the only book that can be true because it declares itself true. Who would put up with such concept in any other discipline? Of course, the Bible is not true on many topics and belief that it is does not equate with real knowledge about the topics it claims the last word on.

I believe the world is becoming a more dangerous place. But how would LCG reshape society? Would it be an Armstrongite theocracy with all the autocracy, class consciousness, foibles and flaws. While Armstrongites have always been fervent about criticizing the larger society, they have always admitted that they do not have solutions - only the Kingdom of God can bring the answers. It would seem like this would bring about some humility. But they have always taken the GTA approach of loud and obnoxious glibness. I think they believe this is the power of the spirit when it is simply the megaphone of avarice as they seek a larger tithe base. Sort of a Donald Trump alarmist approach. Recruit people by nurturing their fears and hatreds.

This is getting repetitive isn't it.

The LCG is pure evil!

In a .pdf (or in a flip book for that matter), each article should be complete and you SHOULD NOT HAVE TO SKIP TO ANOTHER PAGE TO FINISH THE ARTICLE!!!!!

But if those who produce this drivel are too lazy and incompetent to keep the articles together, AT LEAST PROVIDE A LINK TO TAKE YOU RIGHT TO THE CONTINUATION!!!!

And for "continued from" a link should take you back!!!

In the colorized flip books for the first three Ambassador Report magazines on line, that's how it works.

OK. It's checked. We're good to go. No need to worry about format and the frustration of potential readers! We've done our part! We don't have to be considerate: After all, we as God's servants have done the minimum to get by, so we're done!

What a survivor Meredith is!
I'm looking at old 1951 GN - good-news.wwcg-archives.com,
he has been writing the same stuff for 65 years!

In his piece, Winnail does not offer a fair assessment on the origins of Judaism
(ignoring its own patent eclecticism)(is this the academic standard at Living U?)

Living U would, of course, consider Embarrassing College to be the epitome, the zenith, of academic standard! Need we say more? They would love to be seen as Ambassador College, Jr., ie, the legend.