Real or Knockoff? The Pack magazine. 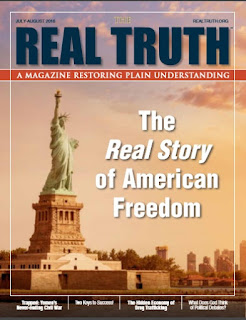 David Crowl Pack's The Real Truth mag reminds me - more than any of the others on offer - of The Plain Truth which arrived in the family letterbox when I was a teenager. There's a certain nostalgia in the layout, the fonts, even the graphics that take me back to 1970 or thereabouts.

Which is no surprise really. Pack apes "the Work" as it once was. He's not smart enough to realize that time moves on, and the gold standard for the PT in the seventies rapidly evolved by the time Herb Armstrong passed on to his eternal reward. If you're in your thirties, forties or even fifties, the trick won't work nearly as well, but if you're just a tad older you might well do a double take. It's as if time has stood still - only the bylines have changed.

For a start there are those long 'personals' from the editor. In Two Keys to Success! we learn about Dave's Uncle Frank who embodied the first key; out-thinking those who get in your way. The second key is perseverance. Wow, never would have thought of that by myself. 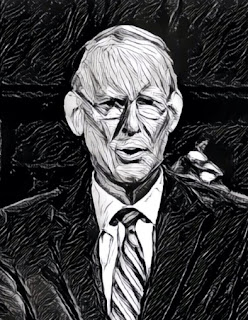 The cover story is The Real Story of American Freedom in which Ryan L. Caswell asks "Why is America Different?" Guess what? It's all to do with British Israelism.

Edward L. Winkfield writes about "The Hidden Economy of Drug Trafficking", while someone without a name opines on "What does God Think of Political Debates?" It must be nice to have the inside track on what God thinks about things that never existed in Bible times. David J. Litavsky is the designated expert on the Yemini civil war, and Packatollah Dave returns with "What is the Unpardonable Sin?"

Full page ads promote a reprint article (remember those?) titled Are You Being Called? (unlikely if you're reading The Real Truth), a booklet called You Can Build a Happy Marriage (run, run like the wind, and don't look back! Dave is the guy who said in a sermon "you don't have a voice woman") and on the back page Dave's slavish rewrite of America and Britain in Prophecy.

It's like stepping into a time machine and arriving forty plus years in the past. Unlike Discern and the unlamented Vision, you can apparently get The Real Truth in print form, though with Dave juggling those nasty bills who knows how much longer that will continue. Alternately you can download the issue from here.

"Out thinking those that get in your way." Classic Dave. However, Dave is not near as intelligent as he is clever and often his clever gets in the way of common sense and bites him in the bum as with his 2013 "prophecy" that all the COGs would be a runnin' back to him. Dave is a copier and not an innovator. In his recent series on why Evolution is wrong and Creationism is the truth of his perverse views of science badly done, Dave went back to long ago disproved ideas about the Archer fish, Anableps and whales, to prove his creationist points. Those of course were the main examples used by GTA n his "Whale of a Tale" and "A Theory for the Birds" anti-evolution "proofs". One can wince often at Dave's ignorance on such things as AronRa took him apart for his series, point by point and made a fool out of his presentation. COG ministers need to be very careful in this day and age into straying into areas of which they know precious little and are subject to pubic scrutiny. Forever more those who think Dave knew what he was talking about in disproving evolution , these rebuttals, brilliantly done, will follow his series wherever they pop up. AronRa is interviewing me this weekend for an hour on his program and I look forward to discussing my WCG/ministry experience and other topics such as Biblical contradictions and other issues.

There's a poetic irony in Pack & Flurry's slavish copying of the king of plagiarists.

Wow, this is the best of the PT clones, a perfect emulation of the glossy PT c.1968!
An anachronism, or "anAKRONism" coming from Wadsworth just outside rust-belt Akron.

All the clone magazines and others like JW Awake have increasing secular article content to appeal to Gen X,Y. But it's not working; there's no growth or money to be made in X'tianity any more. Like the rust-belt city, their business-model has seen better days.

Well, now, to give credit where credit is due: REAL TRUTH managing editor Edward L. Winkfield's article on the drug trade is a super good piece. This level of quality is the quintessence of "little flock" RCG's extraordinary collectivist pooling of wealth. How it furthers the propagation of the Armstrong gospel is hard to fathom. But like the contemporary J.W. AWAKE magazine (also free), they must create a milder quasi-secular image, toned-down from their rabid apocalyptic origins.

I see the JWs, like WCG, sold most of their Brooklyn NY HQ campus for a "billion dollars"(NY Times) and also moved to cheap land in the rust-belt (Wallkill NY)!

Super Dave has managed to turn his headquarters into a hive of drones.