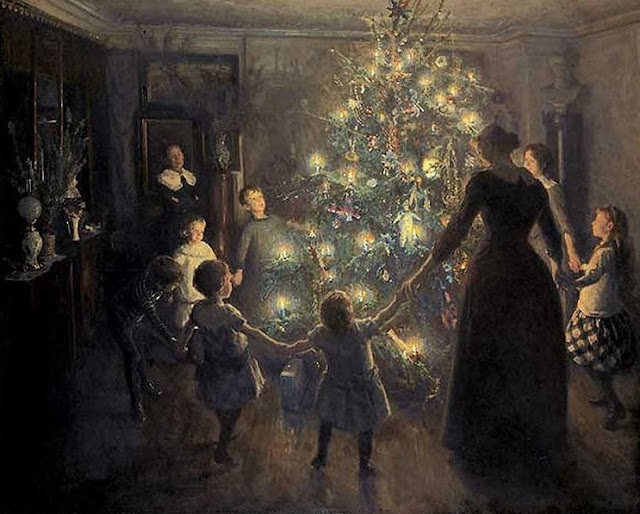 If you were ever a member of the old Worldwide Church of God (or one of its offshoots) you know about the Christmas tree passage in Jeremiah 10. I certainly had it underlined and highlighted in my wide-margin KJV from that era.

"For the customs of the people are vain: for one cutteth a tree out of the forest, the work of the hands of the workman, with the axe. They deck it with silver and with gold; they fasten it with nails and with hammers, that it move not." (Jeremiah 10:3-4)

Clearly a precursor to the tinsel-decorated Christmas tree. As verse 2 thunders, "Learn not the way of the heathen".

How clear could it be? Well, maybe not as clear as we thought. The Remythologized blog has an entry called "No, Jeremiah 10 isn't a Christmas Tree." The writer finds textual reasons to show that the word 'workman' (he translates it as 'craftsman') refers to an idol maker. The passage is about a wooden idol, not a decorated tree.

The argument goes further than this though.

"Does it really make sense to argue that Christians should not make use of symbols with pagan origins or associations when Christians are either: a) totally unaware of a symbol’s history, or b) using the symbol with no pagan (or completely different) intentions? My problem with the Hebrew roots movement [he could have sad Churches of God] is that the standard of purity it uses to beat up Christian holidays and symbols cannot even be applied to the Bible. I’ll give you some examples:

"John uses a snake as a symbol for Jesus (John 3:14); it is well known that many of the Biblical proverbs have Egyptian origins and influences (If you don’t believe this you simply haven’t ever picked up an academic commentary on Proverbs.); Psalm 104 is very reminiscent of an earlier hymn to Aten; Psalm 29 seems to be modeled after Baal texts (for example); both Jesus and YHWH are given the Baal’s deity title “cloud-rider” in both testaments... or consider that the book of Revelation is crawling with Greco-Roman astrology. (Ever read Revelation 12?)

"What examples like these show is that symbols are not magically evil. John uses a snake to represent Jesus and it’s totally kosher in his mind. We talk about Jesus “riding on the clouds” and it’s not an issue that this was a title that originally belonged to Baal. The history of a symbol or its uses in pagan contexts doesn’t make it evil or unusable by Christians, it’s the intention behind the symbol that makes it good or bad."

All of which seems sage advice to me.

Email ThisBlogThis!Share to TwitterShare to FacebookShare to Pinterest
Labels: Xmas

Verse 5, "their idols cannot speak." These folks were using their decorated trees as an idol. I don't know of any Christians who do that with their Christmas trees. Here is another example of reading more into a passage than you should.

Armstrongism used the principle of being held accountable for something for which it would be impossible to have had any knowledge in several areas of its theology. In addition to long lost and "sinful" elements of paganism, it was applied to the long lost culture of the so-called Israelites, leading into the national punishments of English-speaking nations. This was all part of an amalgam of special and exclusive Armstrongist "gnosticism", used to "warn" the world.