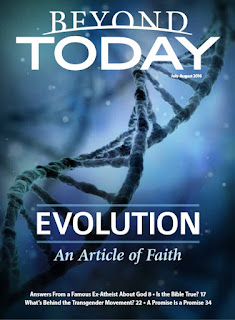 If you were expecting a dedicated Brexit issue of Beyond Today (formerly The Good News) for July/August, you're going to be disappointed. Instead its the tired old sawhorse, evolution. It seems the lads, all keen and bushy-tailed prophecy pundits, were asleep at the wheel, or - just like the Brits - didn't see it coming in time for the mag's release. Who'd have thunked they'd drop the ball on the biggest story of the year thus far?

In fact there's an anti-science whine throughout the issue. Even editor Scott Ashley manages to take a swipe at "the futility of Darwin's theory of evolution" while pouting about the parlous state of public "bathroom" signs. He's talking about toilets of course (why a euphemism like "bathroom" is used so commonly in the US is beyond me).

Mike Kelley kicks off in earnest with Evolution: An Article of Faith. What brilliant qualifications does Mike bring to this topic - other than being an in-house hack? No, I don't know either. Mike is immediately followed by Mario Seiglie who has a track record for writing this kind of guff with Answers from a Famous ex-Atheist about God. The person he's referring to is Anthony Flew who, at a ripe old age, did indeed change his mind. That's notable mainly because it's so unusual.

Then - holy guacamole Batman! - there's an article by a female writer. Scott, are you trying to make a point here? Anyway, Kayleen Schreiber is working on her PhD in neuroscience. Other than that we don't know much about Kayleen. Where is she studying? Is she a UCG member or some kind of generic fundamentalist? Scott clearly thinks you don't need to know. If you're expecting hard science here, think again. Snippet: "God made the physical world so wonderfully complicated that we will be studying it until Jesus Christ returns!"

Just when you thought you might escape from all this creationist drivel, along comes Dan Dowd with An Evolutionary Fantasy: Useless Body Parts.

Now you can relax and let out a short sigh of relief. But not for long as the next article up is Darris McNeely's Is the Bible True? Just what do you mean "true" Darris? As expected Darris takes a broad brush to the question and ends up painting the carpet. "Proof 1", in case you're in any doubt, is "fulfilled prophecy."

Next up it's the World News and Prophecy section. Brexit? What's that? To be fair, there are a couple of dumb references to BoJo the Clown (in an piece about German Leopard tanks):


“The European Union is pursuing a similar goal to Hitler in trying to create a powerful superstate, Boris Johnson says . . . He warns that while bureaucrats in Brussels are using ‘different methods’ from the Nazi dictator, they share the aim of unifying Europe under one ‘authority.’ . . . “The former mayor of London, who is a keen classical scholar, argues that the past 2,000 years of European history have been characterized by repeated attempts to unify Europe under a single government in order to recover the continent’s lost ‘golden age’ under the Romans” (Tim Ross, “Boris Johnson: The EU Wants a Superstate, Just as Hitler Did,” May 15, 2016).

Beyond Today lapped it up. The authors (in the original Telegraph article) also mention that the reference to Hitler is "potentially inflammatory". You think?

Back to the toilet bowl with Tom Robinson sticking his head as far down as he can with an article entitled What's Behind the Transgender Movement? (You'll be as alarmed to know as I am that "bathrooms are just the beginning".) Behind? Movement? Sorry, just my scatological sense of the bizarre.

But wait. Tucked away toward the back of the mag is an article by Milan Bizic (that doesn't sound a very British name does it?) called What Made Britain Great? I looked to see if he mentioned the East India Company or colonial adventurism... but no.

On to a cherry-picked assortment of letters, then John LaBissoniere wrenches out as much significance as he can from the daily chore of washing the dishes.

Egad! Can our eyes be deceiving us? Another article by a female writer. Janet Treadway on Visiting Widows and Widowers in their Affliction. Obviously the drought has broken, even if it's left Scott a gibbering mess in the editorial room.

Robin Webber burbles on about something or other in A Promise is a Promise, and then somebody - perhaps Robin or maybe someone who isn't high-up enough on the totem pole to merit a byline - gets to write a feature entitled How Can You Correctly Understand God's Prophecies and Promises? Quote: "One awesome proof that the Bible is divinely inspired is its perfect harmony and consistency all the way through..." Has this guy actually ever read the Bible?

TV log, back page. Collapse over a coffee and take a moment to feel thankful that this is all a nightmare from the fundamentalist past. Once you've polished off the coffee and peanut brownies, take a drive down the newsstand and pick up copies of National Geographic and New Scientist. You're going to want to flush (ahem) this stuff out of your head as quickly as possible.

The non-experts at Beyond Today best not come into the cross hairs of Anron Ra as Dave Pack did recently and had his butt handed him by someone who actually knew how to explain Evolution well and refute the bogus arguments of Dave Pack.

I thought this might have been Kay Schreiber, wife of UCG pastor Randy Schreiber, but it isn't. See link.

I used to be in the "evolution is flawed" camp but changed my mind. The watershed event for me was reading Dr. Francis Collins' book "The Language of God." Collins is a doctor, a geneticist, a Christian and the Director of the National Institutes of Health. Collins points out that all living things on earth are genetically connected. We share a certain percentage of our genome with the genome of bananas. The concept that all fauna and flora developed via evolution from a single original primordial genome is supported.

For me, and maybe for the Beyond Today writers, the problem was that all the great diversity and complexity of life on earth seems to be beyond the capabilities of random mutation and natural selection. But guided and managed mutation is much more plausible and still uses evolution as the mechanism for development.

But in part, my view back then, was valid. The scope of my belief was just too broad. I concluded that evolution was an inadequate explanation for the existence of all fauna and flora. Actually, it is only inadequate as an explanation for the human mind. Dr. Thomas Nagel, in a recent book entitled "Mind & Cosmos: Why the Materialist Neo-Darwinian Conception of Nature is Almost Certainly False" supports this view of the inadequacy of evolution and reductionism. Nagel is a professor at NYU in the department of philosophy. Nagel is also an atheist. He does not support the idea that God created the human mind, he just knows that evolution didn't. He argues for a better explanation.

That, briefly, is my own personal journey and I believe that the writers of Beyond Today are caught in a time warp. But it is comfortable there. You do not have to deal with hard issues concerning what is allegory and what is not in the Bible. Disbelieving evolution is not for the faithful man but for the lazy man.

I think science is solving the problem of the human mind too.
I saw the latest pictures of the intricate network of our brain.
Far more complex than computers.

We are the only species that is able to project images of past and future events and feelings in our brain.

For example when a dog has a broken leg with 20 iron nails in it, the moment its sees a cat it starts chasing the cat because the dog is incapable to project an image of the future pain it will endure because of its movemement to chase the cat.

Humans have far more connections and are thus able to project that image.

Even if science understands the brain and the mind a 100% still religion will have the last word by stating that science is correct in having desected our means of connecting with God.
Like with Galileo the argument was not about the science at all. The argument in the court was about the authority to declare it and the limitation of the freedom to irritate the powers that be.

I was surprised, given the issue, you didn't use these quotes from Dr. Collins' book:

"Evolution, as a mechanism can be and must be true." P107

"Truly, it can be said that not only biology but medicine would be impossible to understand without the theory of evolution." P133

For me, I can happily countenance the evolution/ID paradox.
Not seeing mutations as a sufficient motivational feedback loop for innovation.
For instance RNA codons have redundancy for amino acids to guard against mutations.
And RNA has 'start' and 'stop' bytes (for proteins) - like latest tech serial digital bitstreams!

To elaborate on what I wrote about the engine of mutation/natural selection, there are many scientists who don't believe there has been enough geologic time for the small rate of beneficial mutations to account for the great diversity of flora and fauna in existence currently and over past epochs. This is why I think guided and managed evolution is more plausible. But most theistic evolutionists seem to believe in a random process.