Orlando - and the COG predicament 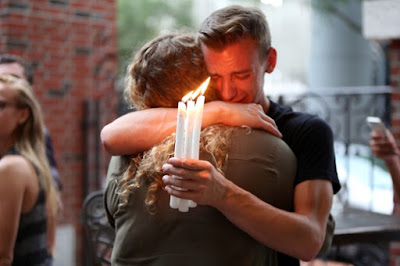 Forty-nine innocent lives lost in a Florida nightclub. Young people in their twenties and thirties. Shades of the Paris concert that was targeted by Islamic terrorists at the Bataclan last November. It's ideal fodder for the usual anti-foreign discourse that energises the conservative COG ministry. The fact that it happened on American soil could only add to the paranoia that groups like the PCG seek to exploit.

But there's a problem isn't there? Those victims were overwhelmingly part of the Gay and Lesbian community. The nightclub was a well-known gay venue. The alternate COG meme is that God is punishing countries like America - perhaps especially America - for its moral failings. In the fundamentalist mindset, which the COGs share, there's no moral failing worse than same-sex relationships.

So what to do about Pulse?

It was with great interest that I read Melvin Rhodes' take on the events. Mel is COG to the core, conservative to the core, a respected commentator within the UCG. You can read his piece here.

Clearly Mel is treading on eggshells. He doesn't want to appear unsympathetic, but on the other hand, the victims were gay, practicing a lifestyle that Mel abhors and - in his mind - God abhors.

His blog entry is called "HATE WILL NEVER WIN". It's a good start.

But Mel launches a backhander. Hate is winning. Next, he slaps down a BBC correspondent who tries to put the focus on the problem of hatred of gay people. No, Mel isn't buying that. The problem must be Islam.

I'm guessing Mel has never read the unexpurgated text of The Arabian Nights (that'd curl his toes). I'm guessing he wouldn't know about the poet Rumi, the 13th-century Persian jurist, Islamic scholar, theologian, and Sufi mystic (and his male lover Shams). Islamic culture has always found a place for gay people, just as Catholic culture in the Middle Ages did. Fundamentalists and fanatics are the problem, fearful, threatened and feral, they've undeniably been in the ascendancy in Islam for the past century. I wonder if Mel has ever considered the reasons for that regression within this time frame. Probably not.

Next Mel launches into his "Islamic scholar" impersonation by citing some Quranic proof texts. This is, of course, how Mel reads his Bible, so I suppose we'll have to simply smile tolerantly. The Quran has as many interpretations as the Torah, and we know how the rabbis argued over interpretations and minutiae. Islam breathes a similar atmosphere. You can certainly proof text horror out of the Quran, but that's hardly unique to this holy book.

Then we're off on an anti "liberal media", I-hate-the-BBC rant. Could this tragic event be in significant part a gun control issue? Oh goodness no!


"Predictably, the liberal media, including the BBC, said that the attack once again raised the issue of gun control. This may be the case in Washington, DC, but the only “gun control” discussed in America’s heartland is the need for everybody to be opposed – increasing fear means there is a greater need for guns! A few hours after the mass shooting, somebody came up to me before a church service and asked what I thought about people bringing guns to church. The attack on the gay nightclub could just as easily have taken place at a Christian church – dozens of churches have been attacked by Islamists in the Middle East and Pakistan."

Does Mel remember a tragic church shooting in 2005? The killer was Terry Ratzmann, a member of the Living Church of God. The venue was an LCG Sabbath service. It made news around the world. And now he thinks it's an okay thing for COG members to bring their guns to services? Ratzmann wasn't Muslim, he was one of LCG's own, even known and liked as far away as New Zealand where he'd previously kept the Feast of Tabernacles.

Back to the old "liberal media" chestnut. They're all apparently in denial about the real issues. Then again, Mel, maybe they're just a damn sight more analytical and less prone to jumping to conclusions and running off after red herrings and glib talking points.

And on we go. Mel relates listening to a youth-oriented sermon with his granddaughters in which the preacher (and we're almost certainly talking about an accredited UCG pastor) stated that "Jesus would never have mixed with gay people".

To his credit, Mel disagrees... "Rather, the gospels show us that Jesus mixed with “publicans and sinners,” including prostitutes. Jesus said: “They that are whole need not a physician, but they that are sick.” (Matthew 9:12)."

Next Mel notes that homosexuality is listed along with adultery and idolatry in 1Cor. 6:9-10. He writes: "It should be noted, here, that the Apostle Paul treated all three sexual sins equally. The Greek shows that the three sins listed all involve penetration."

Leaving aside the claim that "the Greek shows" (sounds impressive, but does Mel really read Koine?), let's think this through. Two guys cuddling up in a nightclub is okay - no penetration. Oral sex in whatever combination is okay, no penetration. Wasn't that the Clinton defense? Is this what Mel means? No, I didn't think so either.

And to state the obvious, if every UCG minister with a history of adultery were to resign tomorrow, there'd be an awful lot of empty pulpits this upcoming Sabbath.

I don't want to even go near the issue of what the Bible says - and doesn't say - about gay people. I do wonder, though, if Mel has any gay relatives (hey, I do, and they're "just folks"). I do wonder if Mel is aware of the struggle (in some cases leading to suicide) young gay and lesbian people have who have been raised in the COGs - including children of high-ranking ministers and at least one evangelist. I also wonder if he's ever bothered to visit Troy Fitzgerald's Secular Safe House (Troy is the son of a WCG minister).

Anti-gay rhetoric is a familiar theme in the COGs, particularly exemplified by the spiteful prose of Roderick Meredith. A half-hearted, on-the-fence response to the shootings in Orlando, fused with the usual conservative "talking points", misses an opportunity to actually say something meaningful.

The irony is that Mel's response will probably be one of the less unbalanced ones to come from COG sources.

(Two further takes on the COGs and the Orlando killings can be found on Living Armstrongism and Lonnie Hendrix's blog.)

NOTE: Melvin Rhodes has posted a follow-up to the blog column discussed above in which he responds to some of my comments. You can read it here. He states that he does not support gun carrying in churches, nor support Trump over Clinton. It's good to get the clarification. I'd only note that these positions could be easily implied from his earlier blog piece. Mel is too experienced as a journo, surely, not to know that.

Email ThisBlogThis!Share to TwitterShare to FacebookShare to Pinterest
Labels: UCG

It appears that the shooting was a result of anger (the same as in the Terry Ratzmann murders and those of Chuck Harris).

The Churches of God need to begin addressing both the anger in their churches and the alcoholism.

When they get those under control and begin to set some sort of example, then they might have some credibility to make comments (as long as they also eliminate lies, deceptions, arrogance and hubris).

They have quite a laundry list of problems to resolve and until they do, they should remain silent about the problems of the 'world'.

Human sexuality seems more something on sliding scale in reality than all male or all female. It is the religious programming that seems to define the non existent clear cutness with healthy doses of fear , guilt and shame to keep the mind under its control. The New Testament is a book written by single men who claim to be experts on everything from childrearing to marriage and male/female relationships . Seems a bit out of focus to me. Jesus who it seems was never married and not even around very long in a normal life of relationships gets to set the standards on such things quoting a Father who never seems to have had any relationship but one with a young underage virgin Middle Eastern girl and then just briefly and using his third member of himself to do the job. Weird. lol. Let's not even think the Apostle Paul had good or healthy view of relationships.

Jihadists have a reaction pattern that is off the scale, as evidenced by suicide or homicide bombings. I believe what we are seeing in Orlando is the result of a jihadist discovering something about himself that is totally anathema to his belief system, his reaction to this, and his attempt to take it out on the organized culture which caters to people of his orientation. He probably never imagined that the inner workings of his mind would become public knowledge following the attack and his death. Most likely, he assumed that the magnitude of his actions would mask his sexuality, if he even thought that far ahead.


Building on Christian mythology, ISLAM is very explicit on horror of HELL and the difficultly of avoiding it:

Well established conservative Hadiths give a legalistic pathway for 'flawed' followers to avoid either partial time, or eternity there:

The way is by Jihad, taking out X number of 'Infidels' as you go down - and this is important - in Martyrdom. Thus the key phase for the Orlando Believer is the final - and I mean FINAL - firefight with the S.W.A.T. team.


Similar, IMO, to the Orlando Gunman was the pilot of EgyptAir Flt.990:
He was about to be fired for sexual failings contra his employer & Faith:
Perhaps he saw a short-cut to Paradise by killing 100 Americans['Infidels']
- and going down a Martyr himself in the process.

In 2015, Jamaican cleric, Abdullah al-Faisal, told his followers that killing is the only sure way for sinning Muslims to avoid Hell: "Some people are so sinful, after living in Dar ul-Harb (the West) for many years, the only way they can go to Paradise is for them to die on the battlefield fighting for Allah. When you go to the battlefield and you kill the kuffar (non-Muslims), they shall take your place in the hellfire."