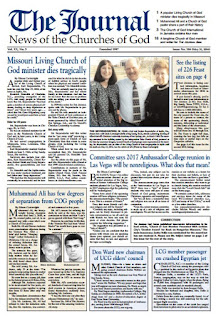 The May 31 issue of The Journal: News of the Churches of God has been released. Some highlights.


The PDF is available to download. Past issues of The Journal can also be accessed via the links in the AW sidebar.
Posted by Gavin R at 16:25

So which F.O.T. locations hold the record for the - uneasy - hosting of multiple bickering Herb-COG "Splinters" & "Slivers"?
The "winner" is Branson, Mo with an incredible 5 incompatible & irreconcilable sects!
The Runner-up is Baguio City PI with a no less impressive 3 Herb cults converging.
Coming in third, back in the Bible-belt, is Ozarks/Osage, Mo.

Usually, if you count a 30 mile radius... the Ft. Walton/ Destin area has quite a number as well.

Dying for God's Sake is back up and running, with the same purpose but a slightly different approach, at www.dyingforgod.com

David Havir asks a question in his column:

I read Deuteronomy 18:20, 22, which shows that proclaimers of wrong interpretations were killed in the Old Testament.

Can you imagine how many church leaders would be wiped out if we followed those scriptures?

Oh, if it's Armstrongist ministers, it would be pretty much all of them -- I don't have to imagine.

Wait a minute! Armstrongism holds the G.G. Rupert orientation that if it isn't specifically precluded in the New Testament, everything in the Old Testament has to be kept -- to do otherwise, there could be no feasts and everybody could enjoy oysters (except those allergic to shellfish). No, there's no free pass here! Armstrongists are under the law which means that they must kill off false prophets. By the way, owning some slaves might help on the housework.

Of course, there wouldn't be many ministers left (and certainly no more sermons about British Israelism), but I see that as a plus.

Agreed. Dave Havir seems to be acting in the valence of an exceptionally enlightened Armstrongite minister for the purpose of this and other articles, but perhaps unknowingly, he still has that "except our church" mentality that generally blinds the entire Armstrong movement to the inadequacies of the very "know it all" positions that make them so toxically cultic.

I wonder if G G Rupert's people wore tassels on their garments, and avoided eating at places where both clean and unclean meats were cooked.

By the way, nobody in the ACOGs seems to be placing bets on HWA's prophecy that the Brits will secede or be kicked out of the EU! The vote comes up later in the month, and one would think that all of the aspiring prophets would be weighing in on this in advance. Why would they be holding their tongues on this?

Great to hear your blog is back up Kathleen. I've put it back on the blog roll.

..the Ft. Walton/ Destin area has quite a number as well.

I missed that one, Panama City, an Oktoberfest Babylon of GOG spin-offs!


You doubt if many were killed? How many would you estimate? How many are too many?

I looked up Num 35:30-31. It says nothing about accepting a ransom for any of these offenses. What do you mean it "suggests"?

"A Jewish commentary suggest ...". Who cares - that's not proof nor even evidence. The writers of this commentary were apologists the same as you.

You're clearly reaching my friend. I understand. There's really no way to wriggle out of what your Bible clearly says.

An eye for an eye, clearly indicates just recompense. Not death penalty for a murderer.

Unless you suggest I should start poking peoples eyes out or go on a killing spree for some of the suggested offences.

In that case, good luck with your God, I'm out.
But again I do suggest the option that this higher being meant "just recompense."

The skeptic said, "there is no way to wiggle out what the Bible clearly says." We can know what it says, but do we know what it means? If someone strikes you on the cheek, "turn the other cheek." Jewish commentaries say that this "strike" is not an assault, but rather an "insult." Rather than giving someone the finger, they would take the back of their hand, place it but a few inches from someone's cheek, then touch the cheek. Jesus is saying, "if someone says something hurtful, blow it off." Jesus said that if your eyes are good, your whole body will be full of light" Matt 6:22. Having a "good eye" was a figure of speech that meant being generous. Today Jews who are raising money for a cause might say, "give with a good eye", in other words, please be generous. So, we know what the text clearly says, but we don't always know what it clearly means. Who cares about Jewish commentaries? They probably have a better understanding of their culture and language than the rest of us do. When I teach in Belarus or Tanzania I realized early on that you can't use figures of speech. They don't translate well in another language. Jews can help us understand Scripture better.

Sure, I agree Steve, verses such as the ones you cite are subject to interpretation. But let's not change the subject mid-stream to verses like these.
Many verses are clear by themselves. For example:

"And he that curseth his father, or his mother, shall surely be put to death."

"Ye shall keep the sabbath therefore; for it is holy unto you: every one that defileth it shall surely be put to death"

"If a man also lie with mankind, as he lieth with a woman, both of them have committed an abomination: they shall surely be put to death"

I could go on and on, but I think my point is clear.

You dismiss these verses with " I doubt if many were killed for these capital offences". Well, if they were not killed, then these scriptures were disobeyed.

Your "Numbers 35:30-31 suggests" and "a Jewish commentary suggest" sound like very weak quibbles in face of what these verses actually say. And for emphasis, each verse says SURELY put to death. No wiggle room there my friend.

You reason like the bible is a manual for behavior. Like an Ikea set. Like a computer manual.
That is exactly why we have established institutions for the interpretation of law and its framework. Some believers may sit in seats of legal authority but we should keep the holy books out of our institutions. The very reason for the separation of state and church.

In the end the bible may be right. We all die because we (or Adam) have fallen short.
But it is not upon man to judge that albeit for some third rate countries that still hold to the death penalty because of their atavistic and warlike culture.

I don't need to know what the bible says on capital punishment. Since it must be the same that other cultures have written between the year ...bc and 700 ad.
I can look at you tube what a stoning looks like in Afghanistan.

This stuff must be interpreted or discarded.
Praise the Enlightenment.

I see nothing holy about a book that commands the death penalty for cursing parents, breaking the sabbath and/or being gay. And I see nothing to be gained by trying to rationalize that these verses don't really mean what they say. The bible means what it says and much of it is brutish, primitive, nasty and ungodly.

As you aptly state, the content of the "holy" bible is much the same as the laws, customs and writings of other cultures of the same era. It reflects the morality of the times. It was written by primitive men the same as they were.

Ah I see, you were ironic in being litteral. Just wondering if an internet archeologist can see/read/interpret the irony in the wording some 2000 years from now. Nck

Armstrongism always errs on the side of authority. What if a parent provokes a child to curse him? Who should be stoned then?

Also, who, other than Jesus, never broke a single sabbath?

One of the problems in understanding the law of Moses is that people often have no grounding in the Talmud, which is more or less a record of Jewish case law.