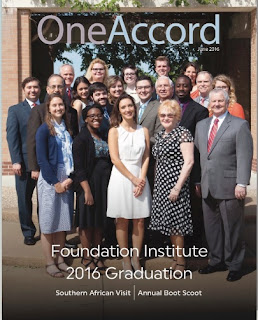 I'm sure you'll be as thrilled as I am to know that the June issue of One Accord, the COGWAddler member mag, is now available. The theme of the issue is the ongoing success of the Foundation Institute, COGWA's version of Living University, or the Ambassador Bible College etc. etc.

I've never worked out why the COGs don't just pack up their budding young ministerial recruits, provide a toothbrush (branded with the church logo) and a generous study allowance, and send them off to a real university to acquire a real degree. It'd certainly be a lot cheaper. But then, I guess, there'd be fewer jobs for the lads in suits, and you never know what crazy ideas the youngsters might pick up without the oversight of salaried enforcers.

But what a pleasure to see the gang lined up for group photos. And my, there's that nice Mister Jeff Caudle, former High Poobah of the UCG in New Zealand. No explanation as to why he was caught up in what seems a very basic program of study, though Jim Franks implies it's because he "recently relocated to the area from New Zealand." That's a reason? Presumably it was felt that he needed to be retreaded to re-enter the ministry. Funnily enough, just yesterday Jeff's name came up in conversation. And yup, there he is, large as life and apparently still keeping (perhaps) one step ahead of the Karma Fairy.

Other matters covered include an article on divorce (I thought Jeff might have written that, but it's by Cecil Maranville), news from local congregations, boot scoots (huh?), ox roasts, Doug Horchak on his excellent adventure in Africa (maybe he'll need remedial classes now too?) and an article by John Columbo on parenting using God as an exemplar... which could be a tad more problematic than John seems to realise.

One Accordian is good. Two Accordians and its OCTOBERFEST!

A magazine dedicated to the sole vehicle of its transportation fleet?