If you're looking for a harlot, LCG, try a mirror 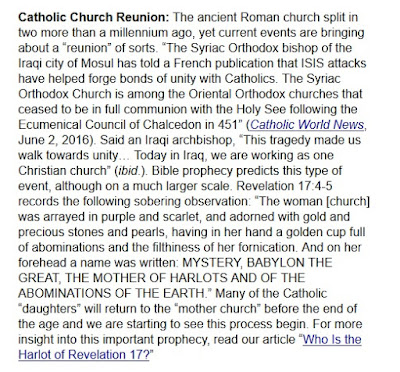 Life is tough in Iraq for Christians. No surprise that there's an increasing sense of common identity across old sectarian divides. Nothing unites people like a common threat. The 'prophecy team' who write for LCG's weekly update seem to have been smoking unverified substances, because they've leapt on this as an example of prophecy in action and a foretaste of a Roman Catholic takeover of other "professing" Christian churches.

LCG has a hard time understanding co-operation between churches. The idea of joining a local ministers' fraternal would probably appall them. Seeing ministers and lay people from different traditions participating together in community groups and charities must be deeply puzzling for these exclusivists who are reluctant to even tell us that they've been having nice little chats with cognate groups like COGWA. That they project this inanity on other denominations says more about them than the churches they're commenting on.

As for the Catholic Church, you'd have to be a moron in a hurry not to recognize the deep problems they face in coming to terms with a rapidly changing world. At least they're attempting to make a transition, which is more than you can say for the 'curia' in LCG's gerontocracy.
Posted by Gavin R at 12:12