PCG: We're the one 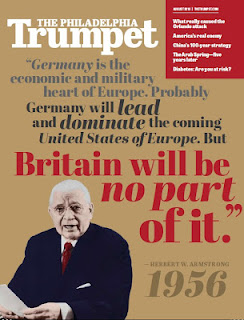 Living Armstrongism has given us an advance peek at the cover of the upcoming (July) Philadelphia Trumpet. No surprise, Gerry, Stephie and the Edmond minions are going to milk Brexit for all it's worth, and then some.

But notice, the emphasis isn't on the searing accuracy of Bible Prophecy. The cover is emphasizing the prophetic gift not of John the Revelator or Dan the Man of lion's den fame, but of... Herb Armstrong. Not that "Bible Prophecy" has a single word to say about Brexit, the EU or any of the other things PCG projects onto the Good Book, but you know what I mean.

So why the Herbolatry? Why not just spread out their favorite proof texts and connect the dots? That's not a Bible quote on the cover, but a carefully selected Herbal snippet. Do they really need to keep genuflecting to the memory of the old one-eyed goat? Well, yes they do, and it says a lot about their growth strategy - or lack thereof.

Who on earth remembers Herb today? Clearly PCG does, along with the most brazen imitators (David Crowl Pack and company), but out there in the wider community Herb is long forgotten. Even UCG is restrained in its references to the so-called apostle.

The reason for the obsequious, idolatrous reverence for Armstrong can be summed up in the word legitimation. Flurry Senior was a very lowly figure in the old WCG. Did Herb even pay much attention to him? PCG has had to spend a lot of time and money demonstrating that Gerry - and only Gerry - has assumed the anointed mantle, despite a total lack of evidence to that effect and given that Herb never passed on to him as much as the steam off the coffee he slurped down on the Day of Atonement. What to do? Prayer rocks, a copycat auditorium, a college emblazoned with the sacred name and reprints of Holy Herbal booklets.

Who are they trying to convince? The big bad outside world that doesn't remember Herb? No. Well, how about ex-members who've been grazing in other pastures - LCG, UCG etc.? While that might seem an obvious conclusion, it seems doubtful. When was the last time you heard of a Meredith devotee jumping the fence into PCG's field? How many UCG members have suddenly seen the light after viewing The Key of David and, shouting loud hosannas as they go, moved into the Edmond orbit?

The Trumpet magazine, the Key of David, KPCG... are all designed to shore up the current membership. Anything else is purely for effect. Suggesting they have any kind of outward focus, even to the wider COG community, is largely wishful thinking. They're there to keep the existing tithe slaves content and focused. The message that gets repeated again and again is that PCG is continuing the work of Herbert Armstrong - so stay put.

But there's change coming. Gerry is an old dude and son Stephen is waiting in the wings. Ikkle Stephie has a dilemma; you can really have only one idol on the altar. When Gerry carks it, who will Stephen choose to venerate in prime position, Daddy or Herbie? Gerry is supposedly "that prophet", but his days are numbered. We can expect the usual florid encomiums when he goes the way of all flesh, but the emphasis will then have to move. You can bet that Stephie has already worked that out and has a trajectory in mind. You can also be pretty sure he hasn't confided in the old man.

Meantime, right now the PCG is staying on message. Gerry and Herb, like fish and chips, inseparable. Convenient in that Herb has been dead for decades and can't do what we know he'd have done to Gerry's pretensions if he'd still been alive. In this issue Herb is dragged out of the publishing morgue to testify to his (and by association PCG's) prophetic brilliance. PCG members will lap it up, but the rest of us will probably just sigh a bit and shake our heads.

"Those who do not remember the past are condemned to repeat it." - George Santayana

Now the various COG ministry will begin beating the drums trying to stir up a fervor for tithes and offerings and self-aggrandization. Wouldn't it be refreshing if when the drum roll begins, the captive followers would remember history, get a clue and just get up and walk out.

No doubt the EU concern will roll off into history and the "sound and fury" coming from the COGs will once again fade out until the next uptick. Armstrongites must be an ahistorical lot (with the exception of the Compendium of World History)and the wisdom of Santayana will go unheeded.

Thanks for the mention.

So these ecstatic proclamations are really for PCG members? Never quite looked at it that way before.

Here's a list of 52 false prophecies made by PCG over the years.
http://livingarmstrongism.blogspot.com/2016/06/52-false-prophecies-by-pcg.html

Greetings, when you speak of, PCG, who are you referring to? Can you please spell out their initials in your article, as there is more than one organization with that name. The Pentecostal Church of God, PCG is one that uses these initials and does not promote, proclaim or believe in Herbert Armstrongs teachings, so please clarify as to which organization that you are referring, and use quotes from legitimate sources to prove your point, as I do not see any, only your opinion. Thank you and have a good day.