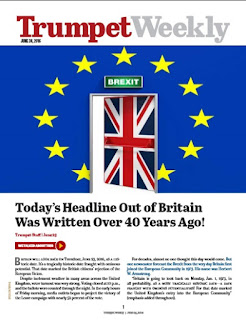 The prophecy pundits are already rattling their tonsils about just how correct their oft-sozzled apostle was (see the cover of the Flurry sect's Trumpet Weekly). The ex-COG commentators are busy responding.

The one comforting thought as Britain shot itself in the foot this week was that stupid prophetic speculation wasn't a factor. A few thousand voters may have been directly influenced by this kind of dispensationalist nonsense, but the size of the winning margin made them totally irrelevant.

While the drama unfolded in the small hours in Europe, those of us half a world away - and lucky enough to have both the time and the technology to do so - could follow events over the course of daylight hours. I monitored BBC coverage (BBC News channel and World Service radio) to start with then moved across to ITV. For light relief I cushioned my disbelief with a panel discussion on Channel 5 once the results were known.

It's increasingly clear that a few old adages are appropriate: (1) be careful what you wish for, and (2) repent at leisure.

Brexit was a project of the far right (think Nigel Farage) appropriated by some of the vilest, self-serving figures in the Conservative Party establishment, think Boris Johnson. David Cameron took on the referendum for purely mercenary political motives and will now go down in history as one of country's worst Prime Ministers.

The reality is that the disadvantaged demographic in England and Wales that fell for the dog-whistle anti-immigration rhetoric - believing the unbelievable promises about prosperity and increased social funding - will now be the first to feel the effects of a downturn that they voted for. Labour was utterly ineffectual - and internally divided - in presenting an alternate, realistic narrative.

And so, what will happen over Gibraltar?

More importantly, what will the effect be of dropping a lighted match on the delicate equilibrium in Northern Ireland?

How will the Scots respond? A version of the Danish enigma (Denmark belongs to the EU but two territories - the Faroe Islands and Greenland - don't) or a fuller independence?

The scary thing is that many British voters simply didn't think through the consequences, and particularly the baby boomers, sucking at the teat of nostalgia and a world that has now passed into history.

I'd be surprised if Johnson is ever elected Prime Minister - though he may be appointed after Cameron - as he has alienated young Brits. As reality hits home to the rest of the community it's unlikely that he'll ever be flavour of the month. He can expect a lot more booing.

I'll add some on the Ulster question.
The Economist commented also.

Wasn't is strange a kid like me could just name Ian Paisley and Anwar Sadat and could fairly accurately describe what they stood for? Outgrowing the blanket underneath the seats during services I came to realize these people were weaved into eschatological predictions that did not come true.

Still those cold war day were strange times, I remember the Ulster/Belfast kids after SEP camp returning to a war zone. Felt sad for them when the autobusses turned right as we hit for London returning to catch our mobility vehicle. Pre Margareth Thatcher era London was a sad place, like a third world country. Can't say that the EC membership years of UK haven't been profitable for all.

Times have surely changed since BBC radio declared during exceptional weather circumstances that there was "Huge Fog in the Channel, Mainland cut off from Britain."

What Armstrong theology does not make allowance for is that business and commerce often transcend religious differences. The church is secondary to the profit motif, and often willingly so, because it also profits from the prosperity engendered by the commerce. In effect, what has prevented World War III is business.

The world would be a much more dangerous place if the EU were to break up, leaving individual nations to pursue their own nationalistic interests. When commerce is dismal, or when nations are excluded from prosperity, citizens become desperate, and seek retribution. Had the victors of World War I not extracted such exhorbitant war reparations from Germany, virtually guaranteeing years of poverty, there most likely would not have been a World War II.

The danger is not a prosperous and powerful secure Europe with the Roman Catholic Church dictating the agenda. It is a divided and impoverished Europe, with no moral compass, and nothing to lose through the disruptions caused by war.

Herbert W. Armstrong was an imperialist and a totalitarian who sought to impose his own will and philosophy on all of humanity. Assuming that all others were of the same mentality, this was the basis for his prophecy mold.

The entire future of the EU is now in doubt. More referendums to leave from other countries are soon to come. It was poorly designed from the beginning, and the seeds of its destruction were there right at the start.

This may lead to a reconstituted EU down the road a number of years from now, but it will have to be of an entirely different nature, and different standards.

As long as the European Union is made up of independent nations with their own elected governments, their problems are going to be essentially local and they will need local solutions. Squeezing them into the same monetary straightjacket has clearly failed and adding a fiscal union just exacerbated an already unsustainable situation. (like Greece)

Governments need flexibility to deal with their own problems. Fiscal union entailed a ballooning of the EU budget – provoking endless bickering among the 27 member states on how to share it out, not to mention the expanded scope for graft and bureaucratic inefficiency. It has been a recipe for gridlock.

Money doesn't talk, it screams. The COGs will recruit BREXIT and other events to support their fatuous timetable of events for the "end of the age". For them, the key to prophecy, as HWA said, is BI. BI ranks with the moon being made out of green cheese as a truth proposition. BI is easily proved to be false. Hence, the key of prophecy dies a dismal but unacknowledged death. BI is not abandoned because it is a money-maker considering the racially oriented proclivities of the COG base. Look what happened to WCG/GCI when it abandoned BI - its tithe base mostly fled away. For people with low self-esteem, a condition nurtured by the brutal and judgmental COG ministries for purposes of control and grabbing money, BI is a delectable and necessary belief.

Brexit affair will not cause the cults to grow. It does nothing for them. BI is bull and HWA's prophetic record does not exist in his favor. The information age will expose their folly.

Does it not occur to you that any church started filling when the First Gulf War was declared to liberate Kuwait? Or that militant Islam was virtually non existent 40 years ago. At least not as we have it now.

I can see any crackpot religion grow under the right circumstance.

I see crazy believers who believe EU will fall apart. In reality if the Brits do not go the streets in the millions the coming week and protest in order to annul the consultative referendum the END for the UNITED kingdom is NIGH.

As a matter of fact I believe that is what will occur. It is IMPOSSIBLE to leave the largest trading bloc in the world and not suffer the consequences and the British people are beginning to see that.

Armstrongism, a version of it, political fascism I don't care. Anything might rise in the UK once the full consequence of this ill decision starts to hit the UK and people will start to kling to anything that might deliver them from the evil they have subjected themselves to.

I am not saying that there should be massive immigration in the EU. (Although it seemed to work in the USA for a long time.)

I am saying that you cannot go it alone.
And to prove my point I would invite you to visit China once and see the vibrant, energetic, unstoppable growth they are creating by working 25 hours per day, despite of some negative comments on China you might read now and then in your local news source.

Those billions cannot be competed with unless you are part of your local trade bloc, wherever you are in the world (South East Asia, Europe, The Americas, wherever).

Correct. If you are going up against a huge entity, you will lose if you attempt to take them on alone. The UK was powerful and prosperous when a group of islands in which the power was concentrated had leveraged numerous colonies in their defense and favor. This arrangement pretty much collapsed following WWII. The EU approximated its replacement by making the UK part of a greater collective once again. In the days of the Empire, Britain held sovereignty. In the EU, there was an unelected layer of government overseeing them.

British citizens should take to the streets, demanding another referendum.

As more of the actual facts come out, it appears that the voters were lied to. Some of the areas which voted strongly to leave are now discovering that their districts, unbeknownst to them, were being subsidized by the EU, and now because of their vote, they stand to lose all of the euros that were pouring in from Brussels. The immediate consequence is that financial conditions will worsen for them.

Also, foreigners and minorities amongst them are being taunted, mistreated, and made to feel like they are no longer welcome. They are being asked why they are not on planes enroute to their homes.

Globalism is in big trouble, and it seems that people are losing their humanity.

The reality is that the disadvantaged demographic in England and Wales that fell for the dog-whistle anti-immigration rhetoric - believing the unbelievable promises about prosperity and increased social funding..

Does higher population density = prosperity?
If true, Luzon w/ 100m pop should be better than NZ.