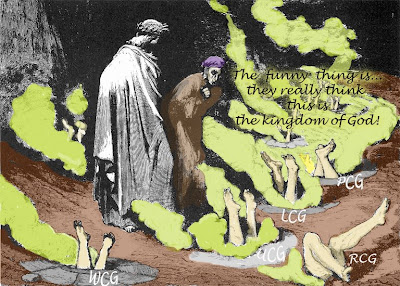 From Bill F. of Ekklesia fame. For the full effect, click to enlarge.

The Bible itself paints a very good picture of the kingdom on earth. The wicked are destroyed and become ashes under the soles of the feet of the saints.

Who are the wicked? Those who don't believe in the silly nonsense of the Christian religion.

What is the kingdom on earth really like? Read Judges, that's the "shadow" of "good things" to come. Nice, huh? Those really at peace are the ashes under the soles of the feet of the saints.

RCG's body and legs are not in deep enough!

What disturbs me is that the British Israel racism has even crept into this cartoon on a subliminal level. Look at all the legs and feet! Minorities are not represented. Everyone is white!

Which circle of hell does this represent -- because it was disclosed that the 10th circle was under construction because of crowded conditions -- especially because of the various Churches of God?

"Minorities are not represented. Everyone is white!"

"An African-American can't even get into the white man's Hell!"

They all get a slice!

Some with more cheese than others.

Which circle of hell does this represent?

Pictured are Dante and Virgil are on the rim of the third pit of Circle VIII for those guilty of Simony. These sinners used their positions in the church for personal monetary gain. The Simonists are upside-down in round holes the size of baptismal fonts.

The two themes of religion and divine retribution collide in this chasm where the Simonists reside. Simonists, named after Simon the Magus, are souls who sold ecclesiastic favors and offices for their own personal wealth.

These sinners, the Simonists, are upside-down in holes resembling baptismal fonts, illustrating that their sin debased their office, and their feet are on fire, most likely lit by the oil of the last rites. Their time in the font is limited, however. When a new sinner comes, he takes the previous sinner’s place, and the previous sinner is shoved down into the rock for eternity, much like the succession of Simonists in office.

These sinners are punished in a manner that is a curious reversal of baptismal practices of the time: Even the burning feet are from the oil used in baptism instead of the cool sweetness of the holy water.

Dante clearly finds these sinners despicable enough to pause in the narrative for a moment and rebuke them harshly. This act does not happen often in Inferno, and it is significant because it illustrates Dante’s abhorrence of the corruption of the church that he held so dear.

Most timely Gavin, as the Divine Comedia is set around Easter weekend. It begins on Good Friday of the year 1300, "midway in the journey of our life", and so opens in medias res. Dante is thirty-five years old, half of the biblically allotted age of 70 (Psalm 90:10), lost in a dark wood (perhaps, allegorically, contemplating suicide—as "wood" is figured in Canto XIII, and also the mention of suicide is made in Canto I of Purgatorio with "This man has not yet seen his last evening; But, through his madness, was so close to it, That there was hardly time to turn about" implying that when Virgil came to him he was on the verge of suicide or morally passing the point of no return), assailed by beasts (a lion, a leopard, and a she-wolf; allegorical depictions of temptations towards sin) he cannot evade, and unable to find the "straight way" to salvation (symbolized by the sun behind the mountain). Conscious that he is ruining himself, that he is falling into a "deep place" where the sun is silent, Dante is at last rescued by Virgil, and the two of them begin their journey to the underworld. Each sin's punishment in Inferno is a symbolic instance of poetic justice; for example, the fortune-tellers have to walk forwards with their heads on backwards, unable to see what is ahead, because they tried to do so in life.

Three beasts deter Dante as he attempts to climb the sunlit hill in the poem’s beginning. It makes sense that these creatures represent dark forces that threaten mankind. The three beasts have a biblical parallel to Jeremiah 5: 6. The verse says, “Wherefore a lion out of the forest shall slay them, and a wolf of the evenings shall spoil them, and a leopard shall watch over their cities.”

Everyone must overcome trials to reach God’s eternal salvation.

In the previous thread, this was my reply to Kscribe; "BTW, I took one quick glance at your web site and thought that I had visited Dante's Inferno."

Dante's Inferno and Kscribe's Aphabet Soup are only fictional representation of hell, but the reality is much more terrifying, not to mention the dreams that may come when "we" shuffled off this mortal coil.

I would have thought that all atheists and HWA haters would trembling in their boots as they march towards the flames, where their worm dies not!

I heard that Dante got his inspiration for hell from the marble mines in Tuscany...go figure!

Got that bit of trivia from watching Anthony Bourdain on the Travel Channel.

I would have thought that all atheists and HWA haters would trembling in their boots as they march towards the flames, where their worm dies not!

And all a Christian needs to know about Herbert Armstrong is Jesus' words in Matthew 7:15.

"I would have thought that all atheists and HWA haters would trembling in their boots as they march towards the flames..."

If HWA is one of god's favorite sons, to receive power and glory in the Wonderful World Tomorrow, I won't be marching toward the flames, I'll be running. Running toward a merciful end out of the nightmare that came true- a psychotic, schizophrenic god who exalts drunken child molesters over people like Mother Teresa. That god can kiss my ass.

Cute picture. Not really furthering any credibility, though.

Lussenheide said...
"RCG's body and legs are not in deep enough!"

And did you notice how the RCG legs are spread open a lot more than all the other sets of legs.. How very vulnerable they are to being violated?

Very symbolic of the way Pack viotates his membership. Especially so after his clarion call to pay off his debts and build his corporate real estate holdings.