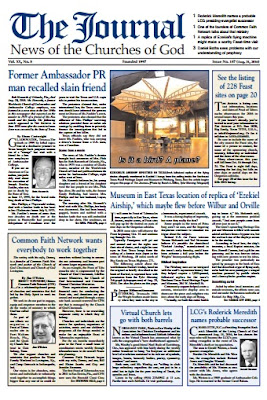 The Journal has its critics, but I don't count myself among them. Setting aside the issue of the awful advertising section (a print publication obviously has its costs, and publishers can't afford to be choosy) the editorial policy is remarkably open. Old time Herbalists rub shoulders - or column inches - with more progressive voices. It's a remarkable balance that Dixon Cartwright maintains... and obviously he also has views of his own which he is remarkably constrained in presenting.

If you want proof The Journal isn't just a lapdog publication pushing a traditional COG line, witness the lack of enthusiasm for it among the major (and many minor) COG sects. When was the last time you saw an ad - or even a press release - from the United Church of God appearing in its pages. Or COGWA? LCG? PCG? RCG? These bodies - some more-so than others  - like to control information, putting it through the PR spin cycle before releasing it to the membership. For them The Journal is a nuisance factor they'd rather not deal with. Problematically for them, many of their members are of a different opinion.

All of which is preamble to a piece appearing in this issue by Wes White. Provocatively titled "Come ye, my people, out of the Republican Party", the title does it scant justice.


"The Church of God stands at a crossroads. Some see that current demographics are not in our favor and that many of our aging congregations will wither and die within a decade or so. Some realize there needs to be a change in how we approach evangelism and feeding the flock, but they don’t know what to do. Some agree that we must do a better job of bringing in younger people and keeping the young people we have or we will go the way of Shaker extinction... The purpose of this article is to suggest that the Churches of God consider a major paradigm shift. It’s obvious that our methods are not growing our groups. If we are to reverse the gentrification trend in the church, we must make major changes."

Of course many blog readers will be unimpressed having long ago abandoned any hope that the COGs could or should become kinder, gentler and more humane. Bring on the Shaker dissolution! Fair enough, it's a position I have some sympathy for, but that doesn't wash so well among those who remain on the fringes, locked in by residual belief, family, identity or just plain nostalgia.

The issues Wes White identifies are not all exactly those I'd identify with - but he certainly has a number of important ones in his sights. His list:

It's an article worth reading. You can be pretty sure the duffers in their suits will screw up their noses at what he has to say, but so what. That's the advantage of having an independent publication that can provide a forum for ideas like these, a place where the leaders have little power to shut down a conversation. White concludes:

"It is my belief that the current leadership of the Church of God will probably not agree with these observations and will continue in their current directions. However, it is my prayer that the ecclesia of the future will recognize the futility of these approaches and make a major paradigm shift after we have all gone on to sleep with our fathers."

That hope may be forlorn; too little too late, but I admire him for his stand.

Next time a further excerpt from the White article. Meantime the entire issue can be downloaded.

In the Ad pages at the back I do like Ken Westby's (mercifully short) paper defending Perbert's Polytheism.

I'd forgotten what an egregious heresy this was:
thus Westby must now defend the "faith once delivered" against creeping Tkachian fallout?

Wes White and his wife are indeed refreshing voices in the COG movement.

These churches of God are based on two things:

Neither of these factors are sufficient to create a Christian religion.

Nothing can 'save' the venue because it is worthless and has no seeds of redemption in it.

If anyone wants to see what a real viable Christian church would look like, try this:

In comparison, Armstrongism is simply empty, devoid of much more than the selfish interests of the leaders in the cult.

Dougie Becker (B.O. Mikey) is one of the most unpleasant people I've ever run into. He's not happy unless he's moaning about HWA or BI. When are you gonna get over it, Dougie? Can't find anything to give actual meaning to your life? Feeling useless, are you? --Dixon Cartwright

Wes White's views are refreshing in what seems a COG-wasteland culture broadly aligned with some of the most cult-like right-wing directions of the American body politic at large. But I agree with those who say the idea of a COG reform is hopeless. As Wes White accurately points out, he would name a "liberal" socially-conscious, social-gospel, etc. COG if he knew of any, but he does not know of a SINGLE ONE (can anyone name even a single one, among the dozen larger and hundreds of smaller COGlets?).

It did not have to be this way. The weekly sabbath (= mandatory paid vacations for workforces principle; rights for laborers) ... sabbatical year (mandatory periodic universal across-the-board consumer debt cancellations) ... no-usury (this goes to the jugular of western finance capitalism; compare Islamic banking for investment rewarded from shares of profits of enterprises but never from lending money itself at interest, so absolutely prohibited biblically for very sound historical reasons [read some Michael Hudson]) ... the repeated injunctions of compassion for widows, fatherless, poor, and the stranger and refugee, not simply privately but by the king's or state policies ... prophetic voices raised against militarism and imperialism (cp. Isa 14, Ezek 28) ... this is how, in an alternative reality, sabbatarian COG culture could have gone. But these all were roads not taken, even though at the very heart of the biblical foundation upon which the COG purported to be based. This kind of direction is how other evangelical Christian movements in history and at present have gone--in the abolitionist and civil rights movements of former generations, and their equivalents today.

Wes White's proposals seem a lost cause, though with this caveat: some component is indeed generational. Bigotry toward gays and hostility to interracial marriage, to name just two things, seem highly generational and likely to basically die out by themselves if there are future generations of COGs to speak of.

But part of Wes White's point is that there may not be much future for the COGs because of this very generational phenomenon. Why would thinking aware young persons, even if they do appreciate and value their parents, want to be part of such bigoted and time-warp-stuck attitudes? Where is the life and growth in it for them? Where is the chord of idealism touched? It is people like Martin Luther King of a former era, or Bernie Sanders of the past year, which struck a chord in young people of a possibility that things can be better, which speak to something in young people which is missing in conventional politicians and church leaderships.

Gavin is right that Dixon Cartwright's Journal is a good publication. It is not only that Dixon exercises long-time high standards of accuracy in his journalism (something not to be taken for granted). But in what other venue in COG-land could an essay like Wes White's be published or discussed?

But in what other venue in COG-land could an essay like Wes White's be published or discussed?

We would be very happy indeed if Wes White would like to post at The Painful Truth where the material could be freely discussed.

You don't think the Painful Truth site is just a tad, um, strident to reach the demographic Wes is trying to communicate with? As for Ambassador Report, I was a huge fan and subscriber, and there's still nothing like it for historical perspective, but time has moved us all on.

Gavin, I maintain that it doesn't make any difference since the Armstrongists (at least the leaders) are not going to pay any attention because they don't want to change.

Being in The Journal, particularly against the insanity of the ads there, only makes it infotainment to be read, enjoyed and then forgotten.

At least at The Painful Truth it won't be forgotten.

And as for the Ambassador Report, the attitudes, posturing and behaviors described there continue to this day in the ACoGs. Reading it isn't just historical, it's a perspective tool to enable people to understand what is happening today -- the same narcissism with the same sort of sociopaths continue pretty much unchanged except for the names on the door -- and sometimes the names on the door are the same. As Khan said in Star Trek II, "Nothing ever changes". That's absolute. The only thing that can evoke change is superior force because, really, it's not going to happen voluntarily just because it's the right thing to do.

As you have also observed, British Israelism is ridiculous. Because it is the very foundational core of Armstrongism, as long as its lies remain, the religion remains a weird cult led by kooks (as aptly given in Kooks: A Guide to the Outer Limits of Human Belief by Donna Kossy where, as an example of real journalism, she describes British Israelism in Chapter 3 where she explicitly names Herbert Armstrong as being a kook).

A point of anthropology. Botha states:

If we believe the Bible record we
have to accept that all people on
earth descended from Noah and his
family, the “eight souls, [who] were
saved through water [the Flood]” (1
Peter 3:20).
Three racial groups exist on earth:
Shemitic or Semitic, Hamitic and
Japhetic, named after the three sons of
Noah: Shem, Ham and Japheth.

Many people believe the Biblical record but do not believe his statement above. There are many racial groups on this planet not just three as evidenced by the science of genetics. My belief is that a group of clans in the Middle East are descended from a man named Noah and they are all of Haplogroup J. They are said to have spread to the Isles of the Gentiles and that is where we find them today on the Arabian peninsula but also around the coast of the Mediterranean. See map of Haplogroup J in Wikipedia.

The Armstrongist idea that the Russians are Asian because they are descended from Japheth (tubal and meschech) shows the irrationality that one comes to if the model Botha describes (derived from Herman Hoeh) is adopted and believed. The Russians are Haplogroup R1a. This is an Indo-European-related Haplogroup and not a Far Eastern haplogroup. The Russians, the Germans, many Scandinavians, some people in north India and the Slavs are all R1a and belong to the same race, if we wish to equate race with haplogroup. Yet the Herman Racial Model would make some of these people Hamitic, some Japhethic and some Semitic.

It is interesting that in WWII-vintage German racial pseudo-science the Slavs were always profound inferiors and yet the Slavs are a branch of the same race as the Germans.