As the Days of Herb Were 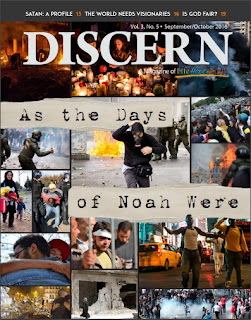 Wouldn't you know it, the lads at COGWA's Discern magazine have an article called Who Would Jesus Vote For? Erik Jones seems to have been channeling Rod Meredith. Nothing new under the dying Herbal sun.

Discern is the magazine you're having when you're not having a magazine. It's an el cheapo download... no hard copy subscriptions. Like other COG publications, it provides a constant stream of "ain't it awful" commentary. The world is going to wrack and ruin, nobody is keepin' the Ten Commandments, and the only hope left is a strong hand from someplace (nod, wink, the return of a militant Christ to smash recalcitrant kneecaps). Cue the article by Jim Franks, the sort of thing that wouldn't have been out of place in a 1940s Plain Truth.

David Treybig has his eye on the ancient enemy, Satan the Devil, and has helpfully written an article called Satan: A Profile. No mention of dualistic Zoroastrian mythology imported into Judaism. Hmm, wonder why. Could it be Dave doesn't know that stuff.

Jeremy Lallier writes about visionaries. His examples are biblical characters. Mike Bennett asks one of the dumber rhetorical questions: Is God Fair?

Behold brethren, a woman writer! Scott Ashley take note! Becky Sweat has a three-page article entitled You Don't Say! Neal Hogberg writes about modern-day slavery. Erik Jones returns with another piece on where the popular image of Jesus ("pale, long-haired") came from. Actually, I think Erik is caught in a time warp. Contemporary portrayals have changed from the doe-eyed Nordic dude to a more realistic image of a Palestinian Jew.

Joel Meeker writes his usual column - heaven knows why - and the back page promotes COGWA's laughably silly e-book called, ahem, The United States, Britain and the Commonwealth in Prophecy. Knock yourself out.

Downloadable... in fact, that's the only way you'll get a copy.

How is it that the same passages in Revelation can simultaneously be a recap of pre-historic events regarding the fall of Satan, and of future events concerning the apocalypse? (facepalm)

No, no, don't download The United States and British Commonwealth in prophecy, because it might lead to tragedy.

It's amusing to see all these magazines sticking to Herb's format & formula
They dare not deviate.