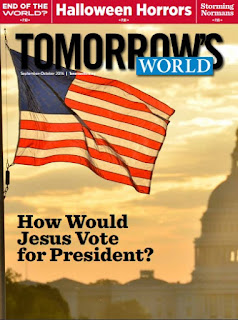 Are the old boys at LCG even capable of an original feature article concept? Nope. They just regurgitate the same old, same old from years - decades - gone by.

How Would Jesus Vote for President? Gimme a break. Halloween Horrors? Oh please...

But, what me worry, here's the skinny on the September/October issue.

Rod "Spanky" Meredith provides an editorial called "Admit the Cause of Problems." Ironic really, but I guess the man is totally incapable of any form of introspection. Rod's solution is the Ten Commandments.

Rod immediately follows up with the feature article, How Would Jesus Vote for President? It has as much relevance as which brand of cola Jesus would drink. For those of us outside the US it's also hard not to wonder why Jesus wouldn't be as interested in how they vote in Australia, Sweden or India. Myopic Meredith. Anyway, bottom line, its Satan's world, and apparently Spankyites should steer clear of the whole, evil electoral thing. I'd be willing to guess that a large number don't, though. The secret is not to let your LCG minister know - what he doesn't know won't hurt him. Anyway, he'll probably be ticking Trump too.

More politics (but don't vote!) as Laurence Hartshorne burbles on about life in Canada and governments at the turn of past century.

Richard Ames writes on The End of the World. Nothing new here, move along.

Simon R.D. Roberts provides a British focus. He's been reading Simon Schama and has decided to bless TW readers with his insightful thoughts - specifically on "The Norman Apocalypse." Of course BI is tied in. You can almost hear Schama groaning.

Rod McNair bursts a valve over Halloween. Jonathan McNair has a twee youth oriented column that no self-respecting teen would be bothered with.

Dougie Winnail has a lightweight piece about the coming of Jesus Christ as a turning point in world history. Wally Smith seeks to educate us about hummingbirds. Mark Sandor wonders if you've missed the "long predicted" Brexit developments.

Yes, it's a precious and original issue. Downloadable. Just to be fair to the lads over in UCG, it's worth pointing out that no female writer was let near the editor's in-tray here either.

I am watching snippets of a documentary called "Holy Hell" on CNN. Brings back memories.