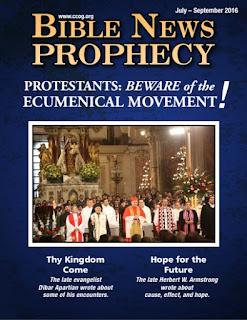 I apologize. AW has been woefully neglectful of the CCG and its wondrously gifted prophet Bob Thiel. That's partly because Bob is irrelevant, given to delusions of competence and self-proclaimed master of a puddle-sized splinter sect, but nonetheless he battles on, secure in his own fantasies, and he does manage to attract some small attention from two groups; those few poor souls who take him seriously and those who think he's just plain bizarre.

In any case, the quarterly Bob magazine, grandiosely titled Bible News Prophecy (shouldn't that be Bible News and Prophecy?) is out there and ready for eager readers to devour the prophet's primer-level, semi-literate prose. Two dead men wrote a couple of the articles - handily copyright free from long ago. One was Herb Armstrong (lifted from a 1977 PT), the other by Dibar Apartian (from a 1966 GN). 1966 - dear lord, that was the year before they relaunched Dragnet! Too bad Sergeant Joe Friday and Officer Bill Gannon aren't around now to knock on Bob's door and sort the poor schmuck out. Apartian has been claimed by Thiel as a silent supporter of his unique gifts and a critic of his onetime idol-turned-nemesis, Rod Meredith, despite retaining his status as an evangelist in Meredith's Living Church of God at the time of his death, so Bob is attempting to twist the knife. Mind you, I doubt the old fossils who run things over in Charlotte have even noticed. 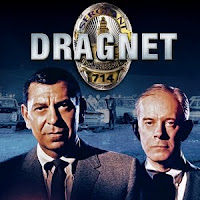 Apart from the reruns of Herb and Dibar's stuff, everything else comes from the prophet's very own pen. The lead article screams PROTESTANTS: BEWARE of the ECUMENICAL MOVEMENT!

Bob, sit down and let me explain something to you. Protestant churches - with the exception of a number of fundamentalist retard denominations - created the ecumenical movement.

To be honest, in my view Bob is a complete dead end. His tiny Continuing Church of God is a vanity project that has a future only as long as Bob's personal longevity, and nobody lives forever. I guess it generates a nice little income in the meantime. So why bother even mentioning him? Well, Bible News Prophecy is, if nothing else, a sobering example - or mildly amusing if you think of it from another angle - of extreme nuttiness and dilettantism parading in proof-texting drag. As they say, whatever spins your wheels...

Downloadable (but not recommended).

More pathetic drivel from Thiel. It is dreadful how he tries to project his fanaticism and idiosyncratic views to as many people as possible. He would do the world a much better favor if he simply stopped promoting any form of Armstrongism.

So Protestants created ecumenism. Thank you for saying that. We now see that Armstrongism is yet again wrong on yet another topic.

On other news the latest issue of PCG's recruitment magazine is out. Here's my little overview of it.

The Armstrongist churches are an insane asylum where the patients don't realize how sick they are and those who would be responsible for treatment have either departed long ago or are completely ignored.

So the insanity flourishes, albeit, the insane asylum is badly in need of reconstruction as the paint peels and the walls fall down from unbridled entropy.

And they have their own publication: The Journal -- Window to the insane asylum of the churches of God.


"Prophecy", that sounds harmless and intriguing.
Who isn't interested in knowing the future?

But should reader progress to the point of being inducted into the movement,
(unlikely)it will be revealed that "Dr? Thiel" is the Prophet!

While we can lampoon these various COG rags, we should not lose sight of the fact that there are real people who are seriously enslaved to this Armstrongist doctrine. They cannot get away from it without outside intervention and deprogramming. It has warped their thought processes and is eroding their lives and they have no idea what is happening. They believe "all is well with my soul" when nothing could be less the case.

The entire Armstrongist movement is being perpetuated by a mindset that was brain-washed into place. So the authors and the readers of these rags are unified in their pathological viewpoint. And these rags are some of the instruments by which this sad indoctrination is perpetuated.

When they read the words I have just written, they cannot understand them. They will twist these ideas to be something else - something that tells them that they are right in their Armstrongist stance. I have seen this dreadful reversing process enacted.

Maybe these COG writers will get their way on some points. We may be on the near edge of apocalypse. There is a broad opinion that Donald Trump wants to use nuclear weapons against ISIS and whomever else. Maybe we will soon step into the age of nuclear war with all of its consequences.

Then we will all go to hell in a hand-basket just like the rag writers have been prophesying. And I mean all, including the Armstrongists. Their glowing descriptions of the Place of Safety are just as fictional as all the talk back in the Seventies about HWA and GTA being the Two Witnesses. All the talk about the Times of the Gentiles expiring in 1984. All sound and fury signifying nothing.

An added point: Armstrongists have long criticized the United States for having no pride in its power. The pride of Israel's power has been broken. Perhaps, Trump will remedy that by use of nuclear weapons to solve regional conflicts. And then the Armstrongists will come to see what "pride in power" really means to their great dismay. And the stout words of the rag writers will go limp.

And while I am on the topic: Why don't the Armstrongist rag writers come out in favor strongly of Donald Trump? Isn't he their ideal "Man of God?"

1. He is a white, male "Israelite."
2. He wants to factor minorities out of our society - oppressively if necessary.
3. He is pro-Israel and anti-Arab. I exclude the anti-Semitic faction in the UCG.
4. He wants to restore the pride of America's power with nuclear war if necessary.
5. He seems to regard women as a lesser species.
6. He is wealthy (Seven Laws of Success, right? You have to sell a lot of Shaklee to get where he is).
7. He is a "powerful speaker", willing to loudly express his opinions as truth.
8. He has full confidence in his talents as a leader.
9. He has big hair.
10. He wears expensive suits.

OK, I was going for 12 or 19 points but I couldn't make it. I have to shortly attend a meeting.

Even though the rag writers would not suggest voting, why are they not characterizing this guy as the Armstrongist messiah - a real Armstrongist "David" running for office. After all, even HWA said that Teddy Kennedy had good leadership qualities.

This is a paradox I cannot explain. Instead of writing about "happy days are here again", the rag writers are continuing to fear monger about the decline of our society. Well, no doubt they will malign H. Clinton if she gets into office. Maligning seems to be their way.

Dr? Thiel:
Notice something about the HWA article you reprinted:
It is short and to the point.
You should learn from him, because your writing is garrulous, rambling and excruciatingly boring.

Proving once again that a fool can have any I.Q.

As the caption on Bob's photo in Painful Truth's Deck of Shame (spoiler!) "Has an opinion about everything."

Rather than cross the line like other COG leaders, Bob never picks specific dates. In fact, he usually gives his few on why dates others choose can't be right. His prophetic method is to splatter a target on the broad side of a barn with a blunderbuss - and just talk about the shot that come close to the target.

Besides copying old PT and GN articles, sometimes Bob dabbles into using what HWA called "the Plain Truth style". And did you notice the oversized exclamation mark on the front of the BNP cover? Another dated touch.

A mention about "the Plain Truth style" - HWA wrote that he rejected Herman Hoeh's original articles until he mastered that style. Right, start a college that has a proper English teacher to teach composition, and then he turns a student into hacks to get published. I wonder if HH was once able to write proper academic prose?